There are a few things you need to know if you’re flying Turkish Airlines via Istanbul and have to spend 23 hours there.

If you have a transit layover longer than 10 hours due to their schedule, they provide you a free stay at Istanbul airport hotel. The ‘their schedule’ part is the important bit, because it means you’re not entitled to a free hotel if there’s an alternative flight for their connecting leg which has a gap of less than 10 hours for the layover. (I was hoping that someone at their transit desk wouldn’t know the distinction well enough or give me a room anyway, but no luck.)

Turkish Airlines also offer a free tour of Istanbul at specific times during the day. This is an excellent way of eking out more out of your layover. You do need to pay for tourist visa though as you’ll have to pass through passport control landside.

Failing everything, you can always sleep like a hobo. 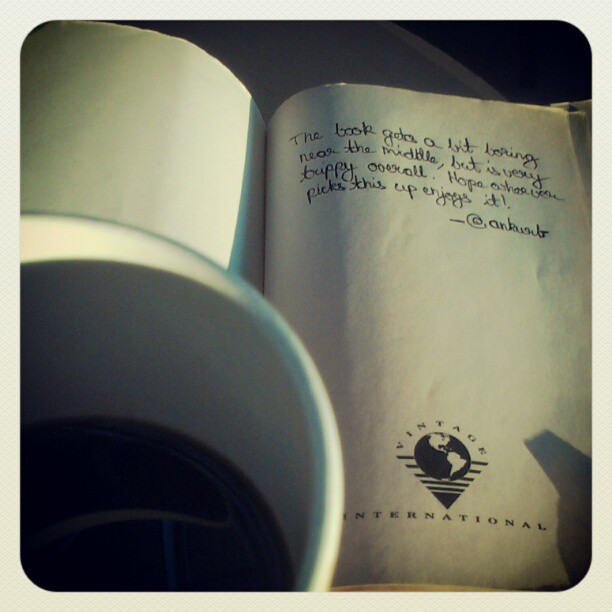 I often used to buy used or “one-off read” books when travelling. Most hip hostels offer some kind of book exchange; this is where I tend to pick them up. And thus started a ritual – inspired by Paul Carr’s The Upgrade: whenever I’m at an airport or a train station or just at a café when I happen to finish reading these one-off books, I leave them behind with a short review. The rationale is that a book that would otherwise have stagnated on my shelf gets a new life and keeps another traveller company.

I like sticking around to see who picks the book up. (Mea culpa, I can be creepy.) It’s fun to note how much time each book takes to be picked because people do judge a book by its cover. Most passengers at an airport are in a hurry anyway and don’t like to pick up books which don’t immediately scream out “this is an easy read!”. What I’ve found works best is to leave it behind at a Starbucks or similarly ‘upmarket’ coffee chain; presumably because people stopping by at a cafe have time to kill. It’s also a question of logistics: if you leave it behind in a restaurant instead, books left behind are sure to be cleared away by waiters.

Some books are harder to get picked up than others. The one in the photo above (Tripmaster Monkey by Maxine Hong Kingston – a used book that I bought from a friend when I was in Singapore) was a particularly tough one. Interesting books get looked at regardless. Less striking ones…I can only assume passers-by think it’s being used to reserve a table. Sometimes I need to leave a note outside the book too saying that it can be picked up for free.

I leave behind my Twitter handle on those reviews too. I hope to hear back from someone who’s picked up my books some day. And I hope they pass it on when they finish too.

Now that I own a Kindle, I hardly ever buy paper books. I’ve slowly been giving away my entire book collection: either by gifting it to friends or by leaving it behind in public places like this.

I missed my first flight ever, this weekend when flying back to Delhi. My flight was at 1050, I woke up at 0920. I felt incredibly helpless and frustrated that this happened because I overslept, due to medication that knocks me out as a side effect.

I don’t know why I spent £45 on a taxi to take me from Guildford to Gatwick; there was no way I was going to make the flight. The woman at Turkish Airlines counter was quite helpful when I explained my situation to her. While I looked for alternative flights online, she checked on their system for how much it would cost to rebook on a different date. I’d bought my tickets at an incredibly cheap promotional price of £400 round-trip from London to Delhi, way back in August. And the news was bad: I’d have to spend £530 to pay for the fare difference if I wanted to fly the next day.

I almost didn’t take it. I haven’t been back to Delhi for two years because to me it boils down to simple economics: given the choice of spending £600-800 on return tickets to Delhi, or spending the same amount cumulatively going on a holiday elsewhere, I’d rather take the holiday. I’d rather take a new experience over an old one.

I’ve discussed this need I feel to constantly somewhere else often with my therapist. At the root of what I’ve been trying to get to is why do I want to avoid going back to Delhi? I spent a sizeable chunk of my life there and despite the ties I have to the place, I don’t find myself drawn back. I don’t know the answer why – and now with a missed flight I found myself with a solid excuse to bail on the trip. I really didn’t want to spend an extra £600 (once I threw in lounge access, food during layover, et al), partly because I didn’t even have that much money in my UK bank account.

Such situations crop up constantly when travelling. Things don’t go according to plan and then you need to make a snap decision: do I pay a high sum of money to do what I wanted to anyway, or bail? I found myself thinking of how much I agreed with Seth Kugel’s The Argument Against Pound-Foolish Travel. One thing I’ve learned while travelling is to never walk away from something writing it off as “too expensive” because if it’s something that caught my attention, I will regret not doing it when I think of that trip. And more than my family, what I found myself thinking is that I owed it to my therapist to explore what is it exactly that makes me want to avoid Delhi. My therapist! I’m more concerned about what my therapist thinks of me than my family.

Have you noticed the awkwardness yet? I danced all over the place in the above paragraphs to avoid using “home” and “Delhi” in the same sentence. Because I simply find myself unable to call any place “home” with conviction.

In the end, I just felt like I was having this same fucking conversation over and over again with myself. I wanted to put an end to that. I emptied my Indian and UK bank accounts out to buy myself that amended ticket. And you know what I found myself excited about? Not the flying back. I found myself excited about the fact that I would have a 23 hour layover in Istanbul airport “because it would be a new experience”.

Sometimes I do wonder what’s wrong with me.

There’s something about airports that I find oddly calming. An airport is one of those places where time loses meaning – like a casino – yet the pace of human activity round-the-clock is so measured. The cavernous halls just seem to swallow up all sound. There’s a faint murmur of snappy footsteps on tiles and the click of luggage wheels. I find this atmosphere to be incredibly Zen – an epitome of ‘the state of being‘.

I couldn’t blag a free hotel stay, so I headed to the lounges. Oh how I agonised over not trying to look like an unwashed backpacker (which I pretty much was by that point). But before I paid, I asked one of the other travellers in the queue whether he’d sign me in as a guest. And he did! Sometimes, you just have to ask.

I was looking forward to my layover as it would offer me an excellent opportunity for people watching. It’s calming to simply zone out and watch people go by in a busy place like an airport, trying to think about the story of how they got here and where they are heading to. A businessman in an expensive looking suit and a fancy briefcase sprawled across a bench sleeping – how did he not get himself a hotel? The girl working the graveyard shift at a pastry shop. The woman in Versace trousers walking barefoot, carrying broken heels in her hands. The chef at a food court restaurant laying out fresh baklava in the morning. The guard who was all for giving me a tough grilling at a security checkpoint…until I spoke the few Turkish phrases I knew, whence he immediately changed his attitude and waved me along smilingly. A kid who was crawling around a busy terminal gate, his parents seemingly didn’t care about keeping an eye out.

Somehow, these characters I notice at airports stick with me. I think it’s because it’s a time when I slow down and just ‘be’ in the moment.

2 replies on “23 hours in Istanbul airport”

I like your idea of leaving behind books! I don’t think I’ll be doing that anytime soon (I rarely read at airports, plus I’m a little too attached to my books) but who knows.

As for your not wanting to go back home – I know an overwhelming majority of people do feel like being back home all the time, but I don’t see what’s wrong in not wanting to, especially for people who like travelling and exploring new places. After all, you lived at home for nearly two decades, right?

That’s what I keep telling myself. About the last bit. But I still feel guilty at times.