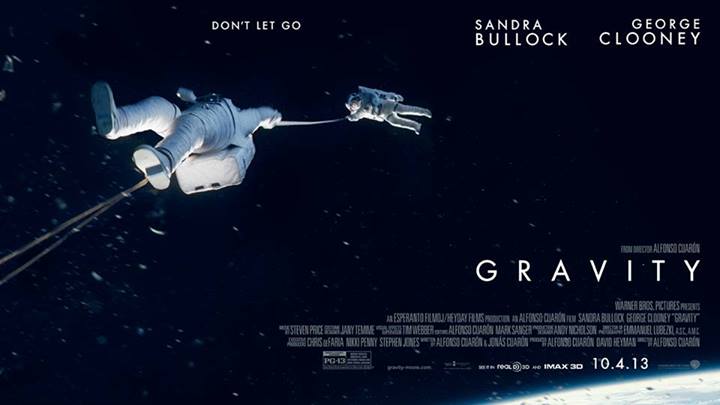 Gravity is the latest critically acclaimed film from Mexican director Alfonso Cuaron. With a minimal cast of Sandra Bullock and George Clooney, both in the role of NASA astronauts, the film tells the story of a disaster in space where the two astronauts are left adrift in space after debris from a disintegrated satellite causes a chain reaction of collisions with other space satellites. Even though the plot might seem outlandish, it is in fact based in a scientific hypothesis (called Kessler Effect) which predicts such as situation can actually happen. When their space shuttle gets shredded by debris and communication satellites get taken down too, leaving no way of contacting Earth, the two astronauts have to use their own wits to survive as long as they can.

Gravity is a film truly enjoyed in 3D, to capture the full effect of zero gravity so exquisitely captured in this film. The desolation and beauty of outer space is accentuated by the carefully-planned 3D shots and judicious use of dead silence in the soundtrack. The writers (Cuaron and his son) get the balance between the human aspect of the situation and the technical realities behind a story just right. I wouldn’t be surprised Gravity is a shoe-in for at least a couple of Oscars this year.

Make no mistake: this is a serious film with slow plot development that might turn many moviegoers off. Yet, if you are willing to look past that, it’s a brilliant film about the brave men and women who risk their lives in outer space for broadening the horizons of human knowledge.

The Fifth Estate is the highly-publicised film about the story of Wikileaks, starring Benedict Cumberbatch. While I have followed Wikileaks closely ever since its “Collateral Murder” leak of the US Army killing Reuters journalists in Afghanistan, for most viewers the entity of Wikileaks is something they certainly would have heard of in the news, but not know in detail about.

The story is primarily told from the perspective of Daniel Berg, played by Rush star Daniel Bruhl, an early Wikileaks volunteer who gets involved because he almost hero-worships Julian Assange, the Wikileaks founder. The plot then follows the rise of Wikileaks through its initial teething stages, and eventual notoriety through its leaks about the US military and diplomatic regime.

Much of the attention around the film has been focussed around Benedict Cumberbatch’s portrayal of the larger-than-life persona of Julian Assange, because of the rabid fandom Cumberbatch has accumulated in recent years because of his role in BBC series Sherlock. It’s only fair to take to Cumberbatch to task, then, for a half-assed effort, speaking in a British accent for most of the time and only occasionally slipping into stressing Assange’s Australian accent by saying “nitwurks” instead of “networks”. (In terms of bad effort, this was only slightly better than Daniel Craig’s “Israeli” accent in Munich – “The only blid that matters is Jewish blid”.)

A major problem with the film is that it feels like a dramatic reading of Daniel Berg’s book about Wikileaks, which is the source material for the story, rather than trying to stand as a screenplay of its own. Director Bill Condon – formerly associated with Chicago, Dreamgirls, and Twilight Breaking Dawn – feels like a terrible choice as he resorts to dated visualisations of rows of desks to try and represent the technical concepts in the film. A lot of screen time is devoted to watching people type on a screen in an effort to portray “the drama unfolding”. Yet, this misses the point: what makes the story of Wikileaks interesting is not the use of technology per se, but the confluence of different personalities that gave rise to it. The Social Network, for instance, was a film that understood this motivation well and focussed on the personalities rather than the technical details.

My friend commented that she learnt more about Wikileaks by reading its Wikipedia article rather than watching The Fifth Estate. In attempting a documentary approach, it misses the exciting story of the people behind the story as well as feels too long a film to properly portray all the events. The only redeeming feature was a fourth-wall breaking piece-to-camera from Cumberbatch at the end of the film, but by that point it’s a silly gimmick from a dumb film attempting to appear smart.