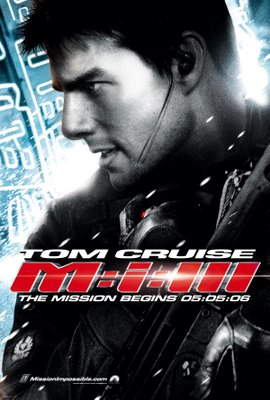 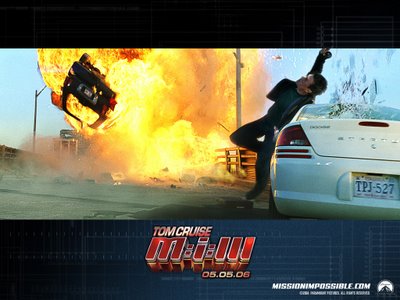 Too long a wait for Indian fans. Mission Impossible 3 was released in the US and other territories, and now it comes to India. Actually, scheduled release date was 24th June 2006 here, so we’re lucky to get it early. So my happiness knew no bounds when I got tickets to a special preview show for 8th June, one day before India release date. 😛

MI3, like the earlier two ones, sticks true to the MI franchise and provides non-stop action, with Tom Cruise, arguably THE best actor dangling from angles which I didn’t even knew existed. I will spoil the surprise a bit by telling you interesting bits. But you’ll know better what to watch out for, or if unfortunately you can’t go to see the movie, then burn with jealousy. 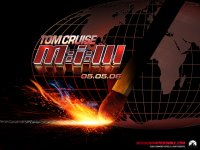 In Mission: Impossible III, agent Ethan Hunt (Tom Cruise) of the IMF (Impossible Mission Force) has retired from active duty, and works on training new agents. He also gets engaged to his love, Julia (Michelle Monaghan), who doesn’t know about his work at IMF, but it seems destiny doesn’t want a quiet family life for him. In comes an assignment, to rescue an agent, Lindsey Farris (Keri Russell) who has been kidnapped and held hostage in Berlin by the gang members of international weapons supplier, Owen Davian (Philip Seymour Hoffman). In true MI style, the assignment message hidden in a camera destroys itself (I always love that tape-going-up-in-a-puff-of-smoke thing). 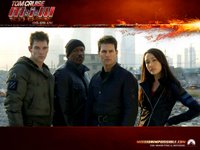 So a rescue team is assembled, with Ethan Hunt – back comes Luther Strickell (Ving Rhames), the computer expert. Newcomers are transportation expert Declan (Jonathan Rhys Meyers) and background operative Zhen Li (Maggie Q). The team sticks to him till the end, and are an important part of the story. Apart from Tom Cruise’s intense performance, Ving Rhames too comes out well, with director JJ Abrams exploring Luther’s funny side. A more personal side of the companionship between Ethan and Luther is also shown, which is one the high points of the movie. Luther also, is the only member who works with Ethan through all the MI films.

Off goes the rescue party to Berlin, to a factory where agent Lindsey is being kept hostage. There starts off the breathtaking action, with a storming-in, and almost single handed rescue by Ethan. More details, watch it yourself. After a jump from a six-story building, the team tries to escape on a helicopter, only to be pursued by the their enemy on another one. Here there’s an exciting ‘helicopter chase’ in a wind farm, with regulation missile firing and anti-missile measures, all while trying to evade the blades of windmills. At the same time, Ethan tries to save agent Lindsey from a timed explosive capsule inside her head by defribilating her, but fails tantalizingly close in doing so because the defribilator took time to store the charge. 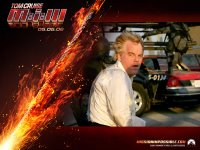 After this failed mission, Ethan gets reprimanded by Theodore Brassel (Laurence Fishburne), the head of IMF. Second-in-command Musgrave (Billy Crudup) tries to partake the blame, and gets a piece of Brassel’s mind too. This, and Ethan Hunt’s attachment to ‘the most talented agent I’ve seen (Lindsey)’ drives him to take revenge against Owen Davian, without clearance from his superiors at IMF. His plan – to kidnap him from a party in the Vatican City, bring him to IMF headquarters, and question him about the mysterious ‘Rabbit’s Foot’ – around which a major part of the movie revolves. The ‘Rabbit’s Foot’ is a super-powerful weapon which major international terrorist organizations are vying for, that’s all we are told. Or as another IMF computer expert, Benji Dunn (Simon Pegg) puts it, ‘It could be a very expensive piece of rabbit appendage’. The only clue they’ve to work on is email correspondence about Davian’s whereabouts, recovered from ‘crispy’ hard drives from laptops taken during the factory raid in Berlin. There’s a funny bit here, when Ethan and Julia decide to get married in the hospital itself, where Julia works, without a ‘proper’ ring. 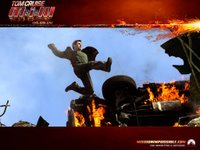 The kidnapping of Owen Davian from the Vatican is THE BEST PART of the movie. Go to watch this one just for this, even if you hate Tom Cruise (although I don’t understand why many people do so). The whole thing is brilliantly executed, with the break-in into the Vatican, the way the team members get in differently, the way they make Ethan look like a clone of Davian for capturing him, etc. Planned meticulously down to the last bit, it’d be a shame if I give this part away. Watch out for a particularly funny bit in a Vatican bathroom, where they capture Davian, and clone-type-substitute Ethan has to act like him in front of a bodyguard. Then there’s the escape, where they make it look like Davian has been called up by blowing up a cool-looking Lamborghini (agent Zhen does say here ‘I love that car’). You also have the fleeing scene on Tiber river. There’s an impromptu interrogation of Owen onboard their transport plane while the team is going back to the US, where Owen promises to make Ethan pay for it by hurting his wife, and then killing him. 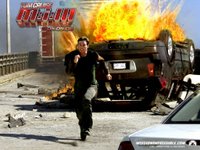 You would have barely recovered from the Vatican part, when wham, comes the bridge attack on IMF team on Chesapeake Bay Bridge, one of the ‘centerpiece stunts’ as the producers call it. Here you have agent Hunt leaping over gaping holes in the bridge, ducking missiles, and trying to stop Owen Davian from being rescued by his pals, all in combat uniform on a helicopter. The action here will shock-and-awe you. Also on the way they decode a microdot sent long ago by agent Farris, warning them that Brassel may be collaborating with Owen.

Later, Julia is kidnapped; and agent Hunt is arrested by the IMF, but he escapes with help from Musgreave. He then leaves for Shanghai, followed later by his team, to get Davian the ‘Rabbit’s Foot’; because Davian’s threatened to kill Julia if Ethan doesn’t bring it to him within 48 hours. 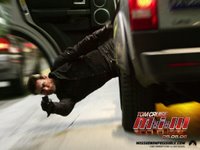 The Shanghai heist of the ‘Rabbit’s Foot’ has a jaw-dropping stunt where agent Hunt leaps off a building to land on the adjacent one housing the ‘Rabbit’s Foot’. Even a seasoned B.A.S.E. jumper would be awed by this stunt. We don’t actually get to see how he steals it, but he somehow does, and there’s a parachute drop onto a busy Shanghai street, followed by a car chase. I’d rate the Shanghai bit second after the Vatican.

Ethan then gets taken to (unconscious) to Davian, where a timed explosive charge is inserted into his head (nasally) and when he wakes up, Davian apparently kills his wife in front of him. Soon, we come to know that she is actually alive, and Musgrave is the one in league with Davian, for very political reasons. We have a happy ending (obvious, duh, they need to make sequels), with Davian and Musgrave dead, and Ethan ‘brought back to life’ by his wife after he gives himself a huge electricity jolt to defuse the explosive charge in his head. We come to know Brassel’s not a bad guy after all. 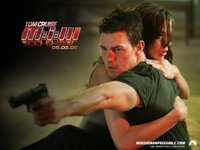 MI3 has pretty complex storyline, like other in the series, which demands constant viewer attention, but that is assured due to really fantastic stunts that come patented with it. But there is sarcastic humor too, even in the most intense action sequences, weaved in inextricably; it’s never in-your-face slapstick, always subtle rhetoric. To his credit, director J. J. Abrams (he’s the guy who’s directed the hit TV series, Lost, and also worked on the screenplay of another of my fave movies, Armageddon), who also co-wrote the story, he doesn’t make it come across as super-slick and is far more grounded in reality. The whole cast puts up a very good show, with special mention for Tom Cruise and Ving Rhames. Tom Cruise is EXCELLENT, as usual, and even Philip Seymour Hoffman plays the ‘perfect’ villian; he genuinely appears evil. 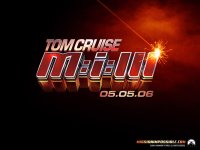 Do visit the official site (link at top). And take time out to watch this movie, you’ll love it. Watch for the mindless and clever action thriller it is, and don’t expect a cerebral-faculty-taxing movie, and then you’ll enjoy it. And all the gizmos and the technology, a bit dumbed down from the earlier two, will have you drooling. And keep in mind that this movie got a PG-13 in the US ‘for intense sequences of frenetic violence & menace, disturbing images & some sensuality‘. Maybe a bit over-cautious, but I thought it best to inform readers. The humor does get a bit, um, dirty at times (like Luther asking Ethan if he ever slept with ‘little sister’ Lindsey, after he was worked up about losing her).

A piece of advice: Make it short and sweet from next time.

I like reading movie reviews and your review is great! Hope I see the movie soon!

UPDATE – A trailer of MI3 has been added! Enjoy!

Please, don’t compare it with that horrendous movie, MI:II.