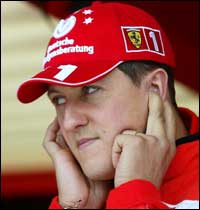 Ah so it all ends. Not exactly in the way fans of Schumi would have wanted it to be, with a victory to lap it up all, but still he went out with more than enough to prove that he was among the greatest race drivers of all time. Going from go-karting in his childhood to the beasts he drove in these times, he definitely turned The Prancing Horse’s fortunes around when he joined Ferrari.

Me as a computer enthusiast would also like to point out here that AMD was one of the major sponsors of Ferrari, and Schumi had endorsed the Acer Ferrari range. Hope that stays, because those powerful machines look nice next to Schumi.

With his deparature, I definitely think F1 won’t stay the same. ‘Iceman’ Kimi now joins Ferrari, new teams are in the doldrums and there are going to be so many driver changes next season. Plus, no Bridgestone.

I think what drew most fans to Michael Schumacher (me at least) is the fact that he always looked confident and as cool as some inert gas at absolute zero. The aura of confidence just used to inspire something in me. He defined F1 when he was there, as rules had to be changed at certain stages just to see less of dominance. That speaks in itself about his talent.

You can read the Wikipedia entry on him here, and then here’s a news entry on his retirement on Yahoo! News. However, for diehards, there’s some hope of him returning back to the circuit too…