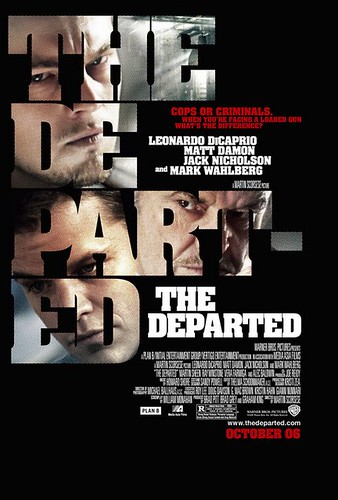 photo credit: plynoiThe Departed (read my review of The Departed here) truly is one of the best mob movies ever. Certainly not up to the pedestal where The Godfather is, because that’s unattainable. These movies stick on for generations because of the deep impact that they have because of their stellar acting, direction, script and cinematography. Take away any of these pillars, and the movie crumbles to sawdust. The reason why I’m writing this is because HBO recently showed The Departed on television, and having seen it twice in theater earlier I thought of seeing it again now. True to HBO’s style, they publicized it as ‘Premiering for the first time on Indian television’. They really need a bloody dictionary to understand that ‘premiering’ MEANS ‘for the first time’.

Anyway, what HBO did was that it cut out scenes from the movie, and made it awfully boring. Not a SINGLE expletive remained! Not a single f-word, when the opening lines of the movie itself would have somewhere around half-a-dozen f-words. And I don’t mean ‘fountain’ or ‘Fenchurch’. Unlike normally, they just didn’t silence or beep out those portions, they actually snipped them out. The end result was that what they were showing could very well have been a fucking Disney movie. Sadly, it’s Jack Nicholson’s character Frank Costello that suffers the most because of all this editing because his menace doesn’t come across that well. You don’t get the idea that he’s a dangerous mob boss until you see the actual version where he, er, shall we say, threatens to harm Matt Damon’s fiance. Then there’s the scene where Costello meets Damon’s character in a porn theater, and says “I own the place”. You don’t get to SEE what the place is in the ‘HBO-version’. They could have been meeting at PVR, for all we know!

Absolutely THE worst editing is done where they’ve cut out that AMAZING scene in the movie where Pink Floyd’s Comfortably Numb is playing. THAT was SO amazing, and they censored it out. With that scene gone, the suspense at the end about whose child Vega Farmiga’s character is carrying is also not there.

Take any of the shooting sequences too. All of them had over-the-top gore, with loads of blood splatter on the walls. In the version HBO showed, we hardly even get to see the bullet hit a guy when the scene is cut short.

Frankly, HBO should either show a movie without edits, or not show it at all. Someone who hadn’t seen the original might end up wrongly thinking that this was a boring movie, when it isn’t. Heaven knows which other movies have suffered the same fate and been written off by Indian audiences because of THEIR fault. It’s Martin Scorcese at his best, and we didn’t get to see it. A mob movie seriously doesn’t hold good if it has no expletives.

Watching it was a fun experience, though the suspense of watching it the first time wasn’t there. I particularly found Mark Walhberg’s character funny when I saw it again, his performance probably being one of the most underrated in that movie. I leave with this scene from The Departed, which is one of the best from the movie.

0 replies on “Murdering The Departed”

huh!? did i miss something here…must’ve been bored to death by the movie or something, because i really don’t recall there being any dispute abt who’s child vega’s carrying. and no, i didn’t watch the HBO version, i saw the indian dvd version…

@Rach: That’s because you didn’t see the ‘Comfortably Numb’ scene, which, ahem, was the one which would have raised doubts about whose child it was. BTW, just curious, is the Indian DVD version rated UA or A? That’d explain a lot…

A ofcourse! the rating on the dvd is always the same as the rating given by the censor board at the time of theatrical release.
nyway, i think i must’ve fallen asleep during the ‘comfortably numb’ scene…i mean, this is one helluva BAD film!

@Rach: Only you can fall asleep in a movie as engrossing as The Departed. :p