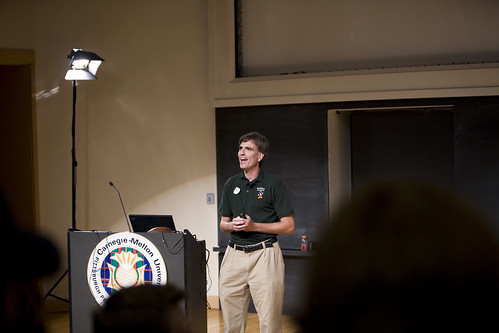 photo credit: wil pI dunno if you’ve heard of Professor Randy Pausch and his ‘The Last Lecture’ series appearances. Randy Pausch was a computer science professor at Carnegie Mellon University, and was widely regarded as an authority in the field of virtual reality. He was diagnosed with pancreatic cancer, and instead of giving up on life and feeling miserable, he decided to spread his message of reaching for your dreams among the people of this world. This is what the Last Lecture series was all about, and by Bob, it’s so touching. Unfortunately, the inevitable happened, and Professor Pausch died yesterday. May the departed rest in peace.

Barely a few months ago, WITH the knowledge that he’ll be dying soon, he had such a jovial mood during the lectures. You can view the videos of his lectures online, or download the transcript of Randy Pausch’s The Last Lecture; and you should. It’s THAT inspiring. His official site is this one.

Watch the video of the Last Lecture. Don’t miss this one folks!