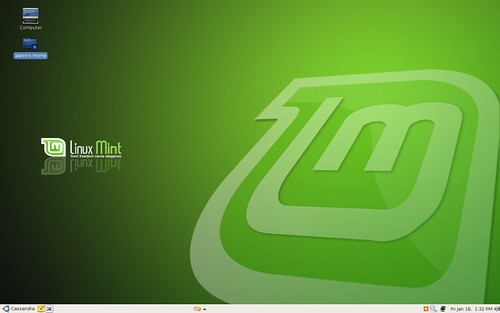 photo credit: Aaron Bassett. Not MY desktop.
I hate Ubuntu Hardy Heron 8.04, so much so that I’m putting up with Vista. Recently, I got my hands on the 8.04.1 maintenance release ISO via the PC Quest subscription I won at Dynamix last year. Apparently, it’s supposed to have fixed a lot of bugs. I installed it, saw that none of the things I was pissed about were fixed, and promptly uninstalled it. Then, I got my hands on Linux Mint release 5 (codenamed ‘Elyssa’; it’s based on Hardy Heron, BTW) ISO through a friend of mine who subscribes to PC World – and installed that. I’ve installed Mint on school computers earlier too, and I liked its overall feel and openSuse GNOME menu rip-off. Agreed, it didn’t solve the accessibility features problem, but it’s more stable than Hardy – which is all I wanted. Plus it comes with much better artwork than Ubuntu’s various-shades-of-shit-colour wallpapers (I really wonder if people who call that shade of brown have gone bonkers). Elegance truly came from Freedom.

Apparently, Dynamix Fest at Ramjas RKP had no sponsors this time, unlike last year….So no Magazine Subscriptions for the winners 😉
Also, Ubuntu Hardy Heron was the first time ever I used a Linux Distro, though it was good…It has got so many loopholes…Just becoz they concentrated on Wubi!!

@Prateek: No sponsors? Even refreshments must have been bad this year then, if school was paying from it’s own pocket. It’s sad that your first experience of Linux was with a distro version that was so buggy. Hopefully these problems would be ironed out by the 8.10 release.

The refreshments were bad, as expected. And they were boasting that – “It has been handled totally by students”. I suppose Dynamix 2008 was one fest to forget – Bad organisation, Rigged events, Funny/weird qns, No sponsors – They did not even give Prizes to the second position. They just announced their names.
Yes, I am eagerly awaiting the 8.10 Release.

@Prateek: Code Wars. Now THAT’s what ‘handled by students’ should be like. 😉 Another nice Linux distro to watch out for would be openSuse 11.1 in December. Really good-looking distro.