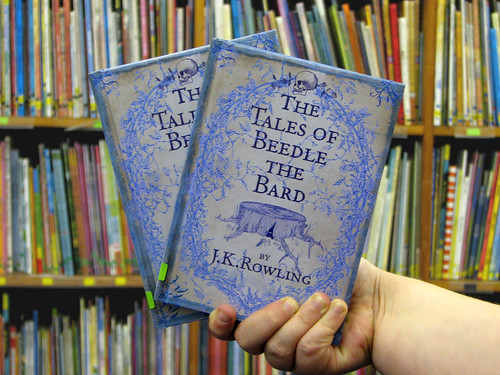 by J K Rowling. At 65 112 pages, it makes for an astonishingly quick read – but it also means that you don’t get to see many illustrations which are available in the deluxe / handmade editions of the book. I won’t give a background on what the book is about because I expect people to know about it if they’re acquainted with Harry Potter lore, but you can read up about it on Wikipedia in case you need a primer.

The four fairy tales (for the lack of a better word) themselves aren’t anything spectacular by any means. After all, the original intent of the stories in the Harry Potter universe is intended as bedtime stories for kids. The interesting bits of this book lie in the commentary after each story (under the name of) Albus Dumbledore. These are the bits where you can come across some wry humor, and get to know more details on the history of the wizarding world of Harry Potter. (As as aside, the footnotes also keep on egging the reader to buy read Fantastic Beasts and Where To Find Them; I found that excessively crass.)

Out of the commentary on the stories, the one on The Tale of Three Brothers is worth noting. In harry Potter and the Deathly Hallows, it is implied that Dumbledore left a copy of Beedle’s tales in his will to Hermione as a clue to the ‘tasks’ they should be doing. And indeed, the three artefacts of Death turn out to be actually existing ones. In the commentary of the J K Rowling book however, Dumbledore vigorously denies the existence of these – going as far as to mock wizards who look for them. As pointed out in the preface, Dumbledore was letting on less than he actually knew about the items.

Bottomline: An incredibly quick read (expect to wrap it up in 20-30 minutes or less) with a few non-crucial tidbits on the Harry Potter universe. Buy it only if you’re an absolute fanatic (or do what I did). It’s like those movies which you watch only on cable TV – you won’t splurge to watch it in a theatre, but would happily spend time with it in case you get it for free (borrowed / library / You Know The Othe Option).

24 replies on “‘Tales of Beedle the Bard’ book review”

hey ppl anyone know abt. the limca book of records quiz on 22nd dec, monday…. plz. post details on it, and how to register for it
i guess its taking place in dps rk puram this time

@Chirag: It is taking place at DPS RKP (generally does). But first, an intra-school is supposed to be held and then you get to go for it.

Chirag: Yeah it’s in DPS RKP. Hasn’t an intra-school version already taken place? It has in our school.
Asked us to identify the Taj Mahal and Bhel Puri. Or something.

@Chirag: The school is supposed to send in the names of people who’d be going. I suggest you have a word with the Delhi office of Derek O’Brien and Associates to clarify things. Contact information is available at derek.co.in (Even Derek’s fallen on hard time. Earlier they used to have an ‘actual’ office in Delhi; now they run out of a rented apartment.)

@Espera: I got to know that the intra-school rounds were dumb everywhere. Basically just to give publicity to Coke, that’s it – and maybe fulfill some contractual obligation Derek O’Brien and Associates has with Coke.

Derek was in Delhi recently for the NTPC Quiz, so you can probably expect him to do the quiz rather than one of his minions.

@espera and ankur : an intra school did take place, but no one has registered for the inter school, so do we just turn up as though its an open event…

Chirag: Are you sure no one has? I mean, if the intra-school took place, it’d be natural for the inter-school registration to have been completed.

Ankur: Ah … so that intra-school is basically pointless? And that despite not getting full marks in that, we can go for the finals? And … can any number of kids go then?

@Espera: The school can send one team for the inter-school event. (That’s what I know.) Kinda late for taking it up with the school authorities, don’t you think?

Thanks a TON for giving the link for this book! I’m an avid Harry Potter fan, having read each book of hers at least 6 times (6 x 7 books = !). Only this and Fantastic Beasts remain.

@Aditya: I’d written 65 pages earlier based on the number of pages in the PDF, but Sahil (on Facebook) pointed out it’s actually 112 since the PDF version shows two pages in one on screen.