“All your participants are belong to us!”

Phew…I finally get down to writing my post on WordCamp India (#wci on Twitter). This was held on 21-22 February 2009 (the first day of WCI was clashing with the second day of freed.in) at the Adobe India office in Noida. WordCamp is conference similar to BarCamp (except for the ‘un’ bit) for WordPress users. The organizers hit jackpot by getting the founder of WordPress Matt Mullenweg himself to come for the event – along with top blogger Om Malik of GigaOm fame. We had free WiFi courtesy Adobe so a lot of us did live tweeting / live blogging there. (Signing on to that network was another story. We all had to read agree to a long EULA, sign up for a guest account on the Adobe network. All pretty cool, when you consider that their network was rock solid.) Guess what? Our collective effort made it the most discussed topic on Twitter throughout the world on both days! You can check out all tweets tagged #wci related to WordCamp India on Twitter. I’ve also uploaded photos from WordCamp India in my photo gallery here (mostly contributed by Prashanth), and you can see photos clicked by other people at WordCamp India here.

Reached the Adobe office somewhat late because I had trouble finding where it was. Once you know what it looks like it’s kinda hard to miss because of the funky color scheme the building has (see picture above). The souvenir we got turned out to be…pencils. Now that was a dampner. But they were also giving out WordPress tattoos, stickers and badges. I had one tattoo of Mozilla Firefox on one cheek (from MozillaCamp Delhi). At WordCamp, I got some WordPress tattoos, the other cheek was populated soon. 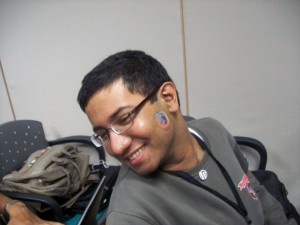 Some called me ‘cheeky’ (pun intended), but everyone did recognize me as ‘The Tattoo Guy’ – including Matt Mullenweg. I was also wearing multiple multi-coloured badges. You see, when these goodies are distributed people jump on them as if they’re hungry refugees getting aid from the World Food Programme – as evidenced by how greedily they were ‘attacking’ the box where the badges etc to be distributed. Yet, not a single person apart from me bothered to actually wear these. (Even for that matter, nobody other than me used the stickers given at MozillaCamp Delhi.) Love it? Flaunt it! When you’re a user of an open source project it is your duty to be an evangelist. There is no corporation full of moneybags to sponsor any publicity. YOU, as a user of open source software, have to contribute in any way you can.

(This is the same sick mentality as those who order multiple Ubuntu CDs via ShipIt – or forget multiple, even single CDs for that matter – and never bother to distribute / use them. Morons. A lot of money goes into that programme. The least you can do is have a conscience and not misuse it if you plan to sit on the CD like a hen for eternity.)

On Day 1 there were around 200 people who were attending – most of them bloggers. I found it surprising that hardly any developers were present. Sessions on Day 1 were:

Then came the time for photo-ops. The level of patience that Matt, Om, and other ‘star bloggers’ like Amit Agarwal showed was commendable. They obliged anyone who asked for autographs and / or photographs – usually, both. Wearing those Firefox and WordPress tattoos got me quite a lot of attention. While everyone else was asking Matt “Can I get a pic clicked with you?”, Matt was asking me “Can I get a pic clicked with you?”. [big grin] 😀 (I’d gone to ask him about what direction Automattic was taking BuddyPress and BBPress. He said that by the end of 2009 they’ll either stop development of BBPress or revamp it radically. BuddyPress is still in RC1 stage, of course.)

Day 2 got off to a lazy start with the turnout dropping significantly. Those who didn’t come on day 2 missed a lot though. Socializing (networking, if you may) was much more on day 2 because of the smaller set of people who turned up (but largely because people were getting bored waiting for the event to start).

Soon it was time for goodbyes. The event came to an end with a group photo, and lots of business card / Twitter handle exchanging. It was a real pleasure meeting up with so many bloggers all across India – even more to interact personally with Matt Mullenweg, the guy who started the software project which this blogs runs on (just like millions of other ones in the blogosphere). Amit Agarwal has uploaded a large group photo on Flickr in which practically everyone who was present on day 2 is there (the photo is tagged with names).

PS – I think…this is the longest post evah on my blog! BTW, thanks to Rohit Khurana for some of the pictures featuring me in them in this blog post. Most others are by Prashanth Kanduri.

Even thought I’m relative new to WP but still I luv it, i’d like to attend wordcamp next time around, meet Matt.
.Am i eligible, what do i need to do or have.

No eligibility requirements! Just turn up for the event, that’s it.

Hi there,
nice post. I was there for the second day as the first day I had spent 2 days at Freed.in Had hassles getting through to home though the 2nd evening though.

On wordcamp though, it was a great event. Especially I was awed by Mr. Duggal’s as he had the audience eating out of his hand. Also l8er saw him talking with some of the ‘aam junta’ and giving them advice on various strategies . All in all it was a good show.

Pavan Duggal’s sessions were definitely the high point of the event. 🙂

WoW.
This is one of your older post,but it was good to read and view.