Stumbled upon this excellent resource for tech quizzers called The Official Computer Bowl Trivia book through Paul Ford on Twitter. Bear in mind this was released in 1996 so some parts of it may be outdated. Can’t wait for the next Code Wars I conduct with questions inspired from here!

Back in 2009 when I was on a gap year, I had a conversation with two friends from the quizzing circuit: Rishav Dey and Prateek Vijayavargia. We all felt that, at the time, while there were many resources in the form of quizzing blogs run by university quiz clubs, there wasn’t much in the form of discussion going on. This was back when Orkut, and not Facebook, was popular in India so there wasn’t even a pervasive social forum where these discussions could be held. Through this brainstorming, primarily driven by Rishav, the idea of starting a quizzing forum came about and we decided to call it “gyaan.in“. I registered the domain name on 26th January 2009 (it felt symbolic making the purchase on Republic Day), put up a joke landing page proclaiming “Never tickle a sleeping quizmaster” and that was that.

But there was something about the idea that kept drawing us back to it. Behind-the-scenes, more people came on board as they found this idea fascinating too. A crucial role was played by Vishesh Kumar, who came up with the gyaan.in logo through a process of iteration. With the branding in place, it took many more months to bash out what gyaan.in would be about. This is what the team came up with when we launched gyaan.in on 20th July 2009:

Nothing Official About It At gyaan.in we intend to extend informal interactions between members. For too long in the quizzing circle people have considered each other in a mildly to overtly hostile manner. Informal interactions – members getting to know each other as real people – instead of simply ‘competitors to defeat’ should make a nicer quizzing world.

Don’t Be Evil An extension of point 1, at gyaan.in we intend to ensure that no sort of politicking kicks in. To maintain sanity (actually, to combat spam) we will have moderators on the forum but we do not intend to have any sort of ‘positions’. You – the user – have your say in matters and the community decides collectively on its future. What we will have, instead, are evangelists / moderators within the community to spread the word. If you’re interested in being more actively involved in organizational matters then please get in touch with us at contact [at] gyaan [dot] in.

Quizzing, But Not For Points We do not intend to have a league table to keep track of who’s getting how many questions right on the gyaan.in forum or events. Partly this is intended to ensure that members who arrive late to the scene aren’t disadvantaged by early adopters who have had a head-start in answering questions. The main reason, however, is that we don’t want it to become Yet Another Place To Look At Other People As Competitors.

IRL Once members get acquainted with each other on the Web, we would like to extend the interaction by holding ‘offline’ meets where you can get to converse with members IRL (‘in real life‘). Some of these meets could be where a small quiz is conducted, others could be simply informal meets.

Quality Content Providing regular, quality content quizzes, articles, news, archives. Giving you a platform where you can share such resources easily – with our dedicated team of gyaan.in moderators providing editorial support. Content would cover oft-ignored topics in quizzing circles too such as technology and contemporary music.

Promote Quizzing In Delhi, Especially In Schools Compared to other cities like Bangalore, Kolkata, Pune, Chennai, Mumbai etc Delhi is often considered to be ‘lagging behind’. While that isn’t entirely true, we do feel that a lot more can be done in encouraging schoolkids to take up quizzing. Our first focus would be to make significant progress on this front in Delhi.

The only equivalent around at the time for discussions were quizzing groups on Yahoo! Groups, many of which are still around (but perhaps not that visited – I haven’t checked for a while). Anyway, the point being that Yahoo! Groups was a clunky forum software, and the communities involved more often than not had a competitive bent to them. The gyaan.in team wanted to avoid that: the idea was to have a “safe place” where quizzers could congregate online and share knowledge just for the fun of it, rather than for competitive reasons. There was palpable excitement in the air, driving even usually stoic Karmanya to claim a revolution had begun.

Although the idea was to be a forum for any kind of quizzing, perhaps because of the fact that most of the moderators on the website were my friends from high school who’d only recently left school or were still at school, the discussions tended to focus around school quizzes. Over time, gyaan.in became the de facto forum for any kind of school quizzing related discussion in India. I’m not exaggerating here. Take a look at the visitor charts (split over StatCounter and Google Analytics)…

Over its lifetime, gyaan.in had 0ver 100,000 unique visitors and over a one million pageviews from a community of just slightly over 1000 users. I’m not rounding out those figures for the sake of it, but that’s what it has actually worked out to! Since its very inception, gyaan.in’s community was highly engaged with more than a quarter of the community spending five minutes to more than an hour per day (at least 10% of the visitors) – stats any website would die for. So even though the number of registered users was tiny, the number of people who visited the forum was 100x larger and resulted in pageviews far out of proportion to the number of visitors we had. 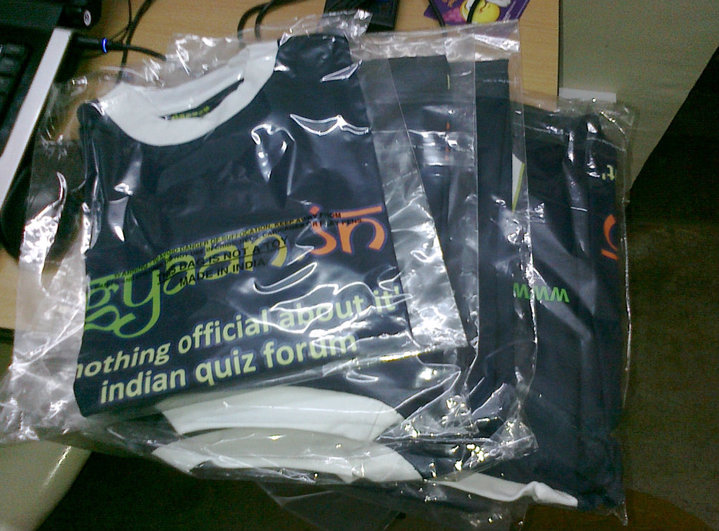 Over time, gyaan.in held its first (and till date, only) real-life quiz at IIT Delhi, multiple online quizzes conducted on Google Wave and Twitter, an email newsletter, an SMS update channel, official t-shirts, a Facebook fan page…and even an appearance in Antarctica. We never shied away from being available on multiple channels and engaging with the community to spread our name. The upshot was that from 2009 to 2012, any school quiz announcements or archives in India were almost always done on gyaan.in.

Sadly, the party didn’t go on forever. Starting in 2012, gyaan.in started losing traction as Facebook became more popular in India. Social graphs moved on to Facebook, and around the same time they started heavily promoting their groups feature on the website. A lot of quizzing societies and clubs now started their own fan pages and / or Facebook groups, thus giving another outlet for making event announcements, and conducting online quiz discussions.

My initial reaction was to try and jumpstart the community again through more outreach through moderators, but earlier this year I realised that the problem was that most of the moderators on the gyaan.in team had moved on to university – and didn’t have much time to look at the site. Indeed, even I had the same problem! Still, I was convinced by some the existing moderators to give it one last shot.

This was back in early 2013. I then mostly forgot to check on gyaan.in, until Pulkit pinged me and pointed out that it was overrun by spammers selling NFL jerseys and more unsavoury stuff. I took a decision then, along with the gyaan.in team, to finally put the website to a rest after cleaning it up. gyaan.in was officially shut down on 24th September, 2013.

The plan, going forward, is to keep the website alive in an archived state. New sign ups have been disabled and write permissions on discussions have been removed to ensure spammers don’t overrun the forum again.

Part of what set gyaan.in apart was the technology we used. I built the website that gyaan.in ran on, and since the beginning I felt that to really make it a pleasure to use it would need to feel unlike the “normal” forums built on phpBB. I went with a less-known option called Vanilla Forums, which had an email inbox feel to it in how the forum ran. It also had feature expansion made possible through the use of extensions. More importantly, a lot of the traffic was in spikes, especially close to events when discussions were heavily commented on with question archives from 100s of KBs to dozens of MBs being downloaded. At its peak, gyaan.in would consume around 50 GB of data transfer every month – made possible by GoDaddy’s generous hosting plan limits.

I haven’t been involved with the website design for a long time now and I know it looks quite bad now. We just ran out of capable administrators who had free time to spend developing on the website. Besides that, the Vanilla open source community died down quite a bit ever since they shifted focus to hosted Vanilla Forums. Extension lingered in stasis, updates took ages, and questions went unanswered on community forums. If I were to make the decision today on what forum software to use, I’d probably go for Discourse (from the makers of StackExchange).

In general, gyaan.in was also quite innovative in adopting various online mediums; the moderators on our team were quite tech-savvy. This allowed the team to not hesitate in trying out new ideas, such as shared calendars for events and quizzes conducted in real-time online on Google Wave. Technological innovation in the form of Facebook did ultimately lead to gyaan.in’s death, but at least for a while we were at the forefront.

None of gyaan.in’s journey would have been possible without the community that sprung up around it, participated in it, and contributed to it. And even more importantly, none of that would have been possible without the moderators who volunteered to be stewards of the community. On that note, I’d like to thank all these people below for making gyaan.in – the “nothing official about it” – Indian quizzing forum a reality…

On a more personal note, gyaan.in was my first taste of managing communities online. It’s especially hard to do when there are so many volunteers in different timezones with varied commitments which manage the community. I’ll be the first one to admit that beyond its first year, I went hands-off. Yet, what really touched me is how people stepped up to fill in the void left by old community moderators and took on the day-to-day running of the site. I’m still passionate about online communities, in particular working as a community moderator for StackExchange’s Travel question-and-answer website.

gyaan.in’s influence also helped me with 6by9media, an idea that started out as a joke (“What do you get when you multiply six by nine?”) but then evolved into a loose umbrella between me and some other gyaan.in members that went on to conduct city, regional, and national events in quizzing.

Two weeks ago, I went to a quiz at IIT Delhi. Many people I knew there were members of gyaan.in, and I think one of the biggest achievements of the community that we started was that people started to get know their “competitors” from other schools socially. For me, it brought the fun back into quizzing when I got to know and hang out with all of these people I’d only get to meet fleetingly, to actually find out who they were.

I don’t know about everyone else, but I certainly made some really good friends through gyaan.in. Here’s hoping the same spirit lives on through other venues.