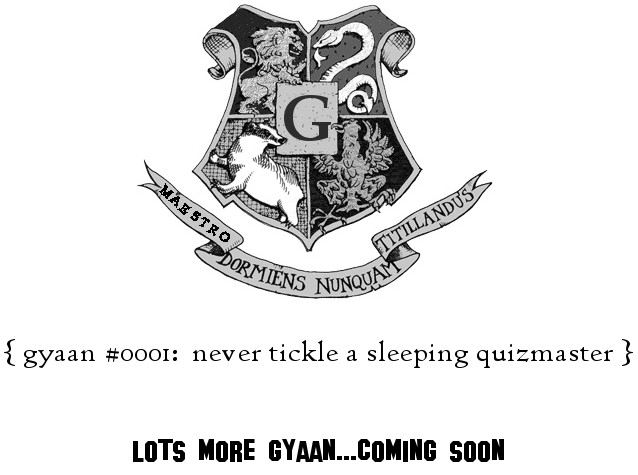 Coming soon…a forum for quizzers at Gyaan.in. To be accompanied by offline meets under the same group for encouraging and nurturing quizzing in Delhi. Expect this somewhere around the end of February. (Because I expect that by then the school exams would have finished, thus allowing more people to join this initiative.)

This has been something I’ve wanted to do for a long time – something related to quizzing – and I’m happy to see Rishav and Prateek spur me on to do this, along with Karmanya who I roped in later. Full details would be up later when the site is launched so I’ll keep it hush-hush right now. I was pleasantly surprised to find such a ‘premium’ domain name hadn’t been snapped by anyone yet!

About the placeholder pic: No, that’s not our actual logo. That will be revealed later at the launch. This is just a placeholder. Had a tough time finding out a usable logo. Why is that even after being such a best-selling book, there are hardly any high-resolution Hogwarts logos available?! (To clarify further: No, the actual logo has nothing to do with Hogwarts. Although it’s kinda poetic that there are four ‘founding members’ as of now for this initiative. I wanna be the snake-guy.)

I’m leaving town for a cousin’s wedding today. Will be offline for a few days. For the ones who’ve their school exams coming up, wish you luck!

Hey Ankur I would suggest that you should keep this thing at te end of march,i.e, beginning of the april so that even the board-giving students(like me and some others) can be roped in.
I hope you understand my point.

thats a great domain!
will be looking forward to receiving a lot of gyaan!!!
just like there was a delhi pan geek meet, are we having some sort of quizzers meet in the near future?

@Chirag We do plan offline meets for the group.

i wanna be the lion-guy….haha..

Hey when is it gonna get started??

Around the first / second week of March.