Hindustan Times writers continue with their sheep-like-astonishment-on-seeing-sunrise when it comes to computers. Honestly, this article was so lame that I had to mention it somehow even in this unrelated post. (I mention it because of that guy ranting about things getting digitized. That article is so nonsensical that I won’t even bother refuting it.) 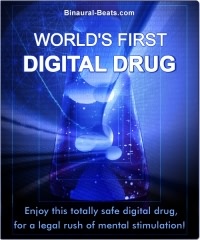 OK, so we know that things are getting digitized. Everything from paperbacks to laundry lists. A quirky attempt in a similar vein has been to create ‘digital drugs’. Conceptually, has been around for a long time in the form of binaural beats. From the Free Encyclopedia we all love…

Binaural beats or binaural tones are auditory processing artifacts, or apparent sounds, the perception of which arises in the brain independent of physical stimuli. The brain produces a phenomenon resulting in low-frequency pulsations in the loudness of a perceived sound when two tones at slightly different frequencies are presented separately, one to each of a subject’s ears, using stereo headphones.

That’s a prerequisite – a stereo headphone (standard speakers won’t be able to recreate the effect properly). Binaural beats can be quite relaxing – in fact, I had tried them out earlier. I was intrigued, then, to come across this news story on ‘digital drugs’ being created using binaural beats. (I know. I’ve delayed this post a month too many, haven’t I?)

Could it actually be true? Can a ‘simple’ digital thingamjig mashup of sounds get you as high as Towelie? As it turns out, it can’t; although I’m damn sure the creators have been able to increase their sales exponentially simply by making this overstatement. It doesn’t take you nowhere as close to as being high, but it does put you into a deep, relaxed sleep. Handy for taking a break during exam prep, methinks. And the way it works, the final few minutes snap you out of it. You can also find many other tracks using binaural beats which can actually help you relax.

I read that article…. O_o

information communication technology (ICT) using to eradicate corruption is not only far fetched but fundamentally flawed.

I hate New Delhi all of a sudden.

Ahem. Binaural beats, eh? where’d you get to hear some of it? I googled but it didn’t get me any good links.

Check out the Wikipedia link and the thingamajig link. Don’t rat me out as a ‘drug dealer’ though. (I’d have inserted a legal disclaimer here, but pardon me. I’m typing on a cellphone.)