After a short hiatus with me off to me cousin’s wedding in Kolkata, I’m back. We had this huge party of people from Delhi going over there and effectively behaving like NRIs about the “…pollution and dust in the city”. We had a few old people and all, so we went / came back by Rajdhani. On your right, you can see why I’m so paranoid. Life keeps on doing these weird things to me, when I don’t necessarily ask for it. I’m not making this up. The second number in the image from top (or bottom) shows my berth number.

Kolkata seems business as usual. People seem to be as lazy as they ever were with ‘places of interest’ always full of picnickers even on workdays. I mean, whole bloody families out for picnic on workdays. That, and the place is incredibly cheap – in both senses of the word. Another curious thing I noticed is that even though the commy bastards win over there all the time, the walls of houses are plastered with ‘vote for us’ messages from Congress / Trinamool Congress. Talk of delusions.

The wedding took in Chandernagore (now called Chandannagar), a small hick town to the north of Kolkata which was once the stronghold of French East India Company. (That should give you an idea of how lame-assed it is because of the lame-assed-ness of French among East India companies.) At some level the town municipal corporation’s attempts to attract tourists is ‘cute’. Like, the ‘Travel’ bit (about how to reach there) which talks of travelling by ferries as exciting water sports! There isn’t much to see there except for a museum on the French East India company where you can see:

Smart comments aside, the museum is worth seeing – even the school exhibition type posters made on chart paper that the displays use. Apart from French you’ll also find some stuff from older Indian civilizations. Too bad I couldn’t get pictures since photography wasn’t allowed there. You’ll also come across documents written by Gandhi in his own handwriting there. (Mine’s worse than the Great Man himself!) 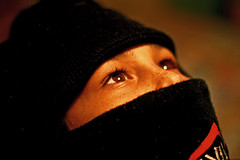 photo credit: carfWeather’s quite comfortable for Delhi folk, the kind of temperature you have in Delhi when it’s the beginning of autumn. Yet, you’ll find folk in Kolkata wrapped up in layers of woollens and ALL of them wearing (what they call) ‘monkey caps‘. If terrorists had an iota of intelligence they would have thought of doing something there since they’d be indistinguishable from general public. Then again, there’s nothing worth attacking in Kolkata. When one of my cousins (who was NOT getting married) went out for a jog in the morning wearing a T-shirt, people (through their ‘monkey cap’ slits) stared at him as if he was an alien.

Before coming back dad decided to buy some ‘authentic’ Bengali sweets from the Mother Land. (I suggested that we might as well just buy a few cardboard boxes and fill them with sweets in Delhi rather than lugging it all the way from Kolkata. I think dad was considering it before the stern look from mom.) We went to this sweet shop (which the driver claimed was the ‘biggest’ in town) and bought some stuff. Then, dad paid the shopkeeper with a Rs 500. Now, I’m not making up anything of what follows. The shopkeeper actually stared at the thing, turned it around and consulted with his workers in the shop. And gave it back, because they had never seen a Rs 500 note or heard of it! Ever. (I shudder to think what the poor guy’s state would have been if it was a Rs 1000 note.)

While on the way back to Chandernagore to Kolkata I laughed. Non-stop. For about an hour. I need help. That’s all for now, folks.

PS – I forgot to mention that I had a tough time there, being a vegetarian. I hardly got anything to eat at my cousin’s wedding because the only items on the menu were fish, fish, more fish and lobster. I eventually got UFOs (Unidentified Fried Objects) which the caterers claimed was paneer, but I had to attack those two knives to tear them to pieces. The only ‘good bit’ was that the food wasn’t spicy (I can’t handle spicy). The terrible bit was that over there they put excessive quantities of sugar in every goddamn thing right down from daal to curries. Along with (excessively sweet) puris, I somehow made it through these few days.

PJ after PJ in this post, huh? 😛
Anyway, what was so funny on the way back? Narrate that incident. If it requires audio, podcast it…
Anyway, I made a new post! See if you could survive through its length…

I have already commented on the post you put up on your blog. Oh, and welcome to Twitter! The incident(s) which made me laugh on the way back were numerous; not limited to, but including, the Rs 500 note incident. Moreover, because I was laughing, everyone else started laughing, and because they were laughing that made me continue laughing…and so on. At one point even the driver started laughing and our car almost swerved off a bridge.

The second picture is truly great. BTW, did FULL vacant seats refer to full or vacant?

It refers to both. I assume there must be something like ‘HALF vacant seats’ under which you’re only allowed to keep 50% of your butt on seat. (No, you aren’t allowed to switch to the other cheek if one goes numb.)

Haha, nice. I like the photographs. Who’s the kid?

The kid in the photo wearing a ‘monkey cap’? I dunno, I just took it from Flickr. I use this plugin called Photodropper which allows me to look up Creative Commons licensed images on Flickr for content related to my blog posts. The photo and the guy who took it are automatically linked to under the image.
About the Rs 100 coin, no I haven’t seen one in person, but I’m quite aware of the fact that the Nashik mint produces a few of these limited edition collectors’ coins. Rs 100, and a few other denominations. But a Rs 100 coin is a limited edition item! A Rs 500 note isn’t. Although given the fact that in Kolkata they still use 10 paise coins, this is not that surprising.

10 paise coins?
You’re kidding me, right? We send away the stray 25 and 50 paise coins to Kol, but 10?
Yeah, you get the whole range of 25 to 200 paise/rupee ones in those sets. My Dad has one of them. Don’t remember who it is commemorating, though.

I think 10p coins are still used on Kolkata trams, aren’t they?

Leaving that aside for a moment, “We send away the stray 25 and 50 paise coins to Kol…”?! So you package all the ones you come across, and then mail it Kolkata at the cost of Rs 10+ on postage? LOL!

Ankur: Nope. Used to. And not mail them either way. When it was all declared unusable, and you had a whole pile of them, you just gave them to whoever was going to Kol.

Not quoting word by word, but in the movie Pi, it was said that the moment you become infected with a number, you see it everywhere, because you want to. And that’s where number theorists become numerologists, I’m sure you aren’t any of them right now.

Secondly, on your blog you do hold everything in a very low esteem, everything but yourself and your ways that is. Of course, your response to this would be that you can put up your thoughts on your blog. That is why it’s important that you understand that I am not pointing at your blog, but at your thoughts.

The world still runs, even though everyone is not like you (or maybe because of that very fact itself). I’m hopeful a talented mind as you could do with more respect to the world, or if you possess it, could show it.

All the very best.

Far from it, there are many things I hold in high esteem. I might sound like I’m disparaging something here, but that’s not my intention. I enjoyed my trip, thank you very much, but there were certain anecdotes which I felt were worth talking about. It turns out that those anecdotes may sound ‘offensive’ to some. I’m not here to write an ‘official report’ of my trip down to last mundane detail. I believe you’d think I should’ve given a ‘balanced’ view of things there, right? Well, guess what? People aren’t interested in reading “I brushed my teeth with such delightfully cold water in front of a white basin” or “The view near the river front was amazing” (it wasn’t). I fully appreciated both sides of the place there but I’m not writing a BBC news report that you “demand a broader view”.

The driver an 500 rs note story was like….OMG

There was a similar funny incident when I had gone to Kolkata for my CBQC shoot. The teams were staying at Astor. My dad had gone along too and was staying at a relative’s place because the hotel was completely booked for CBQC teams. The shoot was at Swabhumi. Transport from the teams was arranged by Derek o’Brien & Associates, but my dad obviously had to reach on his own. On the day of the shoot he woke up pretty late and then scrambled to reach there. He found an auto and told the guy he wanted to go to Swabhumi (I think it was a distance of 20 km or so). The auto driver said that it was going to cost an “enormous [‘bibhotsho’] amount of money” to convince him to take just one passenger. (Autos run on a sharing basis in Kolkata.) Dad agreed to pay whatever he wanted, and the driver named his price – “Rs 25”. The chap was shocked when dad agreed! The driver was so excited / happy / both that he drove at breakneck speed. (Dad reached the shoot location before the team bus did.)

Added a PS to the post a moment ago.