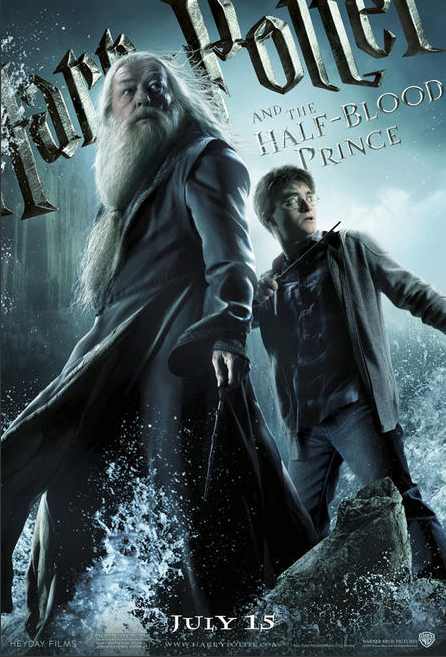 After being delayed for one whole year by fat cats in the top echelons of Warner Bros who wanted to rake in more money with a big summer blockbuster. What, in your opinion, is the best way to thank fans for the wait?

If you chose option 4, then congratulations! You’re on your way to becoming a much despised movie studio executive. Just because JK Rowling revealed Dumbledore was gay doesn’t mean you have to use that, you know.

David Yates who directed Harry Potter and the Order of the Phoenix (my review here) is back at the helm. Story-wise the fifth movie was the weakest in the franchise so far; watching Order of the Phoenix felt like watching cricket match highlights. Technical aspects were great – the cinematography especially was brilliant. Yates continues with same tradition with superb cinematography in the sixth movie, although not quite the same use of flybys all the time. Special effects are good too.

Half-Blood Prince truly shines through with its story / screenplay. Distilling down hundreds of pages of a book and bringing it alive on-screen is admittedly an uphill task. This movie is able to strike a fine balance between what should’ve been left and out and what shouldn’t. It is very true to the essence of the book even if at had to throw out some sub-plots / scenes. I would go as far to say that Peter Jackson’s Lord of the Rings trilogy – which is the pinnacle of faithful book-to-movie adaptations so far – Half-Blood Prince sets an example for what filmmakers should try to achieve when making adaptations. Steve Kloves (screenplay) and David Yates deserve a round of applause.

Once again, Darrell Alexander Nicholas Hooper disappoints with the musical score. Ever since he took over this part in the last movie, he has messed up the score. That guy has absolutely no frikkin’ idea what kind of music goes with what scene. He’ll happily plod down Super Mario-ish soundtrack for an intense battle-scene.

Daniel Radcliffe has finally taken some acting lessons. He’s still quite terrible, but less so compared to earlier editions. Harry becomes Neo in this movie as he is the ‘Chosen One’. Rupert Grint doesn’t get much to play in this movie – whatever time he does get is spent snogging. As usual Alan Rickman and Emma Watson (whose new hobby seems to be beating up people with books / papers) deliver the best performances out of all the cast members with realistic acting, with the surprise addition of Tom Felton to the list too this time. He’s been one of the better actors in the series and does a good job this time. I wonder how good the next movie installment (it is to be released in two parts) would be without Alan Rickman. Michael Gambon fulfills his role of a paedophile by taking keen interest in Potter’s love life. Just like the kiss with Cho Chang in the last movie, the scene in this one with Ginny Weasley and Potter seems very wooden and forced.

Watch the trailer for Harry Potter and the Half-Blood Prince

One thing that this movie sorely lacks is pace. While the adaptation is faithful to the essence of the book it is equally slowed paced as the LOTR movies. David Yates seems to have been inspired by LOTR in his direction style. Nobody will deny the movie is good, but at 2.5 hours run-time the movie drags its feet along in some scenes. Nevertheless, a good movie, a notch up from the old one; still not good enough to dethrone Alfonso Cuaron’s Harry Potter and the Prisoner of Azkaban as the best in the series so far.

PS – You know that this Harry Potter craze is going too far when tutorials on how muggles can play Quidditch start being made.

PPS – Don’t miss this video – Hitler reacts to the delay in launch of the Half-Blood Prince movie.

For someone who gave the movie an A- overall, you had a lot of negative things to say. While I agree with the grade, I disagree with just about everything else you said. And calling an advertisement “gay” brings a lot of negative connotation into play.

First, I found the acting to be stellar in all but a few scenes. The crying (done by both Tom as Draco and Dan as Harry) was not, to me, believable, and the Harry/Ginny kiss lacked something. Aside from that…

There was quite a bit of creative license taken as well. Scenes were added, scenes were cut, but I never noticed that I was sitting in that theater for 2.5 hours because it had me hooked. And that’s saying something as I absolutely loathed Order of the Phoenix. At least this time I understood why Yates left out what he did.

I will agree that Tom Felton was stunning. In this movie, Dan was correct in his statement that Harry Potter and the Half-Blood Prince was HIS movie. Truly, we felt the pain and torment of Draco Malfoy as we never have before.

I’m not certain who it was that decided you were a good choice for publicly reviewing this movie, but you have done it, and those in it, a great disservice with your grossly narrow-minded approach. I’m still pissed that you had the gall to call those posters “gay.” I don’t see it at all. Perhaps you have an issue with homosexuality that you should look into before spreading your bigoted ideas around?

As for the soundtrack, if Nicholas Hooper would have truly “happily [plodded]down [a] Super Mario-ish soundtrack for an intense battle-scene” then he would have done just that. Instead, he put a bit more thought and time into his music than you did in writing out your opinions.

Now that I’ve said most of piece, My last suggestion to you, though, is that perhaps you should sit through the movie again, this time removing your head from sphincter first.

Dunno much about Nicholas Hooper, but John Williams is GREAT.

I haven’t seen Half-Blood Prince yet, but honestly, I pretty much dislike all the movies, so I don’t really have much hope for this one. Although, the fact that (according to you), the movie is much slower-paced sound pretty good because if there’s one thing I disliked about the movies (there are many more, don’t worry 🙂 ) it’s that they move at breakneck speed.

Also, you LIKED Harry Potter and the Prisoner of Azkaban?! ZOMG.

Yes! Prisoner of Azkaban is the best out of the lot till now. The previous two Chris Columbus films stuck rigidly to the book’s ‘feel’, but Alfonso Cuaron gave a whole new look to the whole series – the one they have continued with to this day.

That might very well be true. I loathed Goblet of Fire. It was a mere action-flick. No expository dialogue, terrible acting job from Gambon (he shouts, shakes Harry, etc) and no coherent plot to talk of. Prisoner of Azkaban at least explained some parts.

I still like the first movie best. It was a bit rigid, but it was charismatic and enchanting. And Richard Harris was perfect as Dumbledore. Don’t know why WB picked Gambon in the first place… he’s ruined the movies for me.

Gambon was picked after Richard Harris died. Warner Bros had no choice.

I don’t understand how you gave the movie an A-!!! To me the movie sucked totally, by intermission I was irritated that I had to sit for an hour & a half more….I laughed when Dumbledore died instead of feeling sad…if this is how you make movies, then I am sorry am never gonna watch any! None of the actors can act!

I gave it this rating in the context of the movie. It’s a great book-to-movie adaptation in most aspects. If you aren’t particularly a fan of the franchise then you would find most fantasy-related movies boring.

I LOVE the books. But even in my opinion, the movies suck. That’s not to say I find fantasy-related movies boring, however.