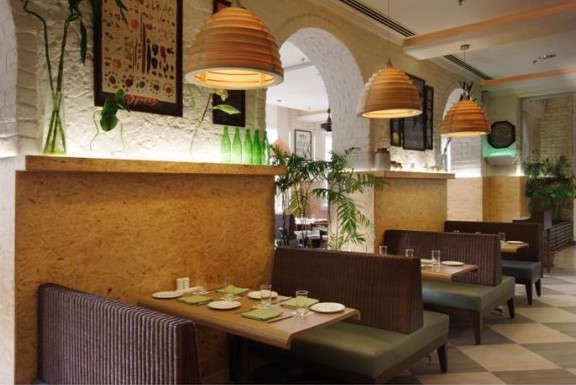 Potpourri is restaurant chain operated by the Nirula’s group, offering a fine finer dining experience than you get at the ol’ regular Nirula’s establishments. Potpourri, true to its name, offers a smorgasbord of offerings – Indian cuisine, Italian cuisine, Thai cuisine, Continental cuisine, and a miscellaneous International cuisine. Naturally, prices are higher – compared to normal Nirula’s restaurants but it’s worth it.

The CP branch of Potpourri is situated on the first floor of outer circle Connaught Place. When you’re going by that road it’s hard to miss its sign (and the floor which its occupying). Entrance is tucked away in corner leading to a narrow flight of stairs. 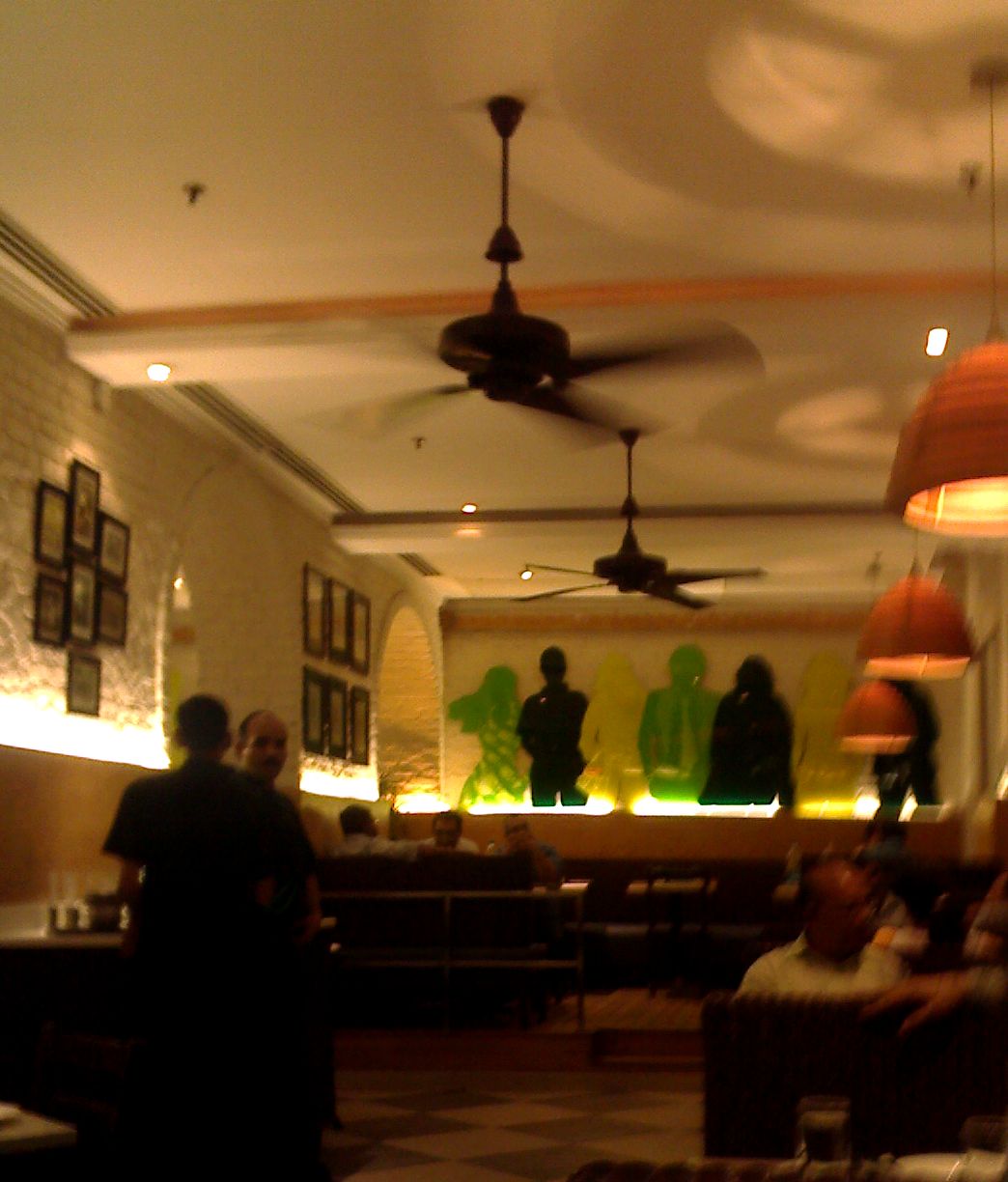 You generally wouldn’t need to make a reservation. On entering you’ll find the bar straight ahead with the seating area to the right. Interior is a curious mix of old school CP building and new school funky designs on the walls. Don’t let those ceiling fans in the picture fool you; won’t have to sweat it out, the joint is air-conditioned (obviously). But those old-school fans are a nice touch. 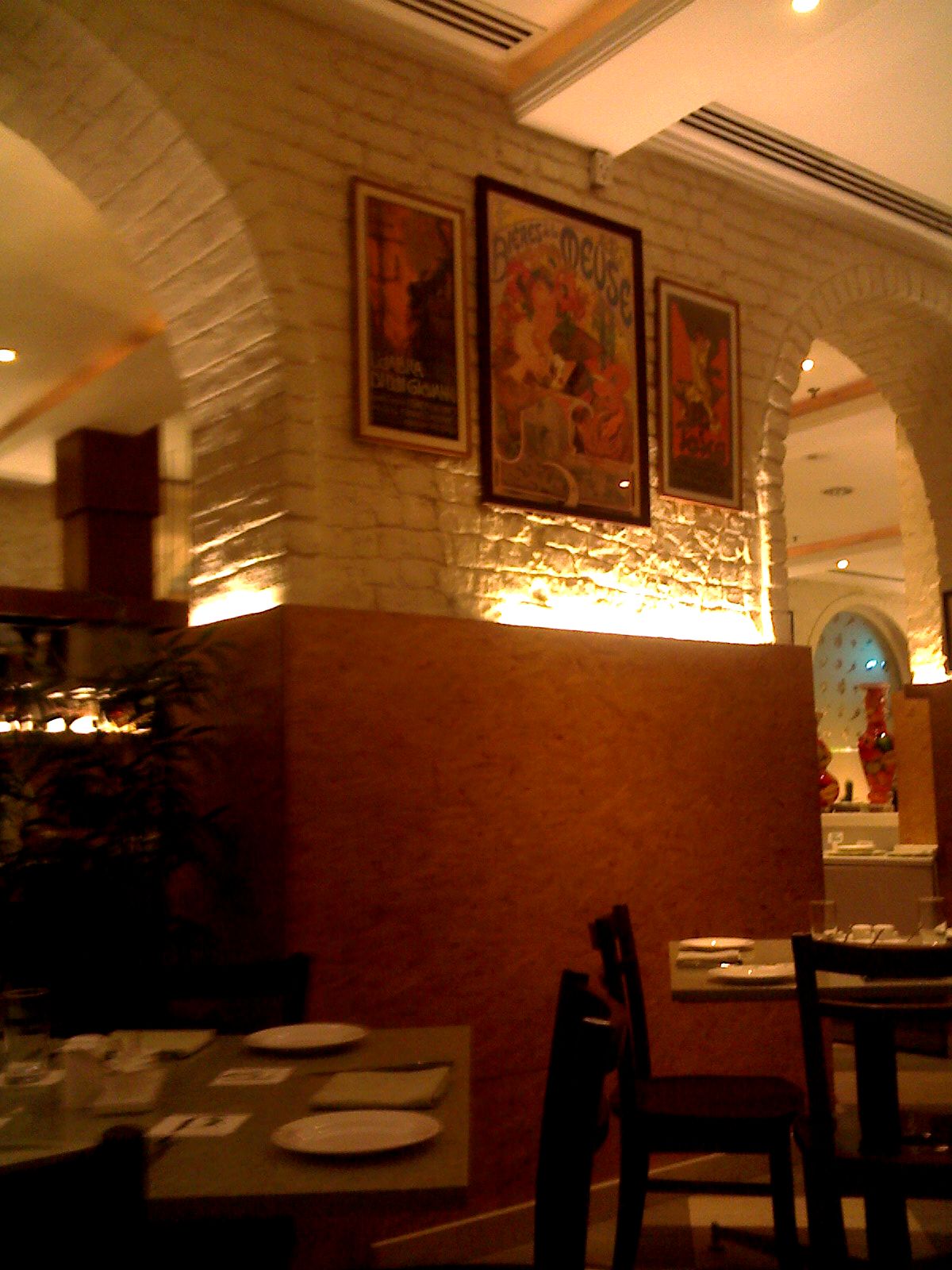 I didn’t really pay much attention to the paintings / pictures on the walls. Nothing really called much attention. Seating is primarily designed to accommodate groups of 4-6 people so in case this a family / team dinner it’s a great place. Hardly noisy at all, you won’t be disturbed by a constant din.

Menu at Potpourri is extensive. You can browse through the complete Nirula’s Potpourri menu online. Fans of Italian food might want to try out the ‘create your own pasta’ option at the live pasta station. Waiting staff is quite helpful in making choices. When our group ordered too much food than what we would need, the waiter pointed it out and helped us eliminate items we wouldn’t need. Food arrived within 10-15 minutes and they took care to see items were brought in more or less at the same time so that nobody felt left behind.

Ratatouille (with pasta) was a bit cold. That spoiled the taste. Even if the vegetable bit was good I couldn’t make it out because the pasta bit was bad. Verdict – avoid.

Chana masala was not spicy at all. I often have problem eating Indian food at restaurants because I can’t handle the tiniest bit of spiciness. For me this was great but most people would find it…weak I guess as it isn’t spicy. This bias towards milder spiciness is probably brought on by the fact that Potpourri is frequented by foreign tourists, so the food has been altered to suite and international palate. Verdict – up to you, depending on which side of the ‘spicy’ debate you’re on.

Navratan korma was heavenly! It’s a dish with nine vegetable mixed with lots of cashewnuts in a thick, sweet gravy. Best taken with chapati. Verdict – don’t miss this at any cost!

I ate a gourmet vegetable burger with mushrooms added as an extra. Coleslaw was provided separately on raw cabbage peels but that meant all the dressing fell away, making the buns soggy. Still, the burger was good. Mushrooms add quite a unique taste to the mix. Accompanying French fries were twisty and very crunchy – not the limp variety you find at McDonald’s. (No point comparing the two of course. They’re worlds apart.) Verdict – Buy, but I’m assuming most others would opt for chicken / lamb burger. Can’t comment on that, I’m a vegetarian. I also had peach iced tea.

Portions served are more than enough for one person – for all the dishes. Indeed, we were quite full and had no room left for dessert. Assuming that the same Nirula’s ice-cream served in their normal restaurants is given here, the premium you pay is for the ambience. Total bill for a group of three came out to be around Rs 1000. Then, you will get served.