My trip to The Pot Belly Cafe was mildly adventurous. Since I got a new Nokia Lumia phone, I decided to check out how accurate its HERE Transit app is with Delhi transport. I started off from my house near Moti Bagh and took a bus to AIIMS. At this point, the app kept telling me either to take a 465EXT route bus – which never arrived despite being listed multiple times – or to take route 540 from South Extension, 500 metres away. 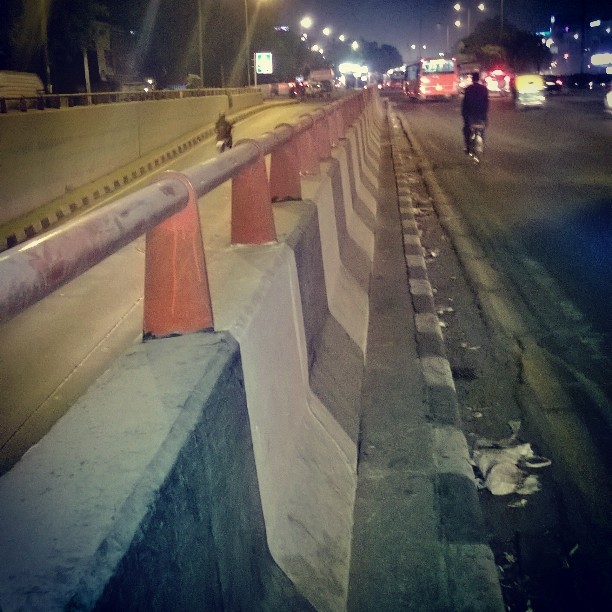 I thought, “500 metres ain’t too bad” so I started walking towards South Ex from AIIMS. At first there was a usable (in Delhi!) footpath, which soon narrowed down to a single-brick wide pathway alongside a busy highway. It was at this point that two guys on a motorcycle alighted next me. Now, it was dark – around 8pm – and I expected they’d either mug me or ask for directions. The mystery was soon resolved when one of the guys approached me and asked me whether I wanted to buy a Nokia Lumia 920 for “a reasonable price”. I politely declined and reached my destination eventually by bus. I learned later that it’s a common scam in Delhi to be approached by people pretending to sell you a phone at a seemingly bargain price, and then swap the phone with a dummy when the transaction takes place.

I was headed to Shahpur Jat – a “ghetto version of Hauz Khas Village”, as a friend described it. I was little prepared for the shock when I entered the “village” from the incorrect entrance and had to navigate narrow alley after another to get to my destination. (Directions on Zomato or Google Maps weren’t helpful.) Karmanya may have been scared to get shanked in HKV, but on this occasion I felt that was an actual possibility. The closest parallel I can draw to what the general vibe is when I’ve had to visit relatives in Katwaria Sarai.

Anyway, I finally did reach my destination, The Pot Belly Cafe. Not a particularly upscale option as it specialises in Bihari cuisine, which was part of the attraction to me since it would be something different. This place had been picked on Prateek‘s recommendation (a foodie who runs an amazing food blog over at Belly Centric); I was also meeting up with other Twitter-friends – Souvik, Apoorv, and Karan. 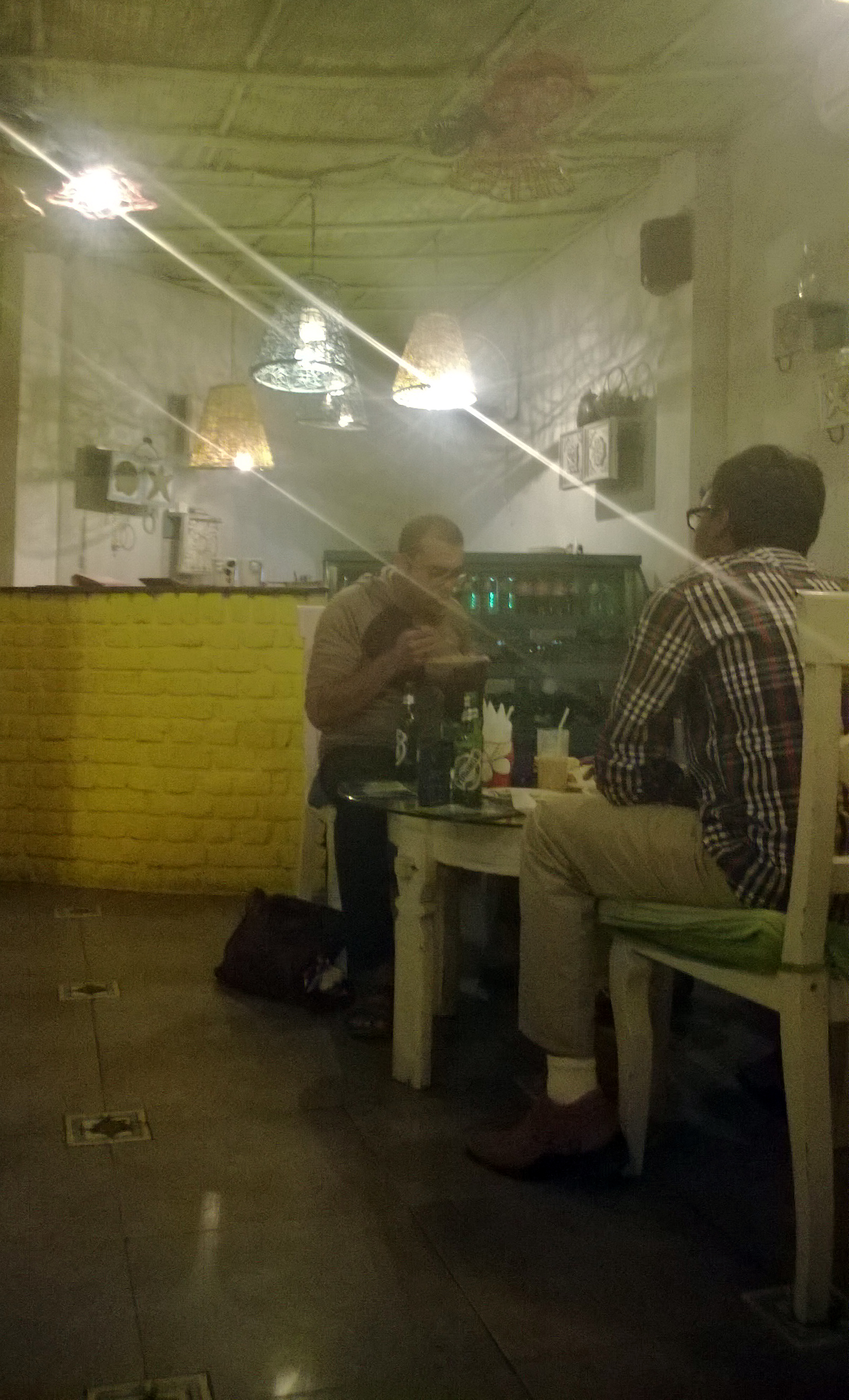 The interiors look like a fancy dhaba. We started off with baskets of meat and vegetable pakoras for starters. Pakoras are fairly typical and our group was still hungry so we decided to order more starters. 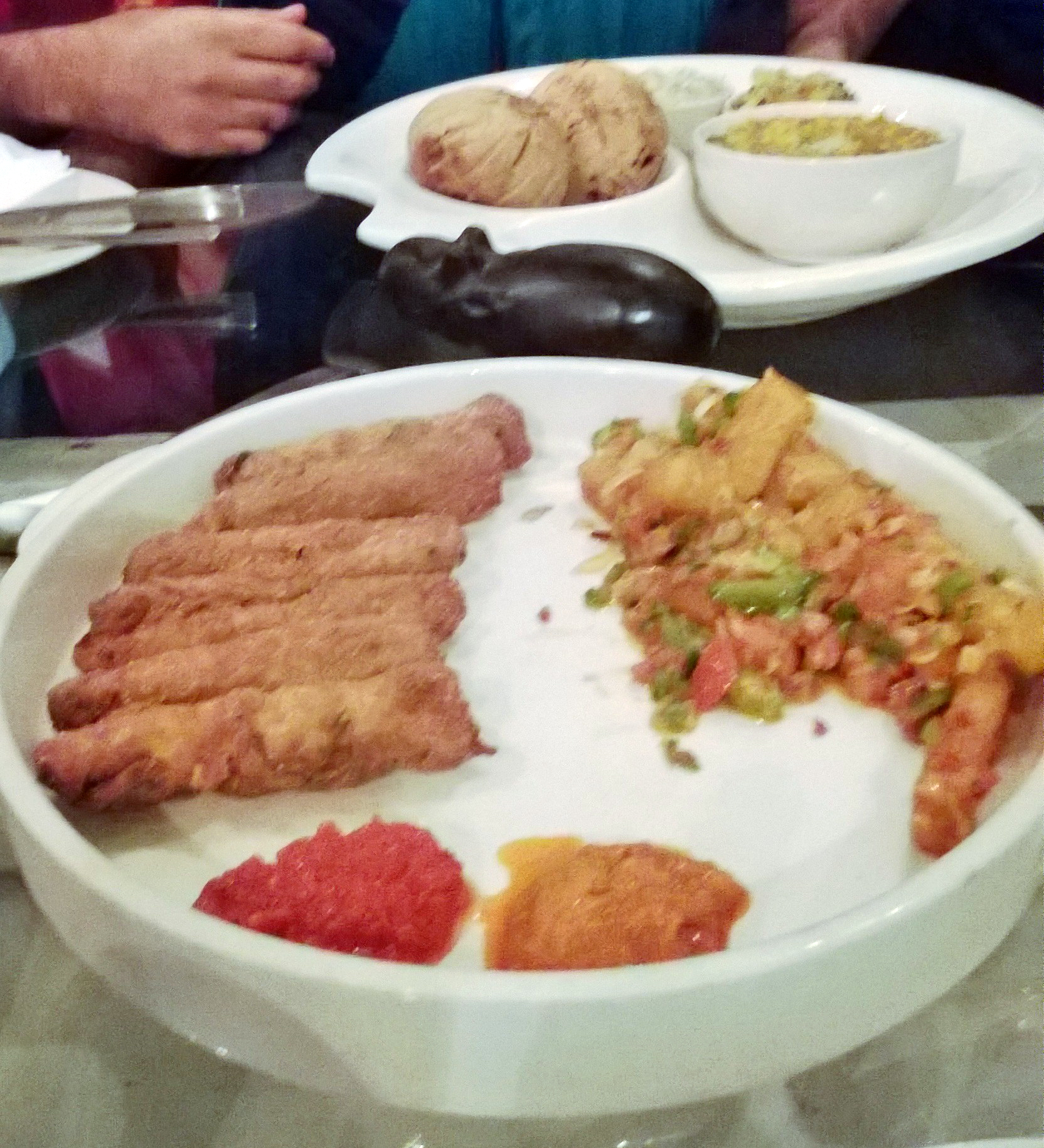 The next set of starters we ordered were “phish phingers” – cylindrical fish sticks with crispy potatoes of the kind you get at Yo! China – along with the Bihari staple of litti chokha. Litti is basically roasted chickpea which is stuffed into a fried jacket, like a jacket potato, served with (on this occasion) with chana dal. My impression of litti chokha from litti juices that I’ve drunk earlier wasn’t particularly amazing, so I was quite surprised that this was tasty!

For the main course, we chose three dishes. Bihari burger turned out to be a cross between a normal burger and a pav bhaaji, with a mutton patty and filling in super-sized pav bhaaji buns – enough for two people if you aren’t feeling peckish. Champaran-style mutton was boneless, tender mutton served with paranthas and raita. And lastly, Maithili thali was a puri dish with diced paneer. The portions were good enough for sharing among the five of us.

Somewhat out-of-the-way, The Pot Belly Cafe is an excellent choice if you want to try out Indian cuisine that’s typically not classified as “sexy” among eating-out choices or easily available. Make sure you figure out where it is first though! It’s very easy to miss. (Slice of Italy / The Coffee Garage are good landmarks in case you need to seek directions.)

SDA Market (opposite IIT Delhi) isn’t my usual choice for venue for a meal due to the lack of choice in cuisines. Not much space in such a tiny market anyway. However, I had noticed signs for a new establishment called What A Comic Show, and I was intrigued by it because I assumed it would be a comedy club. I wanted to give an Indian comedy club that supported local comedians a shot. 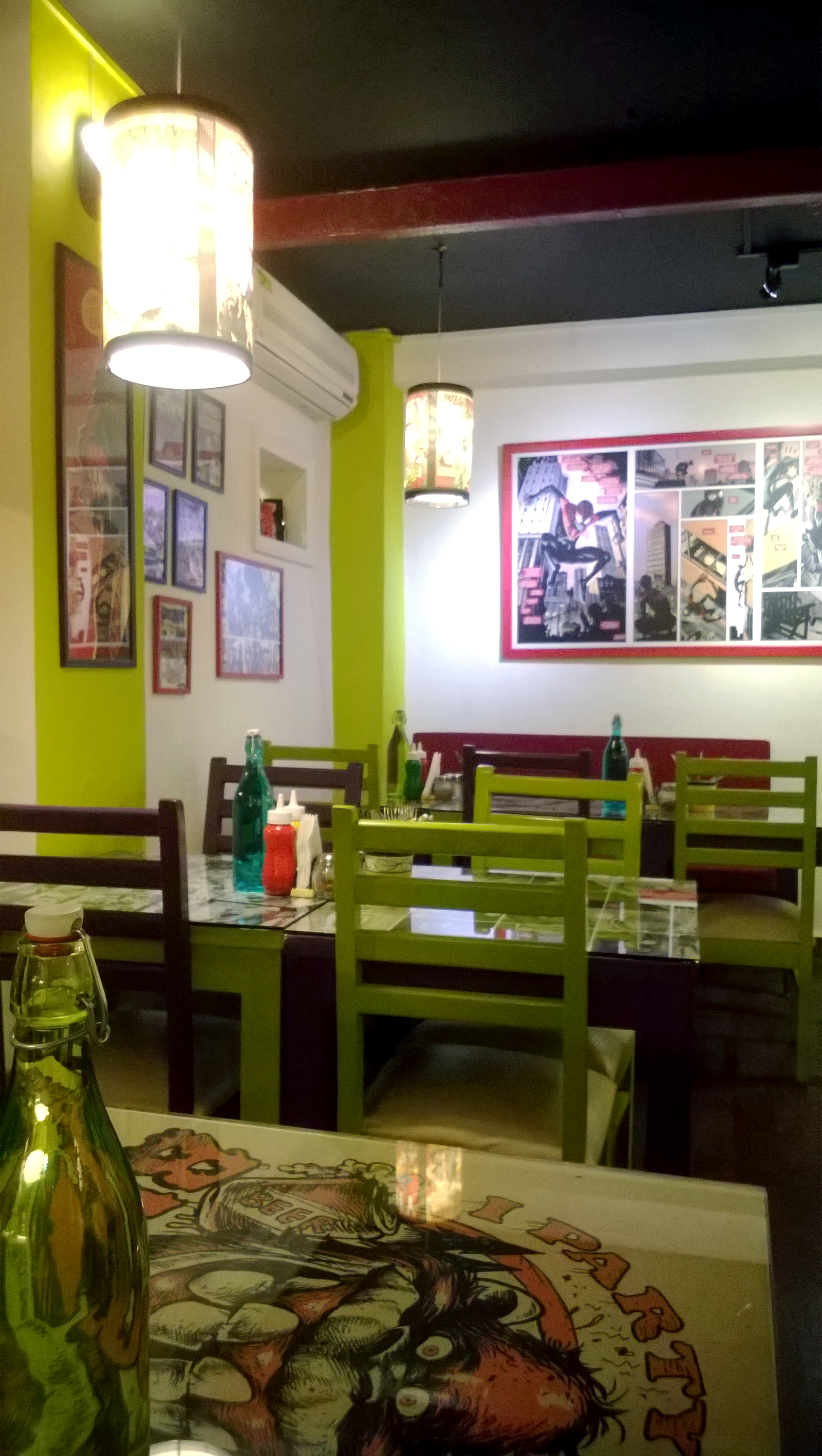 It wasn’t until I met up with Bhavika for dinner yesterday there that I realised that What A Comic Show is a restaurant – hence the name, rather than a comedy club. The restaurant is stocked with comic book memorabilia (with scary “no touching!” signs) on all shelves, with custom comic book graphic art poster for each table top. The menu, too, is a cardboard slab with comic book action font.

What A Comic Show primarily serves Asian and Continental cuisine. The Asian section, to be honest, is quite disappointing serving what passes off as Chinese cuisine in India. The Continental menu, on the other hand, is loaded with many interesting choices. We ordered the mix bell pepper bruschetta and mushroom toast for starters. The quantity was overkill for a starer, since each portion is quite large for two people with four pieces each. For mains, I ate their signature “All Flavour Burger” – a delicious combination of bacon, egg, and burger with fries.

The only hitch is that our first waiter seemed quite inexperienced, and didn’t understand either English or Hindi, consistently misunderstanding what we were trying to convey. Another waiter took over soon enough and he was charming and competent. It’s an important point because their menu doesn’t list what drinks they serve (no alcohol), so you’re completely reliant on the waiters to inform you about your choices. Another part of the decor – an ugly-ass stereo system near the cashiers’ desk – stuck out as slightly incongruous to me with the rest of the decor.

Prices are reasonably cheap and a meal for two can be easily had with starters, mains, and drinks for approximately Rs 900. (We did have to pay more as we underestimated and ordered more food.) With its prime location, pocket-friendly prices, and interesting take on a restaurant theme I can imagine this place would be popular among young people. 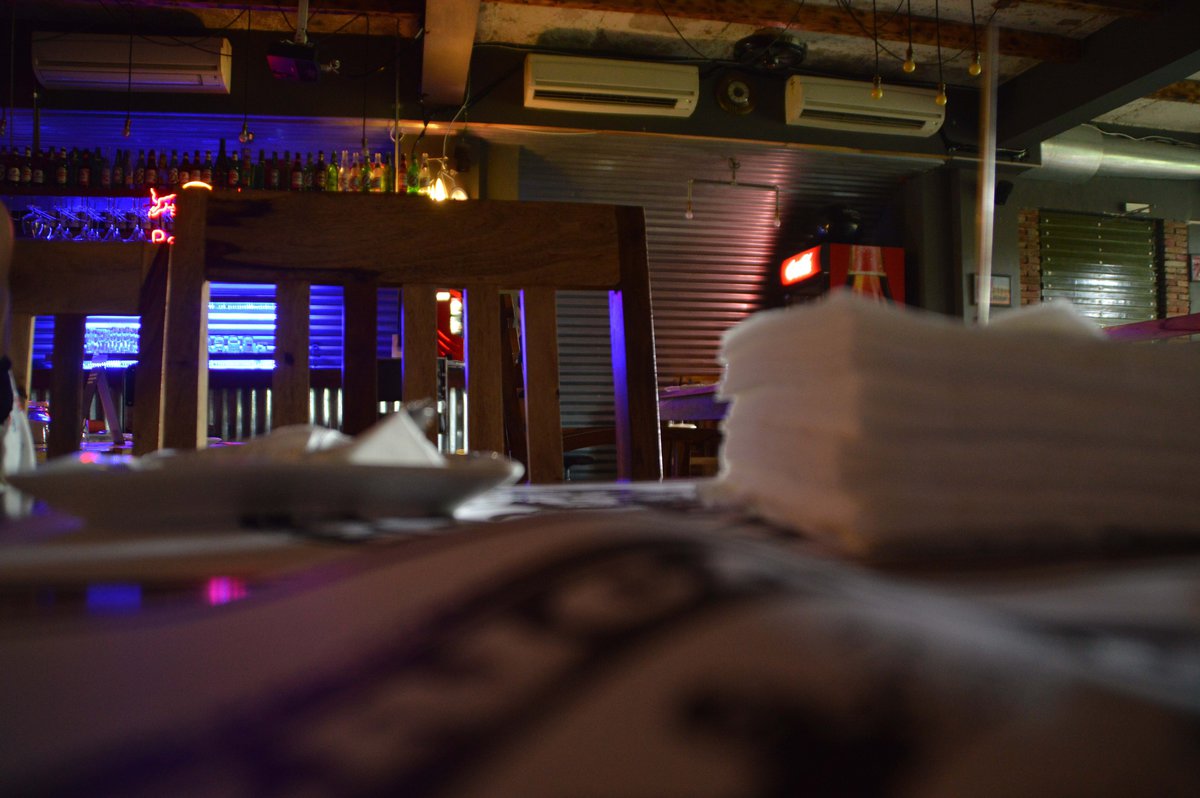 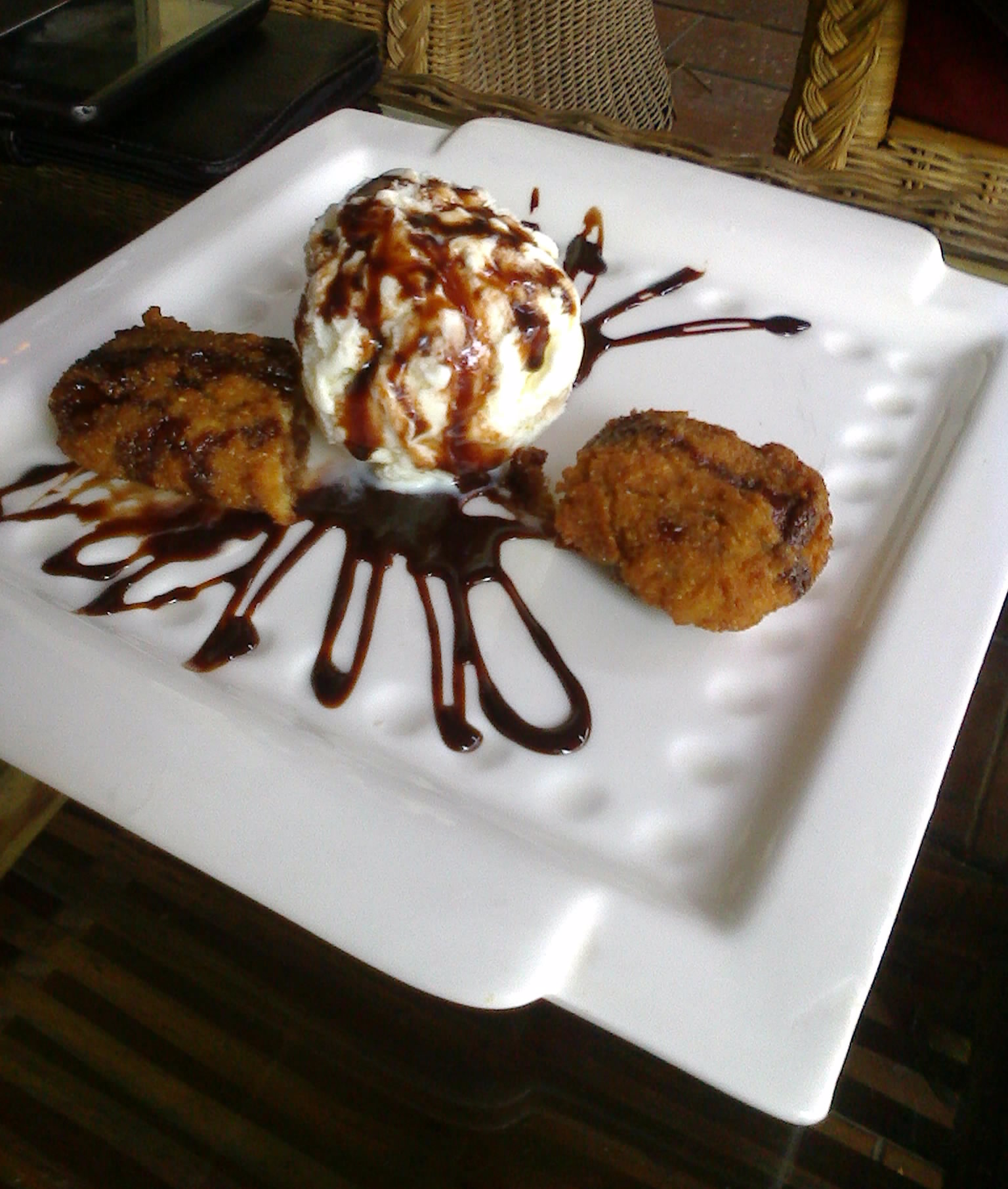 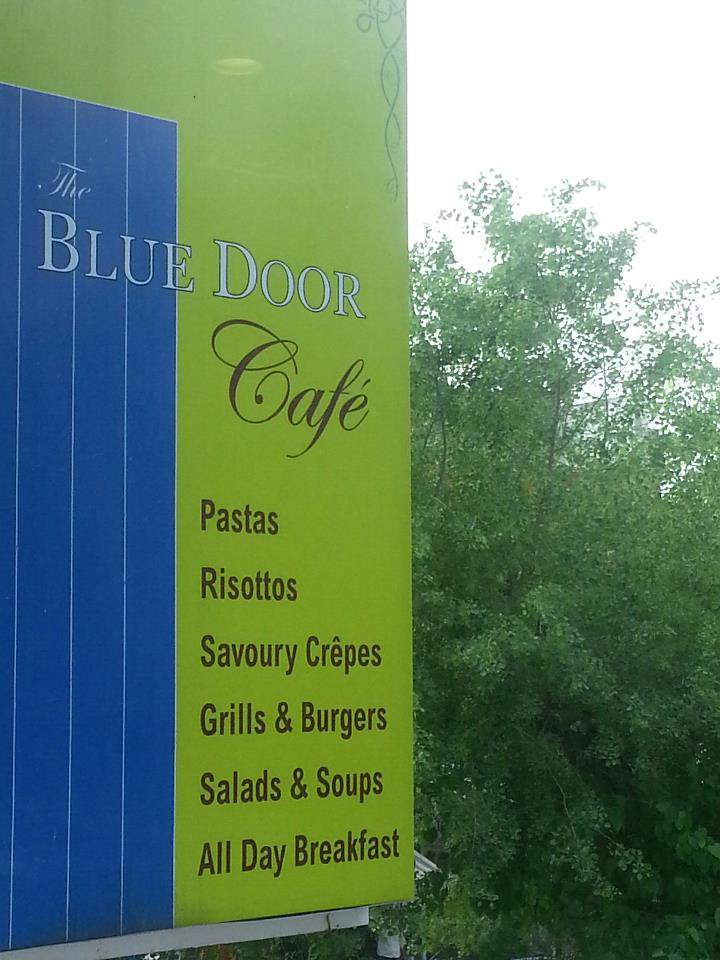