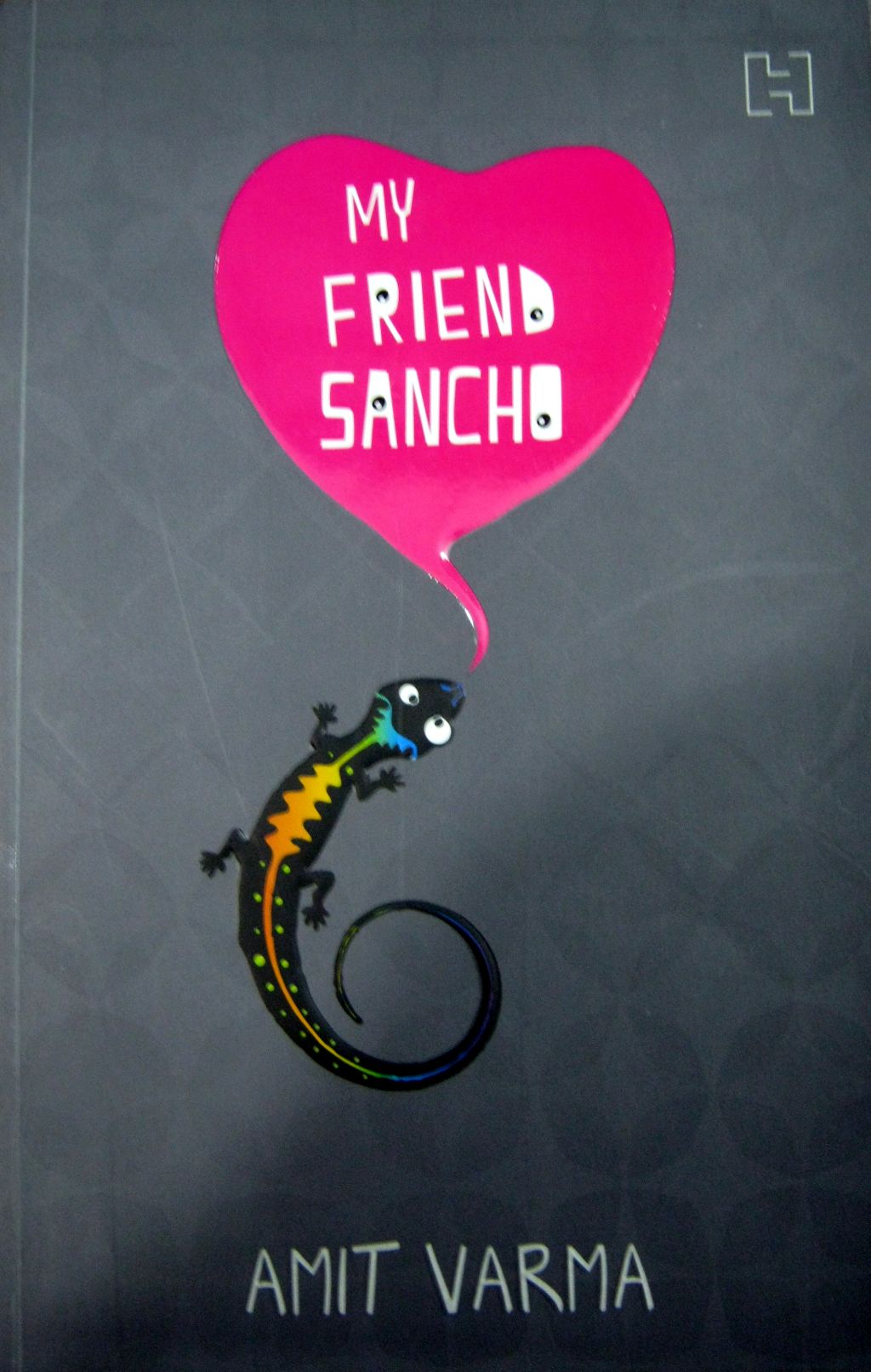 I ordered my copy if My Friend Sancho many moons ago (right when it was launched in fact) through Flipkart. Now, I had the time to read the book again. What struck me is how simple – yet beautiful and quirky – the cover design is. (Those adjectives describe the story too perfectly.) The artwork on the cover is embossed in the way it’s done on greeting cards, which is, I’m sure a first in design cover making. I think Hachette is new to India, which is why they are willing to experiment. (They’re also the Indian publishers for The Last Lecture by Randy Pausch.) Moving on to further minutiae, I love the typeface that the book is set in. Normally I don’t care about that but the particular font that was used in the book – Bodoni MT – is just so…pleasing to the eyes when reading. I generally prefer sans-serif fonts but printed stuff usually stick to serif fonts; Bodoni MT was a good choice in that regard. A little irreverent, just like the story you might say.

Okay, before everyone packs up and leaves let me really start with the review. Written by Amit Varma, ex-journalist and author of the wildly popular blog India Uncut, My Friend Sancho follows the life of a reporter in Mumbai named Abir Ganguly over the period of a few days as he witnesses a fake encounter – and is then asked by his newspaper’s editor to do a feature-length article on the lives of both the murdered man and the police officer who lead the time which raided that guy’s house. Unknown to most others, Abir was present outside the housing society when the incident happened (he had been called by the police to be there to cover the story once the arrest of some underworld gang members was over) which makes him somewhat uncomfortable about interviewing Muneeza, Mohammad Iqbal’s (the dead man’s) daughter, for the purposes of the story. Over that period, Abir falls in love with Muneeza (her nickname is Sancho, thus the title) and ends up losing it too. The love angle is definitely a major aspect in the story, but how Abir goes about dealing with two opposing views – one, of Inspector Vallabh Thombre that Iqbal was a gangster, and Muneeza’s that he was innocent. Falling in love with Muneeza, and yet understanding the rationale behind what happened from Thombre confuses Abir further.

The story in itself isn’t highly complex. You’ll breeze through within an hour or two this book. What still makes it a worthy read is deliciously witty humour – and genuinely witty at that and not just an exaggeration on the blurb. The character of Abir Ganguly has a penchant for fantasising and thinking up conversation snippets – on how or others are actually feeling about a situation – that are many in number and funny. In a way, My Friend Sancho is like a Quentin Tarantino movie. Tarantino movies often have not that complicated plots, but where they truly outshine everyone else is with the engaging, somewhat quirky dialogue.

I liked the fact that Amit Varma doesn’t stereotype anyone. Even when he seemingly does so in the beginning, he later moves on to focussing on what made the characters to become or behave in a particular way. The bit where Inspector Thombre speaks on why he became a police officer and what his job entails is particularly interesting. It even makes you sympathise with Inspector Thombre who ended up killing an innocent guy, and the fact that policemen, just like any other human being, can make mistakes too. In the ruse of writing a dual portrait story of both men, Varma leaves you thinking on how life isn’t all black and white. The character of Abir’s mom though is bang on target. 😀 Seriously, the first question that a Bong mom asks you in case she gets to know you’re going out with someone would be “Is she Bengali?”

Amit Varma also has a Tarantino-ish obsession with promoting his blog India Uncut (“Then I go to India Uncut, the only blog I read every day”) which I found extremely annoying the first time I read the book; by this second reading though, I chuckled at those bits and let it be. This book is definitely R-rated and not PG-13, so if you’re planning to gift this book to someone I suggest you to be careful. A quote from the back cover on the back cover itself should make this clear:

Comparisons with Chetan Bhagat are inevitable. My Friend Sancho isn’t a Vikram Seth, and yet it isn’t quite down to the level of Chetan Bhagat either. It’s an easy read, and yet I can’t help thinking at the same time that you definitely need to be an avid reader to appreciate the brand of humour Amit Varma brings to the table. This is not a book that will be enjoyed by Orkutards. At another level, Amit Varma and Chetan Bhagat focus on ‘different Indias’. Amit Varma’s India is that of the big city with shining malls, Cafe Coffee Day, tuna sandwiches at Subway and the like; Chetan Bhagat’s India is that of small town guys trying to make it big in Amit Varma’s India thanks to outlets such as IITs, call centres, businesses. This is quite evident in how the character of Muneeza, who perfectly fits in Bhagat’s India, is hardly seen from her own perspective and rather through the eyes of city rat Abir who cares only about the fact that he loves her.

And if you notice reviews for this book you’ll find that most of them are from what newspaper op-ed editors love to call ‘People Like Us’; most of the reviewers being bloggers who have been following India Uncut for a while now. Amit Varma mentioned in an interview that we wanted to take the middle ground between an Amitav Ghosh and a Chetan Bhagat book, but My Friend Sancho is firmly in territory that an Amitav Ghosh reader will bother to tread upon as ‘light reading’. Hachette’s pricing of the reflects this fact – at Rs 195 instead of Rs 95 they are clearly positioning this at a level above Rupa & Co’s pop-novel genre.

I don’t believe you need to be a reader of India Uncut to understand the novel, as some people have said. It might help you spot a few in-jokes otherwise that’s about it. As the novel is written in first-person from Abir’s perspective, the story is narrated according to how he perceives the world around him than what the world around him actually is; this might be difficult to comprehend based on how well-read you are. In case you’re ‘graduating’ from ‘reading’ Chetan Bhagat novels, well, reading a few posts on India Uncut won’t make you adept at noticing sarcasm. BTW, the character of the lizard (on the book cover too) which Amit Varma has hyped so much calling it a personification of himself is minor character that gets hardly any print space. In a sense, it is an in-joke somewhat like my ‘obsession’ with forty two, though it did remind me of the Unwaba from Samit Basu’s GameWorld trilogy.

My main criteria for whether I like a book or not boils down to one simple point – would I want to read the book again or not. My Friend Sancho makes that cut easily. Engaging dialogue, witty humour and many wisecracks, a few passages giving food for thought – all contribute to make this book a highly delightful read.

Download the first chapter of My Friend Sancho here (released as a sample chapter by Amit Varma) by clicking here. Also, he mentions an excellent essay by Thomas Nagel titled What Is It Like To Be A Bat, which is worth reading.

2 replies on “My ‘My Friend Sancho’ review”

Just finished reading the aforementioned book, and i must say, I don’t quite see myself subscribing, to a lot of arguments you laid out here. Humor tools lifted from American sitcoms ( “Boss fuck you” i cud have said that but i dint; Source: HIMYM), wafer thin storyline, filthy self promotion, funny to notice at the very last reference to his blog site the author resorts to actually giving out the full URL, Talk of not stereotyping anyone, what do you think about Ramona that party girl character which the author has etched out.

Except for the protagonist, no character has been rendered with flesh and bones. Do you think middle class Muslim girls leave their homes in a fit of rage and agree to stay over a stranger’s place, and her relatives not even let a squeak.

Talk of literary value : The reader can’t imagine the room Abir lived in, or how exactly Muneeza looked like, coz the pages never even make an effort to give form to your imagination.

Hyperbole (82 billion people on the railway platform)
Is that the way how we ought to use such handy figures of speech to decorate our prose with. Most of the places the usage seems amateurish.

And moreover I wasn’t too amused reading the small-dick talk..oops i mean Dick small-talk between the author and his wiener.

Hadn’t had much expectations of this book, but still what i expected, was at least some intelligent prose, given the pedigree of the author.

All in all a bummer.

The last thing I’d want in any book is Lord of the Rings style endless descriptions of the environment and people. The purpose of a book is not to create an accurate record, but to create a scaffolding on top which the reader’s imagination can fill in.