I know a guy a university who survived for one week with nothing other than a fridge shelf stacked with Stella, a bottle of ketchup, and approximately 167 grams of butter.

You don’t think I make up the shit that I say on my blog, do you?

After a brief hiatus (and a random blog post start) to visit relatives, I am back in New Delhi. I’d just sat down to do research for an intra-school quiz (at my alma mater) that was supposed to happen over the next three days when I received a phone call saying it has been cancelled due to “Independence Day celebrations“. Huh.

Those of you who follow me on Twitter would have caught some of my anecdotes when travelling by train to/fro my relatives’ pad. There’s a lot more to tell about that than can fit into 140 characters, so for the sake of completeness I’ll recount them here along with additional never-told-before bits (which you can read exclusively on this blog).

For starters, when you’re welcomed on-board the Rajdhani Express, you’re informed that…

If you want to find out the coast of food items, please contact the stoff of Rajdhani Express, they’ll give you a mean-u card.

I can confirm that coast is, indeed, extensive but you need not fret, since this additional coast is only if you want anything other than the complementary meals that you get. Which brings me to the…

…complementary meals that you get on Rajdhani Express. It’s no secret – as I have often insisted with everyone that I have ever met – that I’m a vegetarian and I can’t eat spicy food. Thus whenever I travel by train, I opt for the ‘continental’ meal option instead of the usual Indian vegetarian fare.

It’s an interesting meal, this ‘continental’ one. I don’t know which continent they’ve sourced the recipes from; gastronomic delights from the far-away lands of Europe they are certainly not. The most interesting dish they serve in this uncooked spaghetti in tomato ketchup with huge uncooked, slightly fried slabs of paneer except that instead of paneer they give a thick, damp piece of cardboard instead. You also get boiled peas mixed with carrot chunks and two untoasted slices of crumbling bread. Yummy…NOT! At least the ice cream is edible.

Having travelled by Rajdhani Express numerous times, it came as a mild shock to me when I found out on this trip that only trains from Delhi to other cities can get this name. The ‘Rajdhani’ in the title should have been a sufficient clue.

I’ve never been able to sleep on trains; the gentle rocking motion always keeps me awake. On longer train journeys that take a day or more always I have to figure out what to do for hours when everyone is lying in their beds and sleeping. I mostly read books on my laptop (bejaysus, they have power points on trains now) or play games on my cellphone. This gives me an opportunity to observe the mild insanity that goes on in trains at night.

Exhibit A: On my way back to Delhi, I was reading The Bourne Ultimatum when a visibly sloshed guy plopped down on Mom’s bunk below mine. When I slapped him on the back of his head and asked him WTF he thought he was doing, he got up, apologised, picked up a spare blanket lying on the table, woke the guy who was sleeping in a nearby bunk and offered the blanket to him, and on his generous offer being turned down wore somebody else’s slippers and walked off in a direction opposite to where his bunk was.

Exhibit B: Creepiest fucking little kid straight out of The Omen. Way past midnight, some kid starts strolling up and down the hallway and then after a while, stands in front of my bunk and just stands there staring at me for the better part of half an hour. 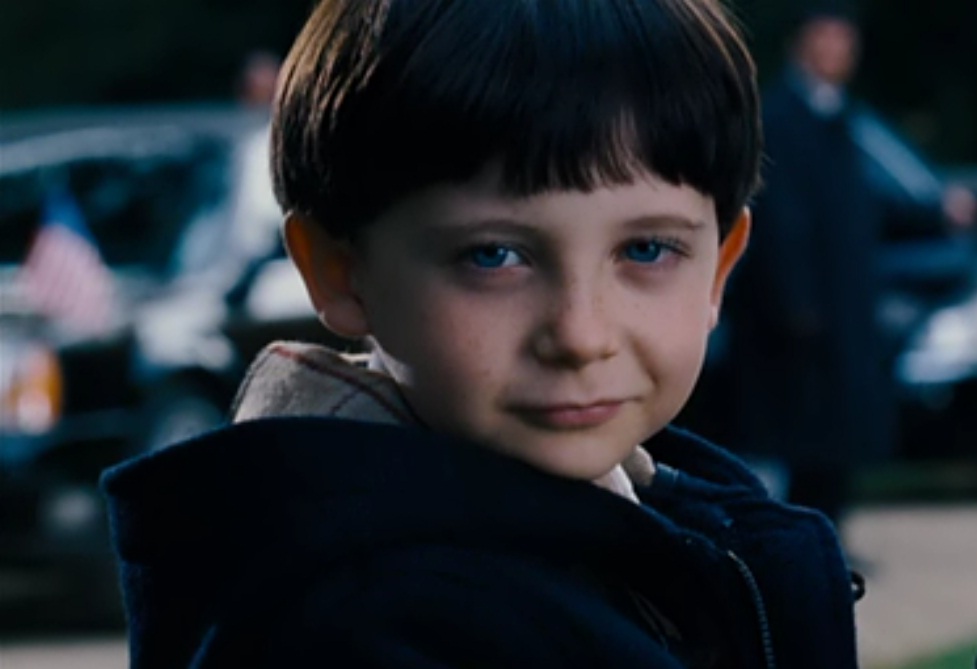 I was this close to freaking out and firing up Notepad++ to write out my will (I need to bequeath this blog to someone) when the Child of Satan turned and walked out of my life.

13 replies on “The Child of Satan, complementary meals, and alcohol-fuelled ‘blanket offers’”

The child of Satan 😀
Did you stare back at him?

At first, I was amused at seeing this kid awaking and scampering about late at night, but when he just stood there with a deadpan expression and glassy eyes staring at me…boy was that creepy. Eyes are doorways into the soul and I didn’t want the Child of Satan to possess me. I did not stare back at the Child of Satan observing that creepy kid out of the corner of my eye.

There’s no point comparing ‘food’ on low-cost carriers, but food service on normal airlines ain’t that great either. That’s a topic for another day though. 🙂 Until that day, you can read about the experiences of a certain talented gentleman named Mr Oliver Beale.

[sob] You find me almost getting killed by the Child of Satan funny. It must be because all those annoying text messages that I send you, isn’t it?

The food in Rajdhani’s sucks.Period.I had a 2 day trip in the Kerala Rajdhani and I swore to myself I would never ride that wretched vehicle ever again

Common aknar-that poor little kid might have been some gyaan fanboy of yours.:P

Dude, if that five-year-old (or so) kid was one of my gyaan.in fanboys, then that’s even creepier. Stalking me when I’m supposed to be sleeping. On a train. :s Think about that for a moment.

His love for you is apparent. 😛

I don’t mean ‘food’ on low-cost airlines, I’ve never been on them. I was referring to the ‘food’ that apparently Taj Caterers or some such company churns out for Indian Airlines.
Jet Airways’ is only slightly better though.

I read that complaint letter! Lol.
And even though I’m Indian, I couldn’t figure out what that guy had been served. Except maybe one was dhokla. And maybe the last bit was dahi. 😛

I think the ‘sponge shafts’ refer to paneer – nobody in their right mind would serve dhokla with tomato. White stuff to dunk the crime scene cookie in was probably dahi.

Bleh don’t get me started on Jet Airways. The only thing edible I’ve ever found on their flights is the custard. That’s it. Stella and custard is NOT a meal. Never had the misfortune to travel by AI/IA but my dad – who usually is compelled to fly with them – assures me I don’t want to find out how bad the food is.

I was traveling on the Kerela rajdhani a couple of Sundays back. Well, I’d say that continental non-veg is only a slight improvement on what you describe as the veg section. But when I saw the ice-cream, I flipped. Literally. It was Barista Lavazza. I know. I was shocked and surprised too.
Oh, and BTW, the train was over 12 hrs late to Udupi, my stop, owing to a landslide in the konkan railway, and the train being diverted inland, before coming back to the konkan route at Goa. The frustration was such, that a college junior, traveling in the same coach, actually broke to smithereens the glass on the compartment door like 5 minutes before reaching Udupi.
Such are people.

U bet… was as stunned as anyone… It was the fateful day of August 1, 2010, when Indian Railways served Barista Lavazza Vanilla delight on board Trivandum Rajdhani.