Most people of my generation would be aware of Bill Gates and why he is so popular – perhaps less so these days after he has stepped back from the limelight – only vaguely. He is that Scrooge-McDuck-ian level rich guy, isn’t he? Within the tech community there is a lot of hate for Bill Gates and Microsoft, especially among free/open source software supporters. You only have to peek in my archives to see I was cut of the same cloth.

Yet, it struck me that I hardly know anything about Gates as a person. From my tech quizzing days I know of what he wrote in his books The Road Ahead and Business @ The Speed of Thought – without ever having read the books; I know about his temper tantrum; stories about speeding violations and dates that went downhill. I have seen countless documentaries about him and the tech industry, not counting the ‘faction’ film Pirates of The Silicon Valley. 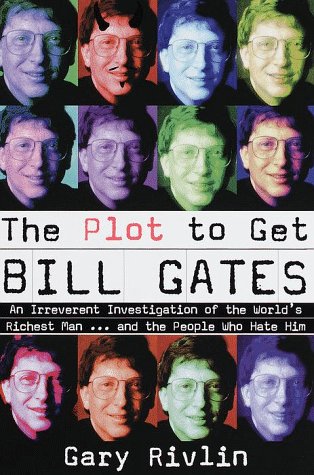 So when I came across an old copy of Gary Rivlin’s The Plot to Get Bill Gates: An Irreverent Investigation of the World’s Richest Man…and the People Who Hate Him at a book sale, I pounced upon the bargain. The book, published in 1999, is refreshingly free of the retrospective analysis post-dot-com-crash; celebrating The World as Brave and New. Rather than focussing on just a single individual as biographies do, Rivlin turns the spotlight instead on Bill Gates’ larger-than-life contemporaries Scott McNealy, Larry Ellison, and Steve Jobs too. What he excels in portraying is how these men and Gates fed off each other in obsessing “cutting off a competitor’s air supply” and making “supergreat” products.

Rivlin, for sure, is a technology-beat journalist who may not understand the intricacies of software development but to his credit – beyond the perfunctory introductions to any technical topic – he politely steps aside and lets people who do understand express their opinion. This approach might appear biased to you, depending on whose Kool-Aid you have drunk; ultimately though you have to admit that he does a good job of balancing stories from highly polarised camps. Those who demonize Bill Gates will cry out that this book borders on trying hard to restrain itself from fawning over him – but then I think it’s a carefully calculated result arising out how people envied and hated Gates (and still do). In that sense, the tone of the book mirrors reality a lot.

The amount of research put into the book clearly shows. I have heard many wildly unbelievable tales over the years – so has Gary Rivlin, of course, and he tackles this by chasing down the ‘original’ source of each apocryphal story, often with results that tend to indicate that they were manufactured. Again, Rivlin shows great restraint in hardly ever calling anyone a liar outright, preferring to let the reader draw his own conclusions based on the evidence presented.

Over the years, I personally have come to admire and respect him a lot more, moving away from Stallman-esque rhetoric. He is prominent philanthropist and whatever he may have done in the past, he is doing so much more for disadvantaged people in developing countries. I am saddened these days, thus, when I came across the same ad hominem attacks against him (again, especially in the FOSS community) that should have gone out of fashion a decade ago. The Plot to Get Bill Gates reveals the flaws in his character, but so does it also trace the journey of an incredibly intelligent person who matured over the ages. By comparing his contemporaries with him, it highlights how they probably wouldn’t have acted much differently, had they been in Gates’ position instead.

To the many people who know me from my school tech quizzing days: I highly recommend this as a read. You may no longer be actively involved in tech quizzing but I am sure you still cherish reading old trivia. Here’s a book that you guys will undoubtedly like. And – for the whipper-snappers still in the school tech quizzing circuit in Delhi – who knows whether reading the book will help you crack a crucial 10-pointer when you need it most at an event (hint hint Code Wars hint).