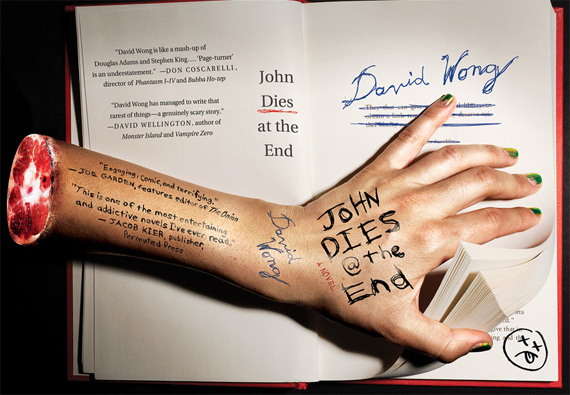 John Dies At The End by David “Dave” Wong (pseudonym for Cracked.com editor Jason Pargin) is a novel that one would expect to be the output of an author hallucinating on acid, yet still have enough coherence to write jokes. The story is a written as a first-person narrative set in Undisclosed, Midwest America from the perspective of Dave who is recounting incidents he has lived through to a skeptical journalist. He, along with his friend John, meet a Jamaican drug dealer Robert Marley (but of course) who gets them get them on a drug that goes by the name Soy Sauce which makes them hallucinate and gives them super-enhanced sensory perceptions – the ability to see ghosts, among other things.

The book is steeped in demonology and mythology, with a narrative arc loosely centred around an evil malevolent deity known as Korrok who is trying to open a portal from his dimension into our world. But wait! Before I loose you to thinking that this book is some kind of Lord of the Rings-style fantasy (and/or that I play Dungeons & Dragons in my basement) let me stop you right there: this book’s genre is best described as satirical horror. The tone of the story throughout is the kind of playfully satirical humour made so popular by Douglas Adams (think Dirk Gently rather than Hitchhiker‘s). Think Ghostbusters meets Sherlock Holmes meets The Sixth Sense meets Monty Python.

David Wong doesn’t shy away from gore either with very graphic descriptions, making the horror elements work. What I liked particularly about the style of writing is that he also describes sounds, textures, and smells (without getting too distracted by them that it gets in the way of the story) that make the narrative come alive. The characters are colourful too: “shadow people”, a seemingly immortal dog, the aforementioned “Robert” Marley, Detective “Morgan Freeman” Appleton, frequent appearances by Fred Durst of Limp Bizkit…among many others.

There aren’t many books in which you will get to read anything along the lines of ‘The phrase “sodomized by a bratwurst poltergeist” suddenly flew through my mind’ and find yourself alternating between terror and laughter. John Dies At The End is perhaps the most insane book I have read, and I mean that in a good way.