OSSCamp Delhi was held at NSIT Dwarka on 5-6 September 2009. OSSCamp is an unconference on open source software, technologies, and ideologies, one of the largest events related to open source in India. Even as I was travelling by Delhi Metro to NSIT Dwarka on the morning of the first day of the event, I met a guy from NSIT who was going for the same. (He figured I might be heading there too since I was wearing the ILUG-D t-shirt.) Met Kinshul Sunil outside NSIT’s administration building; he works as a community manager at a company called OSSCube, which is in the field of open source software development / training / support. Kinshuk oversees a lot of the organizational details of the event and even with this being a community-driven event a lot of credit must be given to him for managing the event so well. Was handed a name tag; designed by Yadu Rajiv. (Yeah, I know it looks like a name tag for a Rage Against The Machine concert, but they probably don’t use name tags.) Also met other people at the start of the day – Mohak Prince, Sachin Khosla, Ankur Sethi, Apoorv Khatreja, Udit Agarwal, Triveni Yadav, Sanchit Gulati, Anshu Verma.

By 10-10.30am (of day 1) we had quite a respectable crowd of 142 people (I kid you not) assembled in the NSIT Delhi auditorium. The event kicked off with Kinshuk giving a short introduction to OSSCamp. Lalit then urged audience members to give jadoo ki jhappi [which made Lalit (in?)famous] to each other and we had a small-scale free hugs campaign going on for a while (only a handful of the audience participated). The talks started in earnest then. I won’t be going into the details of the talks since they have already been live-blogged on the NSIT CSI society blog – check it out for a short summary of sessions held (a few held at the end of day 2 are missing). 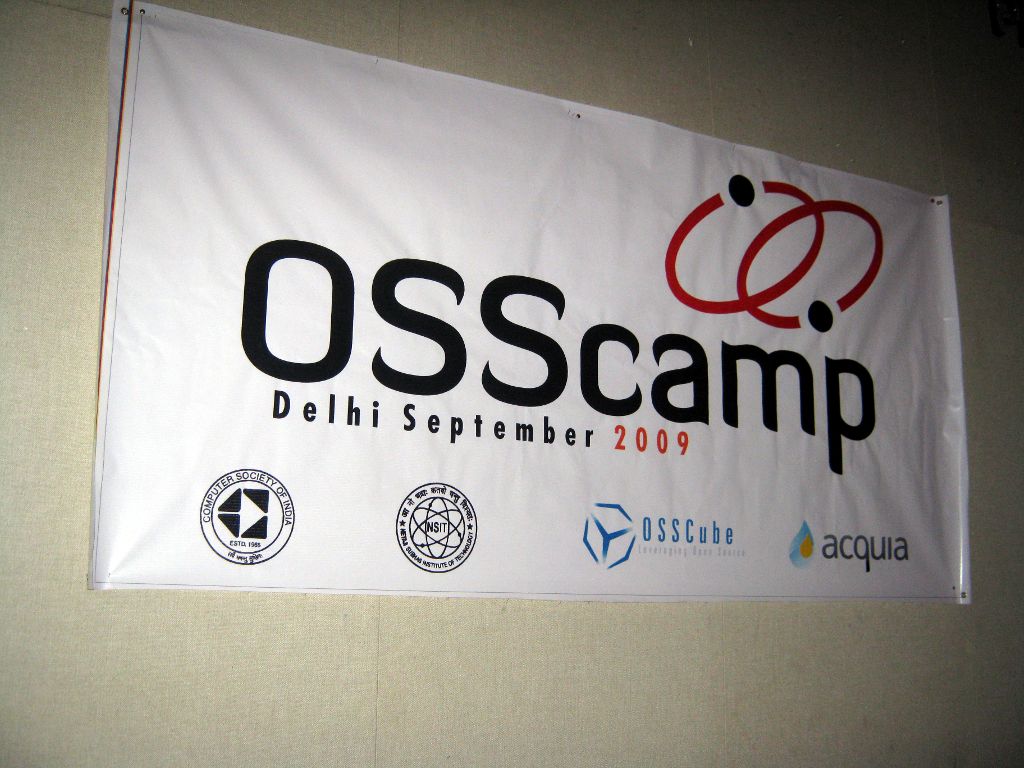 During the sessions, what Mohak Prince and I noticed was  that every speaker mentioned licencing, but didn’t go further into nitty-gritties. We had quite a few first-timers to open source this time who seemed thoroughly confused by this talk of licenses, so we both decided to give a session on Creative Commons licenses. Unfortunately, NSIT administration hadn’t given us permission to set up a WiFi network, and their own WiFi network had been shut-down ever since Ankit Fadia had scared the living daylights out of NSIT faculty, post 26/11 Mumbai attacks. We both were trying to find a presentation to aid our talk so we borrowed a laptop with a Reliance data card from someone and searched out a suitable presentation. We scheduled the session post-lunch.

Lunch took a long time to arrive. It was ordered from some big dhaba (oxymoronic term, I know) called Apni Rasoi or something which is apparently quite popular in Dwarka. Post-lunch the number of attendees reduced drastically, so I decided to postpone the Creative Commons session to day 2. Clearly, there is some such thing as a ‘free lunch’ at least at an unconference on open source – and that was what some seemed to have come for. Although I wouldn’t blame them entirely for wanting to leave, since some of the talks in the morning had nothing to do with open source. On of the highlights of the day was a video conference with Bryan House of Acquia on the future of Drupal 7, but could not be carried through because of low bandwidth issues (we had to switch to text chat and then eventually call it off). What else would you expect on a Reliance data card? After a session on indie game development by Yadu Rajiv, we wrapped up for the day.

Day 2 started off late as it was a Sunday. (I was stopped at a Metro checkpoint for carrying a ‘walkie talkie charger’.) When I arrived at the venue at around 10.15am there were just a handful of people – almost all of them speakers who were schedule to give presentations that day. By 11am though the crowd has swelled in number to around 90 people; quite respectable for second day of an event. We had people from Adobe too to give presentations on Flex and BlazeDS – open source software released by Adobe (!!!) – and those were some of the best designed presentations by far. Students in the audience were given free (as in beer, not speech) licensed versions of Flex Builder. I think it’s a good start by companies such as Microsoft and Adobe to take some initiatives in interacting with the open source community and we shouldn’t be too cynical about it.

Lunch was better on day 2 as we had pizza from Domino’s. While placing the order we had also asked them to provide ketchup sachets. The lazy asses thought “Why bother buying so many ketchup sachets when we can ‘solve’ the problem in one go by providing a 2-litre ketchup sachet”. I didn’t even know that they made 2-litre ketchup sachets! Hilarity ensued, or rather, didn’t since we sent that back. We had a working lunch with presentations continuing while the audience wolfed down pizzas.

One of the most charming things about an unconference is the ‘two-feet rule’: if you don’t like a talk, use your two feet and walk out of the room any time you want. At any given time, you’ll find at least a few people hanging out at the nearest cafeteria having a chat on pretty much everything under the sun. Had a quite a bit of that at this OSSCamp too. Must say that I enjoy this informal interactions a lot! Mohak had also joined us by this time after finishing his exam and joined in on these informal chat sessions.

Bryan House’s video conference had been shifted to day 2 but eventually had to be cancelled again due to low bandwith issues. I had another session towards the end of day 2 – a quiz on open source. Mohak Prince, a community volunteer for Mozilla pitched in with Mozilla merchandise (laptop stickers, tattoos, badges); Shayon Pal from Linux For You pitched in with a few copies of LFY magazine; Sachin Khosla pledged a .in domain giveaway courtesy Digimantra. And thus, we had goodies to give away as prizes for every answer. Some got the prizes out of sheer guesswork, some got them because they knew the answer; mostly though it was because they Google-searched the answers. :p Anyway, it’s an unconference so we didn’t mind. Click here to download OSSCamp Delhi 2009 Open Source Quiz presentation that I gave at the event.

Soon, it was time to pack up. I still had one Linux For You magazine which hadn’t been given away to anyone in the quiz, so we decided to make it a ‘give-away’, literally. Here’s a video of me as Santa Claus, minus the beard and the ho-ho-ho ‘giving away’ an LFY issue.

Linux For You mag give-away at OSSCamp Delhi 2009

We had a customary group photo session after that. As I browse through these pictures on my laptop (I will be uploading the full set of pictures soon; currently my Internet connection is down and I’m posting this via GPRS), I feel a bit sad about the fact that this will be last unconference that I will be attending in India for a while. Over the past one year, I’ve made such good friends and got to know some great people through the string of such events that I have attended. The amount of enthusiasm that community members at these events show is simply amazing. I shall certainly miss the buzzing energy of upcoming unconferences! 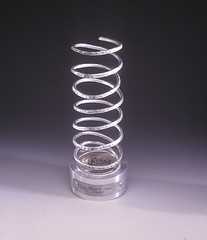 photo credit: otherthingsSouthParkStudios.com – the official website of award-winning TV series South Park – has been nominated for a Webby Award in Entertainment (Humor) category! The Webby Awards are the ‘Internet-equivalent’ of the Oscars, previous winners being the Who’s Who of the online world. Webby Awards is famous for its acceptance speech rules: the acceptance speech by any winner must be no longer than five words. (I believe the rules may be changed to make it ‘140 characters’, IF Twitter finds a business model AND becomes a sponsor of the Webby Awards.) I wonder what Trey Parker and Matt Stone are going to say when (if) they win this award.

SouthParkStudios.com can also win a Webby People’s Voice Award. (One set of Webby Awards is chosen by a jury, another set is based on votes from the general public who vote online on Webby website.) You’ve time to vote till 30th April, and then the results will be declared on 5th May. So all South Park fans (and even if you aren’t a fan) please go and vote now for South Park! If you don’t, I’ll come over to each one of my readers who doesn’t vote and kick them squaw in the nuts.

SouthParkStudios.com is beautifully designed and offers a lot of ‘stuff’ for fans too. You can watch complete episodes of ALL shows online, watch shorter clips (embed them on your site even), create your own South Park avatar, download ‘crap’, discuss with others on forums, get behind-the-scenes news, […I’m running out of breath now…], ask questions directly to the creators of the show…[drops due to exhaustion]. My point is, there’s a LOT on the site – and it’s definitely funny.

I’ll leave you with a joke from a recent South Park episode Fishsticks (it only works with guys):

RAPPER KANYE WEST WAS PARODIED IN THIS EPISODE AND HE WROTE A RESPONSE ON HIS BLOG IN ALL CAPS. In the episode’s climax, Kanye West has an epiphany and realises that he’s a gay fish. That whole song was sung by Trey Parker. Listen to complete, uncensored version of the song Gay Fish by Trey Parker (so hilarious!).