Phew. Long break between my goodbye post and this one. Apologies folks, I’ve been busy with trying to get a hang of this place so that I don’t get lost while trying to go from place A to place B. I’m past that disorientation stage now so I can afford to write this blog post.

I arrived at Heathrow on a direct from Delhi, Jet Airways. Boy, everything almost got screwed up when I left all my original documents (visa, allocation letters, etc) back at home when I got to the airport. Thankfully, dad rushed back home and got the documents within time. Must commend the driving skills of my driver to go to and fro RK Puram from the airport within 20 minutes! :O On-board I spent most of my time watching movies on the in-flight entertainment system. I was very concerned before boarding regarding what Jet Airways’s policy is on excessive laughing; the movie specials for this month included The Hangover and Angels & Demons. I have an answer to that question now, and it is – no, they won’t throw you off the plane without a parachute.

My flight landed at Heathrow around 6.30pm local time. Proceeded to immigration soon, where I was glad I packed a chest X-ray in my hand baggage. Because of this swine flu outbreak they’re pretty strict about health control. My immigration was processed within 30 minutes, but those who hadn’t brought a chest X-ray suffered a lot since they had to wait for many hours in a separate line.

Our university had a meet-and-greet scheme at the airport and I soon tracked them down by the blue t-shirts with the university logo they were wearing. The uni was operating a bus shuttle from the airport to campus every 90 minutes, so I waited for some time at the airport along with other Surrey students. We finally left at around 21:15 and reached university at exactly 21:42. Should’ve seen how excited I was when I saw the time. 😀

It was night when we reached the university, and yet the first thing that you see when you reach is this majestic statue of the university logo – a stag holding a key. This is a new sculpture which was unveiled this year in February.

From that day till today, I’ve been busy setting things in order here. When I arrived, the whole campus was pretty empty because only international students had moved in, but since yesterday a lot of UK and EU students have been moving in so the liveliness of this place is definitely going up. I hadn’t registered for a lot of trips organized to the local area (I didn’t know we had to register online, and by the time I had they were fully booked) but I went on my own to Guildford High Street. Really nice place! It’s not a particularly large town since if you want you can walk to most parts within 30-40 minutes, but we have a local bus service here operated in association with the University of Surrey which you can take for going almost anywhere (I got a yearly pass). Found out that human nature is the same everywhere (or maybe not). And one look at the number of Audis, BMWs, Mercedes, et al along on the roads should be enough to tell you that this is one of the richest parts of England.

Folks at the university – staff, new students, old students, members of the student – are all really friendly. We were taken around on campus tours after which I finally know the place well enough to navigate around. Except for the teaching buildings, which all have weird names like AA, AB, AX, AZ, BB; those aren’t even codes, simply the names of the buildings. On campus, we have around 8 or so restaurants / cafes, a laundrette, a supermarket with post office, a bank (NatWest, I opened an account with them yesterday), a bookshop, a massive library collection…

There’s a Tesco supermarket nearby which is huge. Think of something you can buy – and then some more – and you’ll find it there. Including packed chapatis and and ready-to-eat Indian food. I was a bit perplexed when I saw the Maggi packs at Tesco marked as ‘Manufactured by Nestle India’. Doesn’t Nestle bother to make Maggi locally? I’ve mostly been eating microwave dinners since I don’t know how to cook.

At the university, I’m staying in Stag Hill Court. It’s close to practically all important places on campus – Faculty of Engineering and Physical Sciences, most of the restaurants, Students Union offices, administrative buildings. This is where all the action is, so I’m happy! Students are allocated rooms in individual ‘house’ units, with 10 people staying per house. We get free insurance, free Internet connection with blazing fast speeds. We also have individual VOIP-based landline phones in each room operated by Freewire with extremely cheap call rates; a free TV channel package is also thrown in with this bundle. For a quick tour of my room, watch the video above (or click through on the link).

We had an international welcome and dinner day before yesterday where we got to socialize with all international students. Yesterday we had a party at Chancellors (practically next door to my house) where a new band called The Likeness played cover versions, especially good ones from the Foo Fighters (Learn To Fly too!). Now that UK/EU students are also moving in, there are lots and lots events lined up starting from Monday onwards.

So ‘The Day’ is finally here. In a few hours, I will be flying cattle class out of solidarity with all our holy cows towards a new town which will be a home away from for me for the next few years. Yes folks, I’m leaving India today to join University of Surrey in Guildford, UK. I’m joining the four-year BEng Electronics & Computer engineering course there. (This course is a mix of both hardware as well as software related subjects.) As I do some last-minute packing at this ungodly hour, I can’t help but feel excited and nostalgic at the same time!

My journey towards joining University of Surrey began many moons ago, in the beginning of 2009. UK-based universities used a centralized application system called UCAS, and that’s where I began. UCAS allows you to apply to a maximum of five universities – my choices were Surrey, Aberystwyth (Wales), Kent, Aston, and Cardiff (not necessarily in that order). To cut a long story short (I feel sleepy!), I got offer letters from all five universities by mid-May. I now needed to pick one of these. Surrey  is one of the best universities in UK for electronics engineering / computer science. Surrey’s faculty of electronic engineering is at the cutting-edge of research in the field, including working closely with Surrey Satellite Technology, a spin-off from the university’s Surrey Space Centre which has worked on major projects such as the European Space Agency’s rival to GPS. Surrey county is also where many electronics and software firms have their headquarters. Surrey, thus, was by far my first preference among the universities I applied to.

Around the end of May, University of Surrey’s Director of Student Recruitment Dr Peter Marshall (who was a professor in the faculty of electronic engineering before taking this administrative position) visited New Delhi. (This was after I had got my offer letters from all universities.) I met up with him for a chat, and by the end of that meeting I felt that Surrey was the right choice for me. I accepted by the end of the day (via UCAS). I must thank Prannoy ‘Pony’ Sablok, a DPS VK senior and Code Warrior currently studying at Aston University for all his guidance during the application process. Then began the paperwork. I received my visa letter from Surrey towards the start of July. I applied for my visa on 17th July, and just three day later – on my birthday – I got my visa. 😀 That was a pleasant surprise, since visa processing generally takes around two weeks!

My university is situated in the town of Guildford is approximately half an hour away from London by rail / road. I solemnly deny that the fact that Douglas Adams had a soft spot for Surrey (the county) had anything to do with my decision to join Surrey (the university). Arthur Dent stays in Leatherhead, Surrey; Woking is ‘the word for when you go to the kitchen but forget why’; Ford Prefect is (supposedly) from Guildford…and so on. More references to Surrey in popular culture can be found in Harry Potter, Lara Croft, and War of the Worlds. 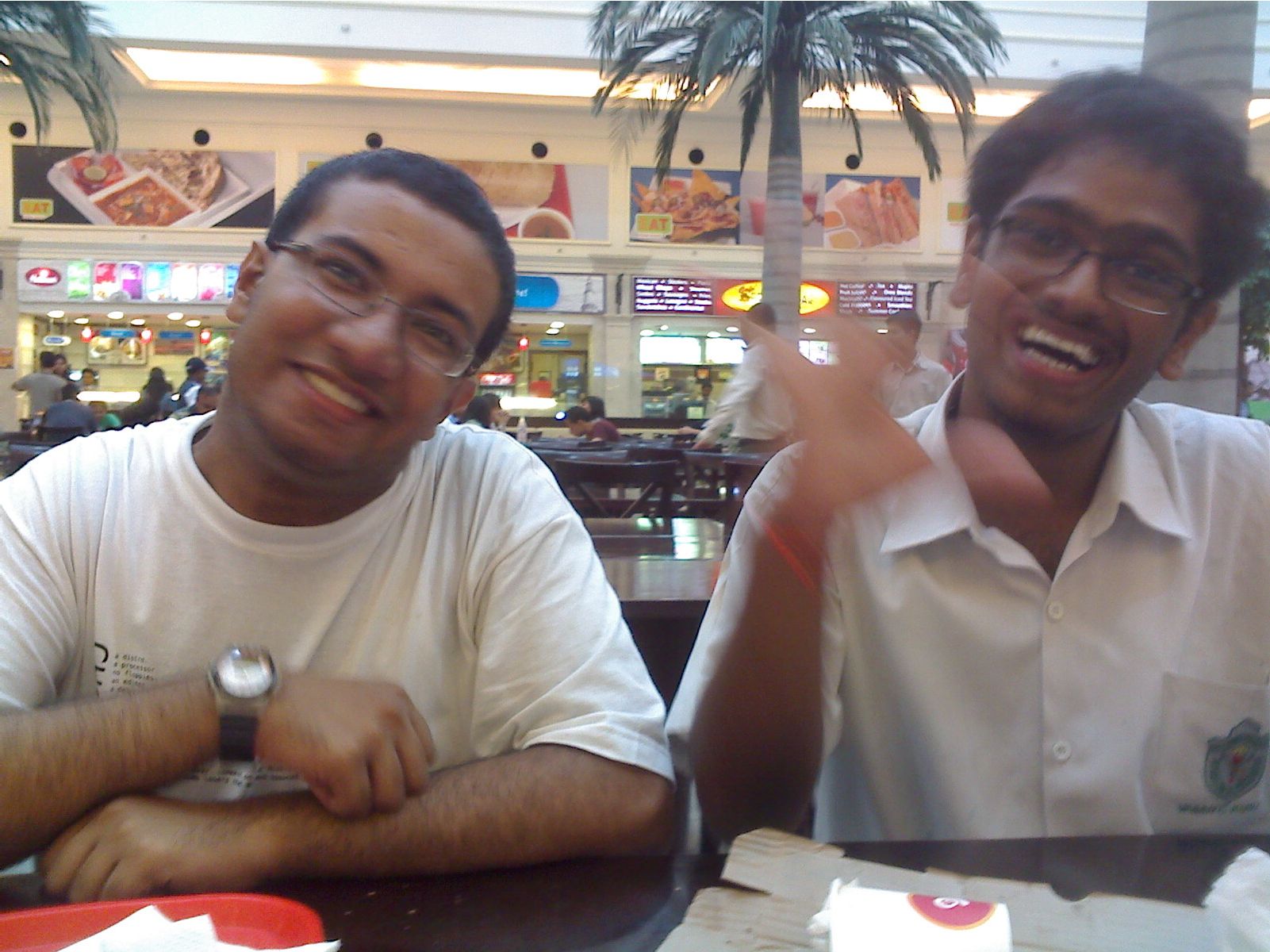 Stationary on an escalator

gyaan.in, the associated meetup, technology (un)conferences have kept me busy too. Which reminds me, i’ve been working on the draft of a novel too. Shshshsh… No more details yet. One thing that I have realized is that writing a long-length work is tough shit. You start working on something, and then you find it doesn’t quite fit in. Maybe I’ll rework those bits, spin them off as short stories and then publish them here some day. Oh, and I’ve been doing this in Google Docs – revision control is a very handy tool.

For the past few months, I have also been working with Youthpad (and to an extent, more.VoiceTAP) as a content writer. Coming up with new blog post ideas for Youthpad daily has been a fun task, although at times I’ve suffered from serious bouts of writer’s block. 🙂 Sadly, with university starting I won’t be able to continue in this position. Anyway, it has been great fun!

University of Surrey promotional video. I *heart* the catchy tune!

I won’t be blogging daily from now onwards (I hear my RSS subscribers breathing a sigh of relief), but I think I’ll remain fairly regular in putting up new blog posts. I’m also introducing three new post categories on my personal blog – Surreyal, about happenings at the University of Surrey; Stiff Upper Lip, for everything else quintessentially British; Take42, which I intend to be a vodcast. I’ll try to incorporate more podcasts, videos, pictures in the future. And just FYI, I think it’d be a swell idea if someone starts a company called Take42 Interactive, as a parody of Take2 Interactive. 😉

Wow. This has been one long blog post. Soon, I’ll be switching over to a new time zone. It’s 6am in the morning right now, and I still haven’t slept one bit. Need to get some rest now. I want to thank all my readers for the immense support and great company that you have given me. And remember, if you need to get in touch I’m just a click away.

So Long, And Thanks For All The Fish! 🙂