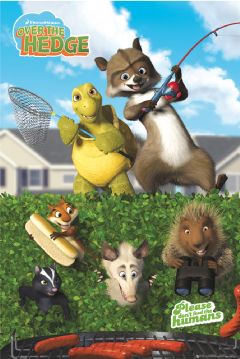 Before the much-interrupted Euro 2008 semi-final between Germany and Turkey began, I was watching this movie on HBO, one I’d seen earlier. Way better than people droning on and on in the studio, asking and answering rhetorical questions. It’s an animated flick about animals, starring Bruce Willis, called Over The Hedge. It’s a movie by Dreamworks, which IMO, makes much more funnier movies than Pixar ever does. Pixar movies humor is aimed for the level of toddlers, concentrating more on cuteness of characters than humor – like Cars. Dreamworks’, on the other hand, uses loads of puns – think Shark Tale, Madagascar, Over The Hedge – which I quite enjoy. Quite amusing to see hear Bruce Willis in a comedy movie; the fact that he’s voicing the main character (of a raccoon called RJ) itself makes me burst out laughing, as you expect him to start spitting out “Yipee Ki Yay, mother-f***er” any time during the narrative. 😉

Watch the Over the Hedge trailer

Of the story itself, Over The Hedge is quite enjoyable, presenting the world from the viewpoint of little critters who forage around in human suburbs for food. It’s a different scale at which these small animals view the world, and the movie brings this out beautifully. Animation quality is superb, especially the facial expressions of Bruce ‘RJ Raccoon’ Willis. Other funny characters are that hyperactive squirrel (voiced Steve Carrell; I really liked this character, after Bruce Willis’, that is), and the skeptical tortoise (voiced Gary Shandling). I rather thought that they under-used the talent of Avril Lavigne (a possum named Heather) in the movie, could’ve done a lot more. Still, in the end, the thing which I liked the most was the humor. 🙂

I liked the movie too!