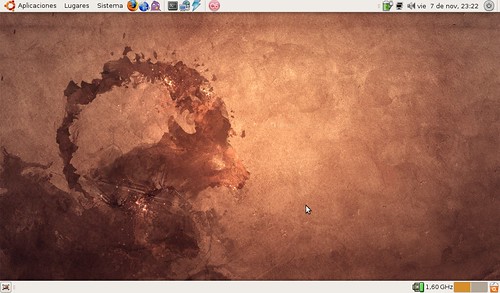 Ubuntu’s latest release – Interpid Ibex 8.10 – ships with a new feature that allows to install itself to a USB drive. This by no means is revolutionary since you could have done this earlier using software like Ubnetbootin, but bundling this feature with the distro itself adds a new dimension of ease to those who’re just trying out Ubuntu and might want to carry a secondary operating system in their USB drive. ‘Ease of use’ since unlike Unetbootin, you don’t have to download a distro or keep / create an ISO file; you can simply use any Ubuntu Live CD you already have. You can access this feature from System > Administration > Create USB startup disk. There is really nothing much you need to do, except plug-in your USB drive BEFORE you start this utility. Ideally, you should do this install on a formatted (clean) pen drive.

In the utility, you’ll find an option on how much disk space you want to allot for documents created in the USB disk session. I would suggest that you keep this amount to the minimum, because no matter whether the documents are there are not that much amount of specified space will always be occupied. Ubuntu makes a ‘persistence’ file called casper-rw with filesize equal to the amount you specify you want to reserve. I won’t get into the technical details, but the moot point is that without reinstalling Ubuntu you won’t be able to change this. You probably won’t create THAT much documents in a USB disk session to fill up the whole minimum amount. You should note, however, that the extra space after installing Ubuntu on your USB drive will NOT be available if you’re running in a USB Ubuntu session – but you can use the pen drive normally if you’re running Windows and / or Linux from hard disk / Live CD. Furthermore, any files that you create and store in the Ubuntu session will be stored in the casper-rw persistence file, and thus not available from Windows. (You can, however, save the files you create to the hard disk of the computer you’re using and retrieve it later using the USB drive.)

With the new USB install procedure you might run into some problems. First you need to ensure that you’re BIOS supports booting from USB drive, and that the boot priority for USB disk is set to higher than hard disk in your BIOS settings. I can’t give instructions for BIOS because it’s different for different manufacturers / makes, but I’m sure you’ll figure that out. The other (more ‘disturbing’) problem that you might encounter is after booting from the USB drive, your computer might throw up this error:

This happens on only certain makes of BIOS and hardware, and isn’t actually anything scary. The solution for this is pretty simple:

Try booting from USB disk next time. It should work now. This is a bug in the USB creator in Ubuntu which doesn’t add the LBA (logical block addressing) flag – which is needed for bootable partitions of size more than 500 MB. A small error, but one which can scare the wits out of some newcomer to Linux who’s trying out stuff.

Everything else remains in the USB disk sessions runs pretty much like booting into a live CD, except that if you chose to keep the persistence file then any settings changes you make are also retained. I seriously suggest everyone to go ahead and create a USB startup like this. It can be very handy in recovering your precious data if your operating system crashes. Also a good idea to use a USB disk when you’re accessing the Internet / working on a public computer (say, a cyber cafe or library) for greater security.

I followed your instructions regarding turning the lba checkbox on, and I still get the “invalid or damaged bootable partition” error message when I try to start up. I’m using a kingston 2gb flash drive and I created the bootable flash drive from the ubuntu 8.10 desktop i386 ISO file. The lba and boot flags are both definitely on. Any idea what I’m doing wrong?

Does Unetbootin have the option for persistance? I’ve used it before for an Eee-Ubuntu install and didn’t notice a persistance option…but there are lots of things I don’t notice…

Plain vanilla Unetbootin doesn’t have that option, as far as I know. Of course, there could be scripts and command-line ways to implement that, but not in the Unetbootin software itself. I suggest you use Ubuntu’s startup disk creator for this purpose.

That’s the problem…usb-creator isn’t working for me. I either get a blank screen with a blinking cursor, Invalid or damaged Bootable partition, or Error 17, depending on the computer/usb drive.

After digging around, it seems to be mainly Dell computers that have a problem with usb boot discs that are made by this program. I’ve used several made by Unetbootin and Pendrivelinux makeboot.exe that have no problems with Dells, but…who knows…?

So didn’t checking the LBA flag as I mentioned here help?

Whoop…nevermind. Working now for some reason. I’ve been monkeying around with casper size and LBA, and it just started working all of a sudden.

Can’t wait for all the bugs to get ironed out. This feature is amazingly useful.

I found that to make the USB Stick boot on a computer with Asus M2N68-VM motherboard, I had to recreate the partition on my 2GB Kingston DataTraveler USB-Stick before it would boot. Regardless of the lba flag.

Same thing here, had to reformat Kingston DataTraveler 8GB memstick before being able to use it. The worked like a charm (Ubuntu 8.10)

Also had the ‘Invalid or damaged Bootable partition’ issue. My Kingston DataTraveler 8GB usb stick had boot and lba enabled already. I think the issue was some small secure partition that Kingston put on the stick. I wiped it all off, reformatted as fat32 and then it worked.

Here’s my question: I set 7GB aside for persistant space. I know it says this is for personal stuff, docs, etc. Now if I go ahead and do an apt-get update and apt-get upgrade, and then run Updates, will these updates themselves be persistant upon reboot to same Live usb?

Yeah, the installs and updates will be persistant. There will be a problem with the kernel, though. It’s nothing serious at all, I haven’t had any problems because of it, but every time you install anything with apt, it will say there’s some sort of error processing something about the kernel (and sorry for the extremely vague paraphrasing…I don’t have it with me at the moment).

This is what it shows when doing an ‘apt-get upgrade’:

From what I’ve read, it’s because the persistent USB installation is still considered a “LiveCD” session, so the kernel can’t be upgraded. I’ve seen a few workarounds for this issue, but none of them have worked for me. But, like I said, I haven’t had any problems resulting from this issue.

So this is specifically for a kernel upgrade, or does it happen if you upgrade any package?

Any package. It even shows up when you install a program through apt:

Did you try ‘sudo apt-get autoremove’? See if that solves the issue.

Tried it, and it removed only one of the kernel packages, and gave the error message at the end.

I suggest that you file this as a bug in Launcpad. Include the output you gave here along with the repeat error after using apt-get autoremove.

I still get “Invalid or damaged Bootable partition”.

I was able to boot an old Knoppix off a 4Gb USB pendrive.

The create USB startup drive from Ubuntu 8.10 apparently sets the correct “LBA” flag, but I get that boot error both with and without LBA flag set on the active “boot” partition.

Any clues?
Thank you!

n.b.: mine is just curiosity. I am able to boot an Ubuntu 9.10 x86 installation off PXE (DHCP+TFTP) server.

I’d suggest trying to repartition the stick by wiping the partition table clean and then trying again. My attempts failed until I tried this trick myself. The factory built partition was somehow incompatible with the boot system.