The movie Max Payne (went to see it today) seems to have been made with just one intention in mind and it excels at it: cause the max amount of ‘payne’ to those conned into watching it. I’m even more disappointed because I was looking forward to this movie for a long time, and it really disappoints. The Writers’ Guild strike has taken a very serious toll on the number of good movies coming out this year (at the last count, practically none). In retrospect I now realize why I was looking forward to this movie: it was the Marilyn Manson song in the trailer which hooked me in – and nothing else. (There’s no doubt about this fact – the trailers awesome.)

I had read reviews of course (mostly from people who’d played the eponymous game) saying that it had nothing to do with the game. As a person who hasn’t played the game himself I hoped that it wouldn’t come in the way of enjoying the movie. It turned out that there was nothing to enjoy. Mark Walhberg has an expression on his face throughout the movie which says, “Man. How did I con myself into doing this movie?!” It works out in his favor though, because he is supposed to be a tortured soul.

The problem with Max Payne is very simple – it’s a good action movie. Except for the action bit, of which there is nothing at all. I kept on praying till the end – “maybe they’re saving everything for the climax” – but that wait was in vain.

OK. I expected no story (the usual case with video game adaptations). Check. I can even (grudgingly) accept no action if the chicks are worth watching. Unfortunately, the movie stumbles on that count too. First, they bring out Olga Whatsername – better known as the latest Bond bland girl from Quantum of Shoelace – in a cute little red number and make her undress on screen. So far so good. (Basically, I don’t like her because she looks like Jennifer Love-Hewitt – who’s so hot – with her head shrunk disproportionately to her body. James Bond probably doesn’t care because “the only blid that matters to him is Jewish blid”.) Walhberg, still thinking of how much he can sue his agent for making him do this ‘movie’, asks her to leave. Then she’s killed a few seconds later – no gore at all (the killing isn’t even shown). Jesus tap-dancing Christ, why do they think I paid to watch an A-rated movie?! 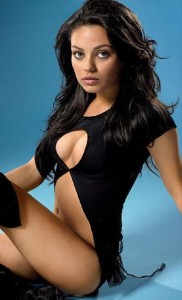 The only hope left was in Mila Kunis, as hired assassin Mona Sax. By this time I was my hands were so trembling with rage that I was showering popcorn on anyone within a 5 metre radius. From what I saw in the trailer, I expected I could at least watch her while chanting “Leather! Leather!…” (Actually, I believe the correct term is ‘spandex’, but it doesn’t quite have the same ring to it when it comes to chanting.) I got as far as saying “Leath…” before she went off screen. Seriously, she practically less than 10 minutes on screen in an almost-two-hour movie. Her only useful role is to appear out of thin air – literally – in a scene towards the end to kill a security officer about to gun down Max Payne.

Strike one – no action. Strike two – no chicks (in measure of on-screen time). Strike three – no story. Really, the story goes nowhere. No action for a full 60 minutes into the movie. Just a whimper towards the end. Seriously, in a movie like this people come to see the gore and the women – not lectures. Why bother spending so much time explaining everything? Give a complimentary booklet containing the backstory to moviegoers and get on with the action! So Max Payne blows of numeric padlocks using a revolver, never mind that every other movie (and real life) try to bypass it using less direct and more plausible methods. Then, towards the end he gets shot multiple times directly with a machine gun. Our brave hero doesn’t feel a thing (the scene would make even Superman cringe on seeing a guy shot in the crotch without feeling a thing) – and proceeds to gun down the baddie. The said baddie had it coming, because he goes to drown our hero in a freezing river but leaves approximately 10 seconds after Payne jumping into the river saying “He’ll freeze to death”. Silly villian. Obviously he hasn’t read Being A Movie Villian For Dummies, which clearly mentions:

Thou shalt wait at least two minutes on screen post-throwing a person into a freezing river. The hero will still survive, but the good karma earned by waiting longer ensures a much more ‘exciting’ death.

‘Nuff said. Watch the trailer, play the game, download a few Mila Kunis wallpapers – and give this trash movie a pass.

This post is more about your hormones than about Max Payne. 😉

You should visit Rotten Tomatoes before you accept your free tickets.

@Abhishek: LOL. 😉 I did read up the reviews, but most of them were about gamers talking of how it didn’t match the game – which wasn’t really a botheration for me. As for critics (newspaper ones, foreign or India) I don’t trust them. Times of India gave this…this…abomination of a movie 3/5. 😐

The game was awesome…and THAT was being the biggest disappointment…i wouldn’t mind replaying the whole game if i really wanted a nice story…i’m so glad i watched it online..