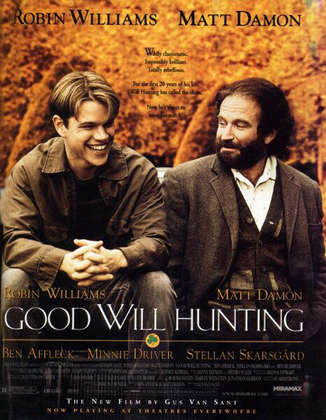 Off-late, my intellectual credentials have been called into question on the basis of movies I review on my blog. “Why review only movies which are bad enough to be easily ripped apart?”. The first and foremost answer, of course, is “Fuck you all, this my blog and I’m going to review whatever I want”. The second answer is “That’s what readers enjoy reading anyway”. I do watch so-dubbed ‘intellectual movies’, it’s just that I review them in lesser frequency on my blog.

The real answer lies in the fact that when a movie is good, well, what on earth are you expected to say about it? That it’s good? Praising the direction, cinematography, acting, visuals, sound editing et al turn-by-turn? People who do this for a living, i.e. movie critics, too are at a loss of words when reviewing most good movies. You can’t give the plot away of a good movie, so there isn’t much to do except sneakily trying to increase the word count.

I saw Good Will Hunting recently. Yeah, I know, really old movie and all, critically acclaimed etc etc – but I hadn’t seen it till now. And I must say that I missed a lot earlier. The thing about Good Will Hunting is that it’s not a movie that is original in any way. When screenplay is written by actors and not professional screenwriters, you don’t expect much. (The screenplay is by Matt Damon and Ben Affleck.) But what you do get in exchange is some powerful, moving acting.

The story of this movie is so completely unoriginal that even Disney Channel Recess has used it once – a janitor with super-awesome-brilliant mathematical skills who’s talent gets discovered serendipitously. Matt Damon plays the role of the janitor – a misfit genius trying to find his place in the world. Stellan Skarsgard, for a change, isn’t spouting out Latin words on behalf of the Vatican; he plays the role of a mathematics professor at MIT who ‘discovers’ Will (Matt Damon’s character). The rest of the movie is about how both Damon’s character and Skarsgard’s character try to come to terms with Will’s genius abilities.

Also in the fray is Robin Williams as a psychiatrist. Skarsgard takes Damon to Robin Williams to help Will sort out his psychological issues. These exchanges between Damon and Williams are the high point of the movie. Both deliver strong performances, and it’s refreshing to see Robin Williams do a non-comedy role so admirably well.

Watch the Good Will Hunting trailer

In the end, Good Will Hunting is this completely unoriginal yet intensely likable movie – purely for the acting. Matt Damon shines through showing the breadth of characters that he can take on. I suggest you also watch The Talented Mr Ripley and The Departed for more stellar performances by Matt Damon. (I give that movie an A+ ‘Oscar-worthy) on my ratings.)

9 replies on “‘Good Will Hunting’ review”

Good Will Hunting was so much more than you made it out to be in this review–Damon’s character was just too freaking awesome. Man, small wonder those two got an Oscar for writing this movie!

That’s what I said! The acting in this movie is superb, but the story isn’t anything to write home about. ‘Best Original Screenplay’? Seriously, Oscar jury, you can take some strange decisions. The other nominations and wins are perfectly deserving. Matt Damon should have won too.

arrey, i’m talking about how the character’s been written–i haven’t seen such a well rounded character in quite some time…yeah, damon should have won, williams really deserved the Oscar he won, and damn it man, Damon and Affleck really really did earn that Oscar!

It’s NOT about how the characters have been written. It’s about how well they acted out their parts. The story itself was lame, but it’s the acting which outshines everything. I’m sure most of those dialogues weren’t written down and ad-libbed instead. There was so much…spontaneity in each scene!

Ha, I remember watching that particular Recess episode too 🙂 Though never really realized the plot similarity.

Hey, when do you think you’ll be fit enough to venture out? Obviously not by Saturday, but still…

Probably not by Saturday, but by next week / next weekend I think I’ll be OK. Hopefully. 🙂

I saw the movie’s poster on your blog and the poster in someway said that the movie would be really good…
I downloaded and watched it yesterday..
And I HAVE to say…Thank you…I finally got to see a movie of SUCH class after an amazingly long time…(Last one was The Beautiful Mind, I think)…
Anyway its one of the best movies I have ever seen…
The best part about the movie – better than the acting – according to me was the background score. It LITERALLY said more than words..

Anyway can you please suggest more such movies..I’m craving for them..

Wait. You asked me for some movie recommendations and I gave you a list of (mostly) Denzel Washington movies. But hey, they’re good!

I have seen Apollo 13, The Hurricane..They were pretty good..(PS : I am a HUGE fan of Tom Hanks)

Anyway thanks a lot…Will go for Crash 1st..