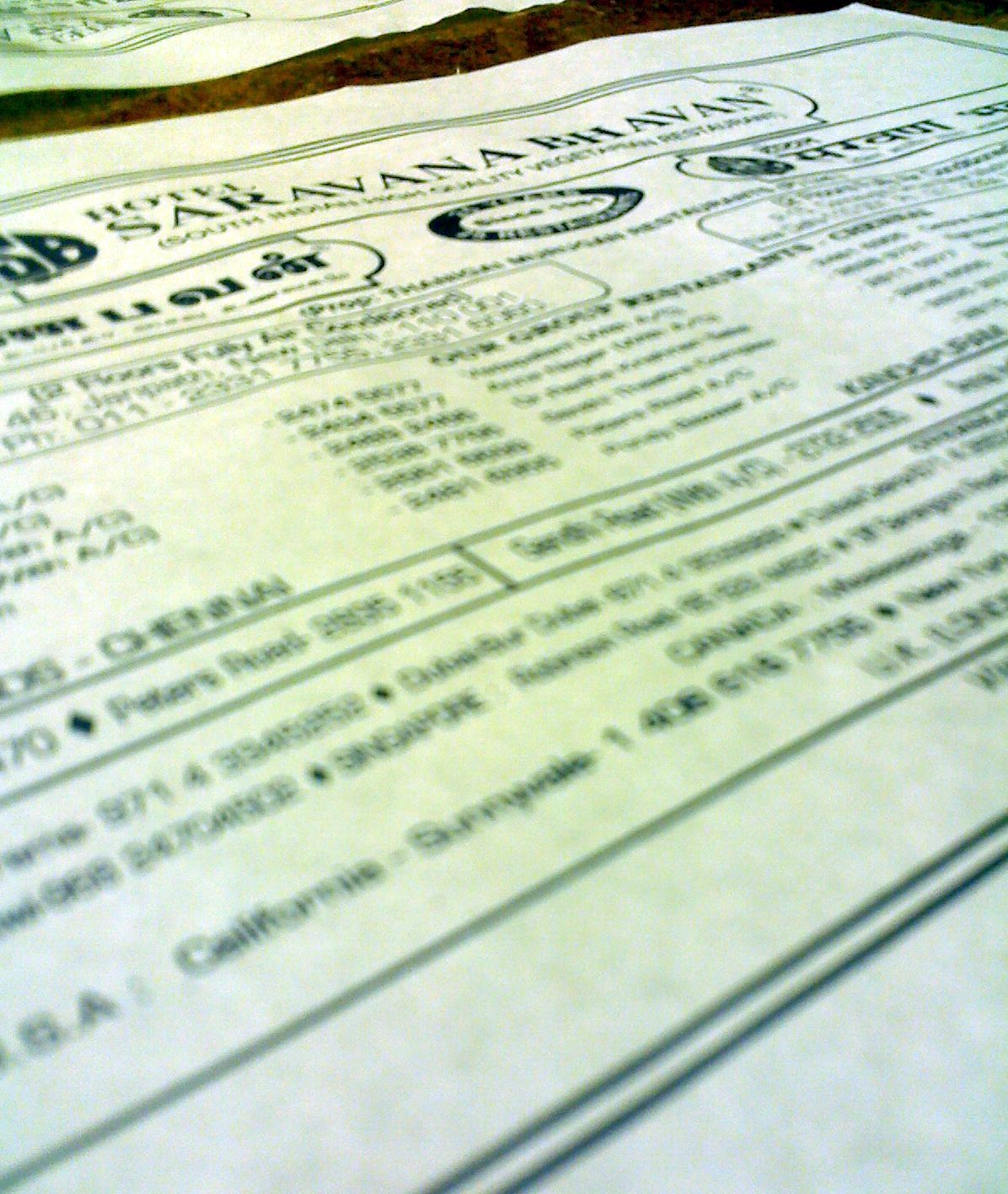 Saravana Bhavan is a popular South Indian cuisine restaurant situated in Delhi’s Connaught Place. Often considered as ‘the best place on this side of the Vindhyas to have our kind of food’ by people with handlebar moustaches, I decided to give it a try.

Saravana Bhavan is an old-school type eatery which still refers to itself as a ‘hotel’. You’ll invariably have to wait if you haven’t made a reservation; it’s a popular choice for family dinners from the looks of it. Unlike chic places who think it’s kosher that whoever has to wait must stand, they do provide a few plastic chairs strewn outside the entrance for people to sit.

As expected from a place popular with families, the ambiance isn’t particularly quite once you get in. It’s quite noisy in fact. You’re presented with a pamphlet boasting the other locations they’re at – including Sunnyvale, California – before you’re given the menu. Compared to pricing in most other places Saravana Bhavan’s menu could be considered expensive but not overtly so. (Later you’ll discover it’s not even worth that.) Completely vegetarian restaurant. You have a respectable number of choices for most categories – dosas, uttapams, etc. For a group of people your bill will probably come to around Rs 500-800 depending on how many people you’re talking of, and what you eat. (My case it was four people.)

Orders take around 20-30 minutes to arrive. Strangely, appetizers are sent along with the main dishes so don’t bother ordering any of those. Food is served on plastic trays with a banana leaf piece added for show. It also helps boast “Oh look, how much kokkonet oil we’ve used” as the oil glistens more a leaf than a plastic tray. You get the usual sambar and different kinds of chutney. While your dosa itself would be hot the same can’t be said about sambar. All you get is tepid liquid vaguely resembling some sort of dal. Replenishment are charged extra and you get the same cold shit again.

What you must definitely try out is the ‘dry fruit dosa‘. Until I saw the menu there, a ‘dry fruit dosa‘ was a mythical creature food of the gods found only in Sidin Vadukut jokes. It’s basically a masala dosa where the dosa batter has been mixed with dry fruits. The taste is quite…new…but also sweet. Too sweet according to some. Maybe the idea is balance that out with the dosa filling.

Desserts – weirdly named as ‘Exoticas’ and ‘Fantasies’ – are many on the menu. The section on ice cream has many entries with a curious term ‘gorilla vanilla’. Now what the heck is that?! Nobody really had the courage to try that out in case a hundred kilogram primate wearing an apron came dashing out of the kitchen to serve us a delectable ice cream sundae, wrecking most of the restaurant in its wake.

That was enough to send me into one of my uninterruptible laughing fits, reportedly causing others diners to complain that the establishment to ‘call ghostbusters and chase away the ghoul ruining their dinner with shrieks of laughter’. I had to be dragged away before security arrived.

Service is extremely lax. A simple request for a water refill revealed their callous attitude. Guys, we weren’t asking you to go to the Himalayas to fetch crystal clear mountain water. First the request went ignored, then despite requesting multiple waiters it took a good twenty minutes to finally get a refill. Don’t even think of inquiring what a menu items because you won’t get any information of them beyond some mumbled monosyllables.

The impression I walked away with is that while it may have some unique stuff like the dry fruit dosa, Saravana Bhavan is basically running on its reputation and charging more than it ught to. If you want better quality food with a good ‘South Indian’ ambiance then check out one of the Naivedyam restaurants.

Saravana Bhavan used to be good, till it became popular. However, if you want good South Indian food, you might want to try out Sagar Ratnas, they are still pretty good, even though they are popular!

If you do try it out, then do comment here once what on earth is that thing.

shouldnt that be ambience in the last para?

‘Ambiance’ is the American English spelling I think. That’s why spell check chose it.