I went back to the ‘flea pit’ at the start of this week to watch Shutter Island. I have resigned by now to the fact that there won’t be an intermission, so grudgingly stock up on snacks and drinks accordingly. To prepare fully, I’ve even bookmarked runpee.com on my cellphone. (It tells you the most ‘optimum moments’ to run and pee during a film, in case nature calls. Gives you a summary of what you’ll miss at that point.) Odeon has recently started offering candy floss too, and it reminded me of childhood days.

It all began with the customary advertisement overload of course. This Nissan ‘giant paintball’ commercial stood out from the rest. Not as good as this other commercial from Nissan, which might possibly be the best car commercial ever. 😉

That was followed by trailers for upcoming films. I had a moment of enlightenment during that. You know how James Brown‘s I Feel Good has to be used in a montage sequence in any movie billed as a family movie? When the trailer for Cemetery Junction was shown, I couldn’t help but notice how Mott The Hoople‘s All The Young Dudes is almost always used in any movie trailer that is a) set in rural/semi-suburban areas b) quite probably an indie movie c) ultimately, has a feel-good plot. Do moviemakers get a discount coupon if they agree to use the same song for trailers multiple times?

Gritty reboots seem to be the order of the day. Who knew that a bumbling fool à la Robin Hood would get a gritty reboot too, with hotheaded Russell Crowe portraying the lead? I mean, come on. This feels more like Gladiator (and the story too) rather than a legend Mel Brooks could have even thought of lampooning. The movie will be exciting though – with Ridley Scott directing!

One of my greatest dreads when I go to the cinema is encountering tall people. I hate having to spend close to two hours craning my neck to see past the tall dude in the seat in front of me. Another of my greatest dreads is that people in neighbouring seats will be of the variety which can’t stop talking.

The gods were particularly cruel to me that, for I had a tall bloke with spiky hair blocking my vision. What took the biscuit as far as annoying neighbours go was an annoying group that was sitting a few seats away. There was one guy in this group who was translating the whole frikkin’ movie from English to Arabic (or some similar language), loudly at that. Really, they should’ve stayed at home and caught the DVD (with Arabic subtitles) when it was released. 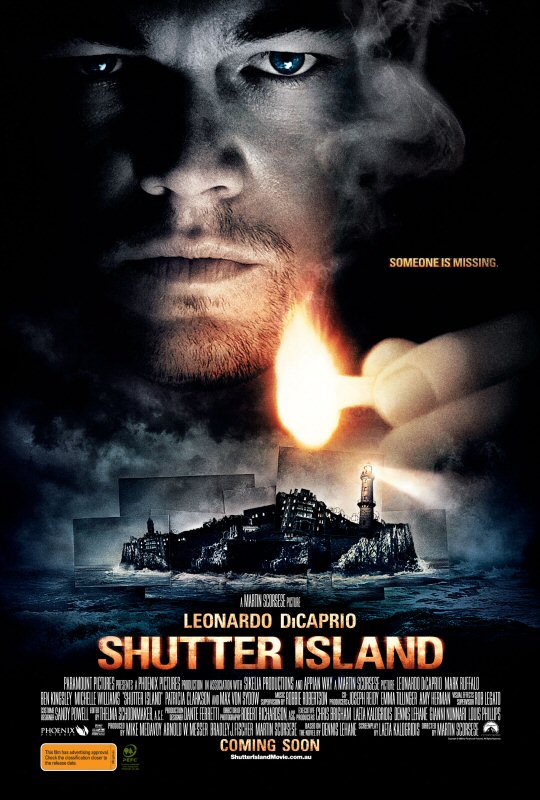 Reviews of Shutter Island have universally been saying that while it’s a good movie, it’s not a great movie – coming from Martin Scorsese. This ‘lazy’ story is being attributed to Martin Scorsese.

While agree with the diagnosis, I don’t agree with the verdict that it makes the movie worse. Why does every suspense need to be in-your-face with tightly shot action sequences? Shutter Island works and needs that slow pacing because it’s a psychological thriller.

After watching the movie, I read Dennis Lehane’s novel version on which the movie is based. Turns out that the movie is an exact reproduction of the novel – down to every line of dialogue. Some changes have been made in the [spoiler] hallucinations that Leonardo DiCaprio has, but apart from that it sticks faithfully to its source material. In that situation, it’s a case of you like the plot – or you don’t. Nothing to do with how Martin Scorsese has done or not.

And boy what a psychological thriller it is! Shutter Island may not reach the iconic levels that Fight Club did, but if you enjoyed watching Fight Club, you’ll surely find this a good movie too.

3 replies on “The Mott The Hoople monopoly”

Have you been watching Juno? That song is in that movie, too.

Yes, it was in the Juno trailer right? See, my point exactly. Always these rural/semi-urban settings, ultimately feel good movies which end up using that song. Strange eh?