I have my end-of-the-year exams going on now. Two down, two to go. Maths on Monday was good but a throbbing hand after the exam reminded me how much more I’m used to typing than picking up an ink-filled writing instrument. I really should be packing my bags right now rather than writing a blog post, so that I don’t screw up my sleep cycle for tomorrow. I need to have most of my stuff packed for shipping back to India by morning. So far, I only have approximately 150 words to show for my ‘effort’.

So anyway, I was bored and was having a conversation about blogging with someone. It reminded me of this short blog post done a couple of weeks ago by Aditya titled Not So Social. I have been meaning to write about the same for a while; it’s just that only now have I got the time to procrastinate. This is not a rebuttal; rather, a my views on the same issue. To summarize, that blog post speaks of how we might be losing the fun in having conversations purely because “there’s nothing to speak about” since “it’s all on social networking sites anyway”.

I’m not really sure whether that’s the case. “So, what have you been up to?” is merely a conversation starter, not a conversation in itself. And it would be naïve to think that mere 140-character status updates or even “a hundred pictures pretty much tells the story”. Life experiences – be they funny, bitter, jubilatory – are complex narratives that no amount of ‘lifestreaming‘ through statuses and pictures can replace.

But what social tools do allow us to do is to have an inkling of what’s going in the life of those nearest and not-so-nearest-but-added-on-Facebook-anyway-because-we-have-mutual-friend. What it allows you to do is to begin a conversation with “So, how did you end up with a tiger in your bathroom after that party?” than merely enquiring a limp “Wazzup?” It does not, in any way, take anything away from the ensuing conversation itself. Conversations are about exchanging experiences, not facts. 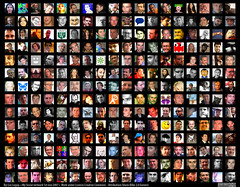 I don’t know whether you have heard of Dunbar’s number, but it’s a theory that humans have a limit to the number of ‘social’ relationships they can maintain at any time. Social tools allow you to keep in touch with your ‘Dunbar’ group, and even beyond that. You don’t have to read everything everyone posts. To take just one example, Twitter isn’t email, nor is Twitter a competition. Friends / followers / cult members aren’t Pokémon toys that need to be collected. (Yes, thank you for pointing out – I know I have strayed from the topic for a bit.) Regardless of that, ‘social tools’ allow you to stay in the loop as to what’s happening in your friend circle, and then gives you the ability to pick and choose conversations that you think can will be engaging.

Speaking of uploading ‘hundreds of pictures’ being posted on social networks, I think Facebook (and to a lesser extent, photo-sharing sites such as Flickr and Picasa Web) has brought about a fundamental rethinking of what used to be a ‘Kodak moment’. In the days of film photography when the west was wild, cameras came with 36-snap films, and processing was expensive – you didn’t take chances. You lined people up akin to an identity parade in front of a landmark and asked them to speak cheesy lines.

The ubiquitousness of mobile / digital cameras means that now you can capture spontaneous moments without a second blink. Sure, this gives the license to some people to upload 378 pictures from a single party to Facebook under an album titled ‘Randommmmmmm 3!&!!&!&’. But if used wisely, (i.e., exercise at least some restraint in clicking, or at least when uploading, pictures) this form of lifestreaming not only gives your friend circle (in the short-term) something to start off with when chatting but also gives you a long-term record of your life at various points in your, well, life. Even Kodak, one of the most hopelessly out-of-touch technology companies, has figured out that the modern ‘Kodak moment’ is no longer the act of taking a picture, but the act of sharing a picture.

You might not think much of it now, but all those byte-sized text updates and pictures albums with spontaneous moments captured is a living scrapbook of your life at those points. Nobody is saying that your online persona is a perfect reconstruction of the real-life you; still, a digital archive of moments is something that you (and your friends) can look back and cherish. This isn’t just about the conversation you could have next week, but the conversation that you could have six years down the line about this week – augmented by your digital scrapbook. (I know, it’s difficult to do so now. Those features will come eventually, as I think enough people will feel the need for something like that.)

What makes me come out so strongly in support of social media? I would put it down to the fact that it’s almost end-of-term, and I just realise – looking back all the content from this year – as to how much I miss not having a more extensive ‘archive’ of my life earlier.

Just remember to not obnoxiously keep your digital camera’s shutter pressed down. 😉

* If you’re the sort who tweets the colour of your poop while on the shitter, mixing ‘lulz’ with ‘dyhrea’ in an ungodly mixture of words post a session of eating cheap quesedillas, then none of the above justifications for ‘lifestreaming’ applies to you. You’re a fucking twat.

That is exactly why I started blogging in the first place and also consolidated all my Facebook status updates in one place so that I could after an year or so read them and re-live the exact moments in which I wrote them.
They may not be like a full fledged diary but at least they allow me to go back in time.
I have tried maintaining a diary and have failed miserably at it, multiple times. Mainly because I feel it is easier for me to smack keys on my keyboard than dragging a pen.

The Annoying Orange Wazzup is not available anymore.

I can access the Annoying Orange video without any problem. Maybe it was a temporary error. I have now replaced the link with equivalent YouTube link.

I completely agree. I find myself constantly looking back at sites like facebook and my blog to find out who i was at at previous point in time. The idea of having a perpetual time capsule of your life is wonderful.

I love the line “only now have I got the time to procrastinate” soo true.

I’m going to miss you Ankur, hope to see you at the lake party! woo!

Your blog is even more narrative-like than mine, in the sense that it truly is what you can call an online diary of events happening. I’m lazier. 🙂

See you at the lake party too!

I was just wondering, What exactly made you write this post?

Partly, due to that blog post by Aditya I linked to in the beginning. Mostly because the academic year is coming to an end, and I won’t be here at university for the next two years. It’s something I plan to talk about at the end of term, on how social tools allow to reflect back, and not just offer a soapbox for reaching out to your friends and telling them what you’re up to.

Yep you’re right. And FB supplies information/gossip not only about ourselves, but about others too, like common friends and you can then have those sessions of “What the hell is she doing dating HIM?” type convos. 😛

Mostly though, I find its usefulness in reconnecting with people who’re not part of your daily social circle. Via social media, you can avoid being phased out of each others lives completely.

I expected the intelligence humans have to be able to do that for themselves. 😛

If cameras can do this, a ‘bad photo filter’ surely can’t be that far away!

“can’t become” when used along with “soon enough” means “let it happen as soon as possible”, rather than the literal meaning. The two comments are in perfect agreement with each other.

I agree with your take. And as Espera said, social networking really shines when it comes to reconnecting with people you don’t/can’t meet or talk to very frequently.

By the way, the two links in your “if cameras can do this” comment don’t seem to be working.

Ad links seem to be working fine for me. What error do you get?