After an initial two weeks of confusion in my body clock (and waking up at 11pm to eat ‘breakfast’), you might find this hard to believe that I wake up these days at 5am without fail. Except when I totally don’t (like this one day when I woke up at 6am instead). This is, I’ve been told by my mom, a ‘considerable improvement’.

Four days ago I went to sleep at 3am but woke up at the now-reasonable time of 5am. By the time it was evening I had drunk two large Café Americanos to keep myself awake. The caffeine rush didn’t allow me to go to sleep despite the fact that I was close to passing out, a feeling akin to being stuck in limbo. Not willing to procrastinate I went apeshit crazy coming up with concepts for future works of fiction on this blog, such as The Slightly Greasy Dosa of Bangalore – an upcoming novel featuring Robert Langdon, and a sociopolitical campaign tentatively titled The Disloyal Subjects of Chetan ‘Underscore’ Bhagat. I spammed my friends with text messages detailing plans for both projects before dropping-dead asleep.

I call this state sleep-drunkenness – and it’s a state of mine that university friends will be familiar with too. There was this one time when we had submit a general electronic assignment and a programming assignment within two days of each other – apart from all the copyediting that I needed to do for a new issue of the student newspaper. I had been working for about 36 hours without sleep, propping myself up with regular “double shot espresso without sugar quick!” at Starbucks. That’s when the fun started.

(Pardon me for any gaps in the narrative that follows. It has been pieced together from what friends told me later.)

Breakfast and lunch were activities that I had skipped on the day that I staggered into our programming lab at 9pm, ostensibly to complete my assignment. I sat there for quarter of an hour absolutely quiet and doing nothing, then finished a pack of Doritos – as I apparently told others from my course who were present – “for dinner”. I then proceeded to search online for pictures of cows listening to music with headphones. You’ll be (dis)pleased to know that such a picture, in fact, does exist. My rationale for this act was that I “needed inspiration for a publicity poster that I was working on for The Stag“. My friends agreed that the publicity poster was indeed funny when I went around showing it to them – and then chorused “Go home and sleep Ankur!”

Reluctantly, I decided to heed their advice. The story isn’t over yet! While I was walking back to my room from the lab I sent a text message to random people in my phonebook saying that I had seen…

…a man riding a motorcycle who had a backpack in the shape of a cellphone – the old kinda cellphone that used to have an antenna stub sticking out; moreover, the whole cellphone-shaped backpack was covered in shiny tin-foil.

Too little sleep and too much caffeine in results in extremely weird behaviour, and I end up doing this more often that you thin.

(I admit this isn’t the weirdest text message. That honour goes to a message I sent once, again to many people in my phonebook, asking where the nearest nuclear bomb shelter was from Guildford.)

In the lead-up to our end of the year exams, I spent most of my time in the library catching up on the all lectures I did not attend, and the ones that I did attend but did not pay attention too. Students from our course used to camp in the library – some actually sleeping and showering in the there rather than going back home to sleep. 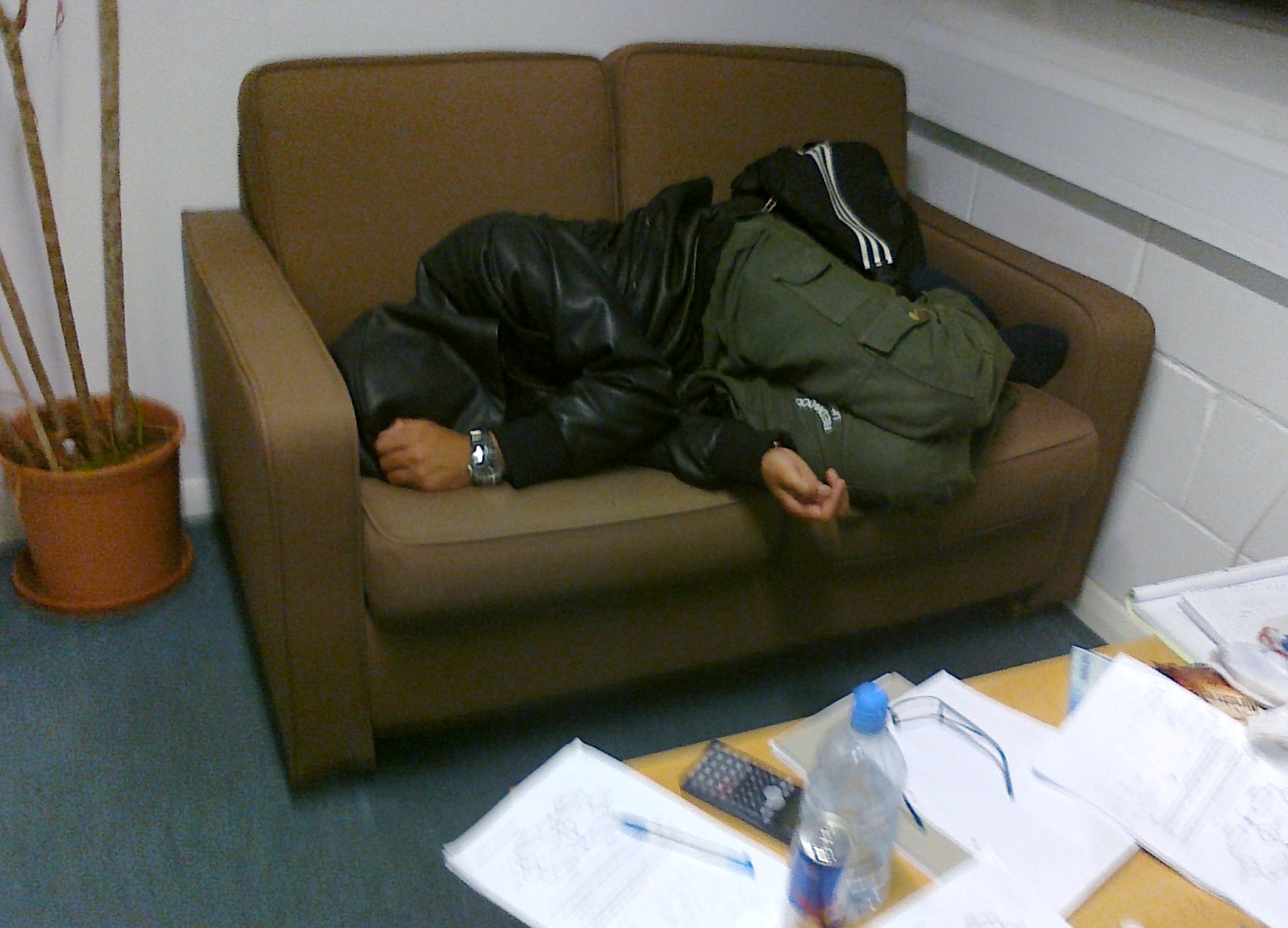 I was lucky that my house wasn’t that far away from the library, so I could pop back for a nap. I didn’t get to sleep much in those weeks either – say, 1-2 two hours at max as I slaved away fuelled by chips, pizza, Oreos, and Red Bull (“They’re like cocaine, only they taste like fruit that someone sat on.”). 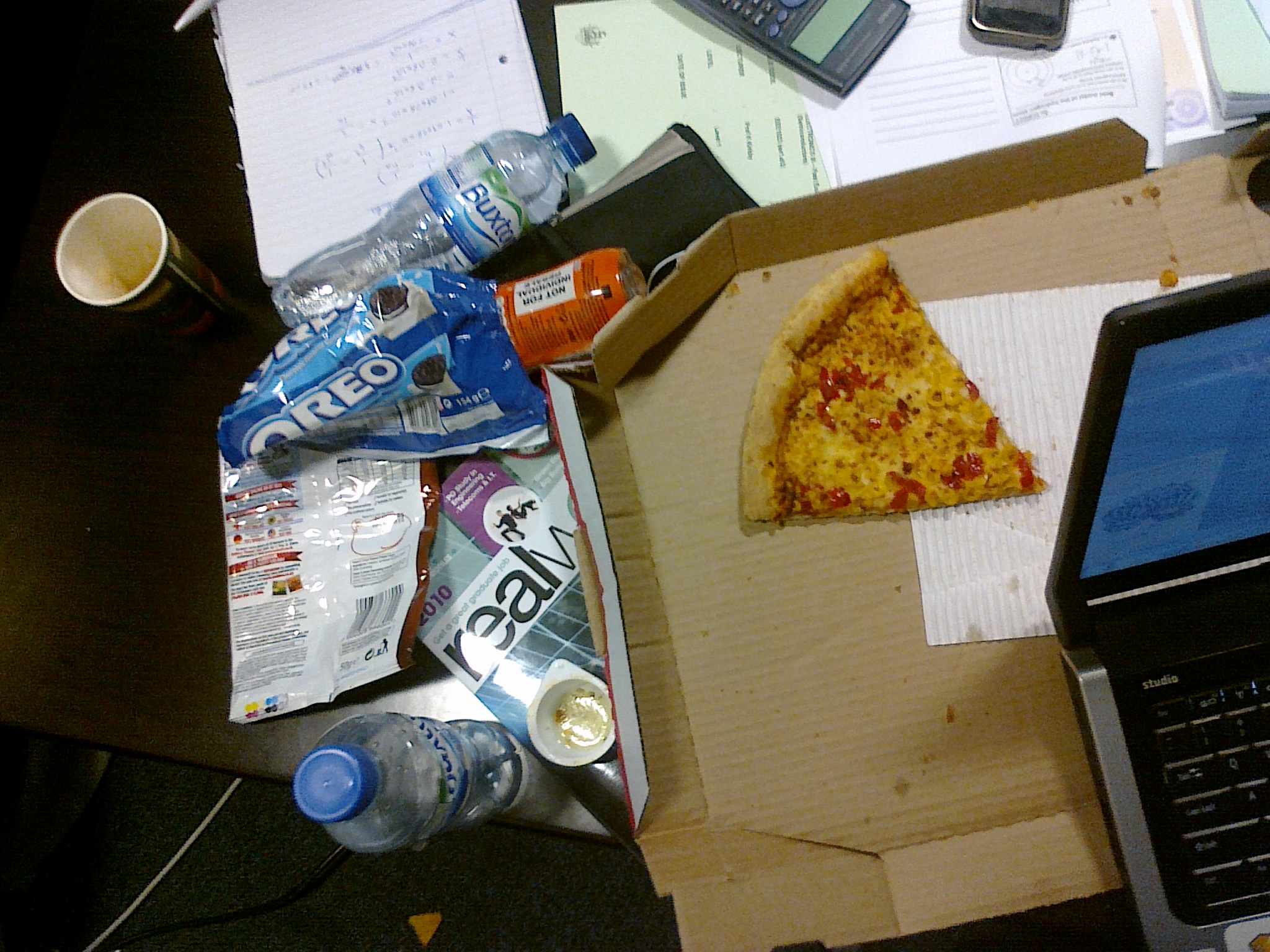 I had to stay awake. I drank about four cans of Red Bull (80mg of caffeine per can) to keep awake until 4am, followed by another can (80mg) in the morning and a shot of Lucozade Alert Plus (120mg of caffeine in a small 60mL shot). In a surprising display of honesty of what its energy drink tastes like, Lucozade made an ad for this product (almost) comparing it to a potion made of “monkey anus glands, male lizard balls, earthworms, and spit”.

With almost 500mg of caffeine ingested in a short span of 7-8 hours coursing through my bloodstream every day, I used to be so wired that a friend actually looked up ‘lethal caffeine dosage’ in medical journals. (Result – doctors know what the limit is for rats, but not for humans.)

My heart is super-strong. 😀 It did not give out nor I did not otherwise drop dead from drinking too much Red Bull.

The condition after many sleepless hours is just plain awesomeness, isn’t it? I imagine it’s what being “high” feels like..

But you are something else dude.. seriously.. i mean nuclear bomb shelter? I can’t stop laughing

I must add that at the time I sent the nuclear bomb shelter text message, I was stone-cold sober – not (sleep)drunk in any way. I was walking to the supermarket when out of nowhere I felt like wanting to know where a bomb shelter was, and I asked my friends about it.

Sleep-drunkenness is nowhere near feeling high. You do all the stupid things associated without the good ‘high’ feeling.

They were too scared of my wrath to say that.

Caffeine does not agree with me, it always leaves me restless and cranky and irritable, and often, in tears. A cup or two of tea is all I can take. But when I really, desperately need to stay awake I prefer expresso shots. Red bull is too ugh, and not enough kick. That said, the best sleep I get is during exams. Uninterrupted 10 hours.

How on earth do you manage to be calm enough to sleep for 10 hours during exams. Oh right, you must be attending lectures.