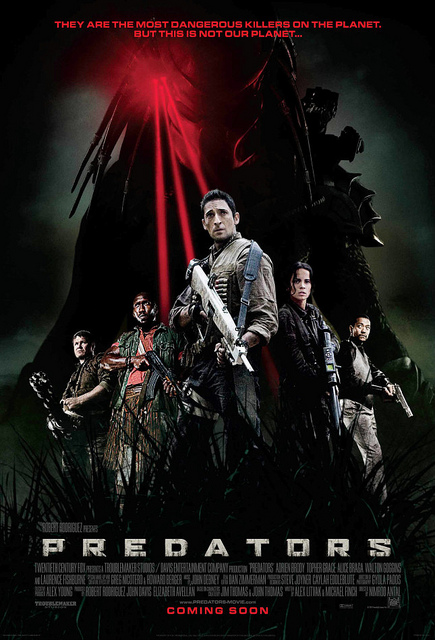 While the original Predator film starring Arnold Schwarzenegger is an epic, the same cannot be said about the terrible sequel and the subsequent clusterfuck of Alien vs Predator sequels that followed. So when I heard that Nimród Antal, the Hungarian director behind the 2007 horror film Vacancy, was going to direct this new sequel Predators, I expected the end-result to be better, at the very least, than the AvP series. (Vacancy is an under-rated thriller; the reason that I liked it is because it’s rare for a horror film these days to not go down the gore route and instead play on primal fears – the unheard and the unseen – throughout the movie. The only certifiably lame element of the movie is the setup made possible by ‘no cellphone coverage’.)

By the way, did you know that JCVD was supposed to be cast as the Predator in the original? He can knock out a rattlesnake with a single punch. What an awesome guy.

Predators is what Avatar would be on opposite day – big alien monsters kidnapping human beings, bringing them to their own planet…and then kicking the shit out of them. (There’s a sequence towards the being where the characters are chased by a multi-fanged warthog-like creature that looks very similar to a scene in Avatar.) What redeems the movie – as opposed to previous attempts such as AvP – is that the ensemble cast of human misfits parachuted into the movie (literally) share a team dynamic that doesn’t appear fake.

The climax pays homage to the original Predator – in the setting at night in the jungle, and in warfare tactics such as use of mud and fire to confuse the infra-red vision of Predators. For the first time, we also find evidence of rivalry among various Predator clans (identified in the movie as ‘Classic’, ‘Tracker’, ‘Falconer’, and ‘Berserker’) that results in a mano-a-mano showdown between two Predators.

John Debney pulls out a few tricks in the soundtrack, using instruments such as Tibetan long horns and ethnic percussion instruments to create deep, rumbling bass-filled exotic sounds that lend an other-worldly feel to environment. (Sadly, the full impact of this was ruined by the poor sound system that DT Star Cinemas Vasant Kunj has, which feel more like a cheap 2.0 channel desktop computer speaker rather than Dolby Surround. To add to my woes, the film projection was out-of-focus in the theatre and DT Star employees didn’t bother then I complained.)

If anything, what makes me give this movie a low(er) rating is that it feels a tad too short. Granted that you can’t do much with a simplistic premise, Nimród Antal salvages the franchise in a way that precious few could have achieved.

Movie sounds cool. I’d better keep it on torrent next week. Nice Review + Thumbs Up for the JCVD .gif !