I love discovering new music to listen to, but what I don’t like is reading reviews on music blogs or magazines to find them. Reading through reviews rather than listening to discover new stuff feels so 20th century to me. Music is emotional for me – as it is with many people – and I’d rather get a feel for something new myself to find whether I like it, rather than just reading words on a page.

(After I find an artist I like, though, I do read up about their history and creative process on music blogs. That’s what they are good for: no matter how obscure an artist, you’re likely to find someone who has interviewed them.)

My go-to source for music recommendations used to be Last.fm. I still scrobble to my profile – partly for keeping track of my music tastes over time, mostly in the vain hope that some day I will be able to unlock this data in a usable form.

Last.fm remains a one-of-a-kind service for archiving music tastes; there simply hasn’t been any replacement over the years for a service like this. Ever since they stopped on-demand playback of tracks though (due to licensing issues; it was simply financially unviable for them to offer it) the platform has been less than worthless for new music discovery. Using Last.fm radio – while good at making automated recommendations based on listening history – is quite cumbersome to use as a standalone application. As it stands now, Last.fm’s discovery mechanism is primarily focussed around surfacing recommendations based on similar tracks / albums…which makes the process of going through all of them a chore.

I have been a Spotify customer for four years now (first, Spotify Unlimited, and now Spotify Premium). It’s every music fanatic’s wet dream – an almost-limitless library of songs, available on desktop, web, mobile, offline that syncs everywhere, and for the artists holding out from adding their works to their library, it’s easy to add local MP3s to your collection.

For over a year now, I was using the We Are Hunted Spotify app to source my music recommendations from. The neat idea behind We Are Hunted was that it scoured the web for signals of what music people were listening to – rather than relying merely on charts such as Billboard – and automatically created digests of what the hottest tracks in each genre were. I loved it, because for people like me who are into indie / alternative emerging music, it surfaced finds that may not even yet be climbing on any official charts yet…but thanks to Spotify’s vast tie-ups with independent labels could still be found in its library. There were times when I discovered music so underground that they weren’t available anywhere other than Spotify, or perhaps, Soundcloud (not even YouTube!). Many of my “What I Have Been Listening To” recommendations came about this way. Every month, We Are Hunted would publish an automatically-generated playlist of the hottest music and make it available through Spotify. I looked forward to this day every month with the same kind of excitement one would for a magazine issue.

Then, it all ended when We Are Hunted was acquired by Twitter. Functionally, it does the same thing that it used to – in a far more cumbersome interface. Now, I need to login to Twitter Music using my Twitter and Spotify accounts, and play the tracks through that interface. There’s no easy way to export the list as a playlist any more, as the obvious intention here is to lock people in to playing music through Twitter’s own interface and / or music apps.

Herein lies the problem with every other music discovery service I have ever seen: they expect the user to play part of the curation process either by selecting ‘channels’ or ‘users’ to follow (such as Hype Machine, 8tracks, and others), or by basing recommendations on individual albums / tracks / artists / playlists (such as Last.fm and countless Spotify apps). The downside, as I see it, is that either way it requires effort on part of the user to constantly prune lists of whom to follow, or in the second scenario to refresh the recommendations manually. This is a cumbersome process! We Are Hunted was doing something extremely unique with the service they were offering. It’s a service useful enough for me that I’d pay for something like it on top of my Spotify subscription fees. (The closest replacement that I have (recently) stumbled upon is Tunigo. It’s still not a perfect replacement though for We Are Hunted as its top-of-genre lists count absolutes rather than ‘rising’ tracks like WAH used to.)

The need for such a service or an app would be obviated if Spotify itself offered an equivalent. It has moved somewhat in this direction with the launch of its new Discover feature. 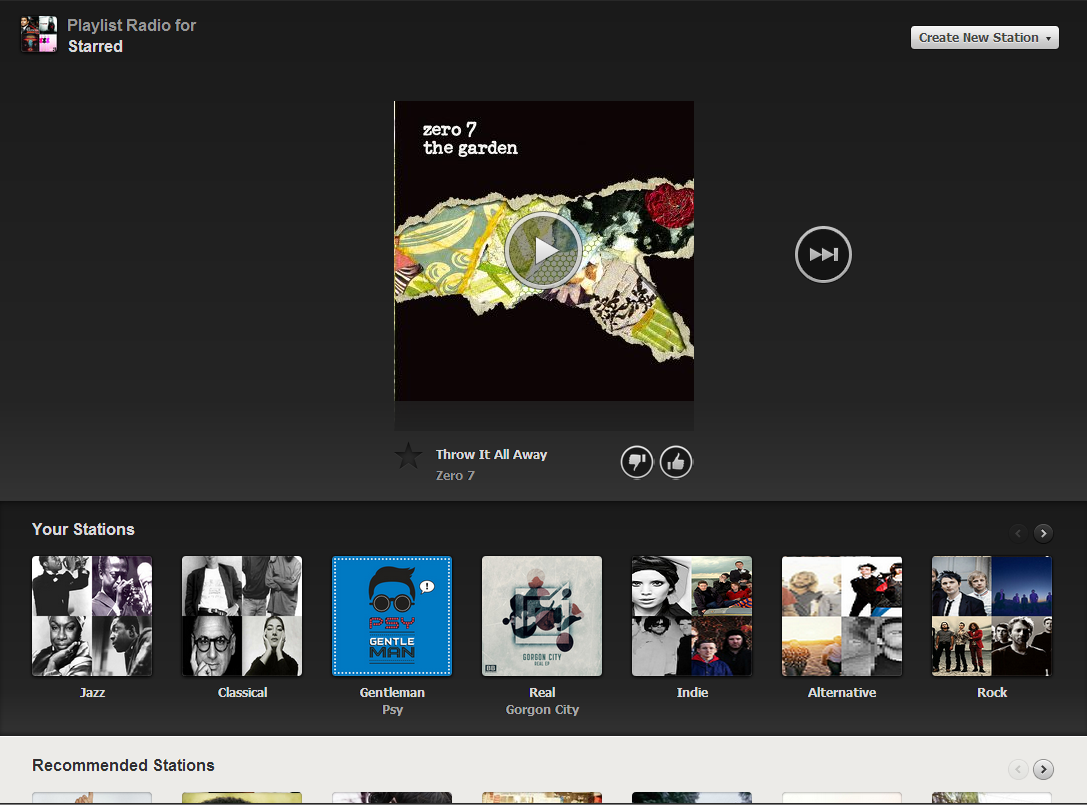 Apps such as We Are Hunted and Tunigo are good, but what I really want is a leanback, interaction-free music recommendation engine – much like Last.fm’s radio feature – that simply melts into the background and throws up one new track after another. Spotify does something similar with its Radio feature, on the surface, but in my experience it isn’t truly a radio service. Instead of having a native recommendation engine, Spotify integrates with The Echo Nest’s music discovery APIs to power its radio functionality – and the way this seems to work is that it generates a static playlist based on a genre, artist, track, or playlist that is queued for playback. The reason why I say this is that whenever I play Spotify radio, it seems to continue repeating the same tracks over and over again. Supposedly, using the thumbs up / down buttons is meant to help its recommendation engine ‘get better’ but all a thumbs down seems to do is to skip to next track, and the thumbs up button to add the track to a ‘Liked from radio’ playlist.

Spotify’s API primarily seems to revolve around playlists – and I can see how for people whose music experience revolves around playlists, e.g., many friends I have on Spotify, this is the perfect model of curation for them. However, for anyone – like me – who wants more robust and automated tools for an interaction-free music experience, it falls short of expectations.

My point is that without a good recommendation engine backing up its radio feature, Spotify is leaving money on the table in terms of user experience. It has such a deep library of music, and yet, discovering it is still primarily driven by last-decade methods such as collecting albums and playlists. I expected much better from a service that is supposedly the future of music.

UPDATE: Twitter launched a Spotify app that allows playlists to be exported. Solves many of the problems I listed here! I’m glad Twitter realised its #music feature was crippled without supporting an external ecosystem.

One reply on “Music discovery is broken, and Spotify Radio is part of the problem”

I’ve been developing a website- http://www.maldio.com/ for discovering music. I’, not saying I solved the music discovery problem, but I am trying to. I read your article and thought I’d share my site with you 🙂