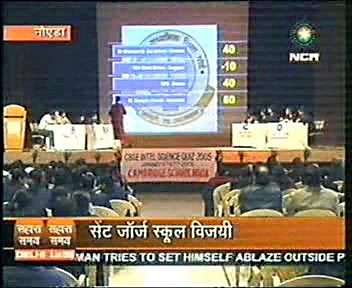 This work is licensed under a Creative Commons Attribution-NonCommercial-NoDerivs 2.5 License.<!–

The Central Board of Secondary Education (India) has about 8000 schools affiliated to it across the length and breadth of India, with a significant number in the Persian Gulf. That, friends, is the scale at which I was crowned National Champion today at the CBSE Intel Science Quiz 2005, and the feeling of happiness has still not settled down.

About 1200 schools affiliated to CBSE participate in the written round, conducted this year in August. Three members from each school participate, from class IX to XII. Each one of the separately answers 100 multiple-choice questions on science.

Then, as it ALWAYS happens in India, you wait a few months for your results.

That came to us in November 2005. The team was ecstatic at having qualified in the most prestigious science quiz in India. We prepared for it (not much, a bit) because they kept on postponing the date when the regional finals were supposed to be held.

The final rounds were conducted at Cambridge School, NOIDA. We went there on 6th January, and found out that we were first ‘in the line of fire’, as we were in Delhi Regional Final 1. It was a big forum, because, of the 1200 teams that participate in the written round, the top 48 in the nation qualify for the regional finals, from the six regions Delhi, Ludhiana, Guwahati, Chennai, Ahmedabad and Ranchi; being selected from Delhi region meant that we were among the top 8 schools in Delhi. These were live rounds conducted by Pickbrain (Giri Balasubramaniam), arguably the fourth best quizmaster in India (after Siddartha Basu, Derek O’Brien and Joy Bhattacharya; amazing innit, all three are Bongs), and his quizzing company, Greycaps. For the uninitiated, he has conducted some of the most prestigious quizzes, like the Limca Quiz and the Tata Crucible Quiz. He told us an interesting story about the origin of the CBSE Heritage India Quiz: it all started over an argument with the Chairman of CBSE, Ashok Ganguly, that not enough was being done by quizmasters for popularization of science.

OK, back to business after that wandering about. There were four teams including us (St. George’s School, Alaknanda, New Delhi) – Rukmini Devi, Pitampura; Amity International, Saket; and Army Public School, New Delhi; in Delhi Regional Final 1. There were five rounds of quizzing, a standard throughout the quiz. The quizmaster was particularly excited about the fact that I was from class X, since most of the participants were from class XII.

We got of to a (much cliched) ‘flying start’ (make that a permanent fixture for all the subsequent rounds). Since Pickbrain is Bangalore-based, most of the questions were technology/computer-focussed, a field I’m particularly strong at, so we got most of those right. Apart from that, there were lots of questions on inventors, inventions, physics and chemistry, all of which I gobbled up happily. The other teams were at a disadvantage here – most of them were from medical stream (even my two teammates were from medical stream, so there was little that they could do). The format for the for the above subjects was mainly trivia-based, my favorite genre in quizzing. We did have questions on biology too, which were pieces of cake for my teammates, who got their (small) share of lunch here, and put us further into the lead. There were different rounds like World of Science (general trivia), Scientific Cross Roads (a crossword round), Clueless (three clues on leading progressively to an answer, buzz in after any clue), Tech Bytes (a COMPLETELY tech round) and Quick Science (a rapid-fire buzzer round). In the end of it all, our team gave a stunning performance, and made it to the top 12 teams in nation, to the national semi-finals.

In Delhi Regional Final 2, the team from Delhi Public School, R. K. Puram qualified. Also, in National Semi-final 1, DAV Durgapur, from Ranchi region qualified out of three teams. An important note – All the other regional finals had been completed earlier, Delhi region was the last.

We went back the next day, 7th January. We were, again to go first. In National Semi-final 2, the teams were Chiranjeev Bharati School, Gurgaon (from Ludhiana region); and Chinmaya Vidyalaya, Kerala (from Chennai region); apart from us. There was a slight change in the format this time – all questions were open on the buzzer, even on a direct. To me this is a very fair system, as everybody gets the same question to try. Maybe that’s because I thoroughly enjoyed decimating the other two teams by ‘stealing’ their tech questions, and shooting into the lead. There were a few nervous moments when the buzzer system started giving an electric shock to me, but that was sorted out by the Greycaps team. The quizmaster commented that ‘this young boy is giving such a shock to us all with his performance that he probably needs a few shocks himself’. Another funny moment was when my teammate gave a completely wrong answer with absolute conviction that Pickbrain said that he would ‘go on to become a great science fiction writer’. We had such a comfortable lead that we didn’t answer a single question inQuick Science, except one where I just couldn’t stop myself from buzzing in with the answer. Thus we steam-rolled our way into the National Final!

Since the team from Army Public School, Guwahati hadn’t turned up, National Semi-final 3 had five team, out which two were to be selected. That way teams had a better chance – since only one team was selected in a
three-team round, the probability of each team qualifying was 33%, while in a five-team scenario the probability increased to 40%. The two teams which qualified were two-year defending champions, Delhi Public School, Bokaro (from Ranchi region); and Sri Sankara Sr. Sec. School, Chennai (from Chennai region). Talkative me, I kept on giving many tech answers that the other teams on stage failed too, even while sitting in the audience!

Post-lunch, we got ready for the National Final. Let’s recall the final line-up:

These were the TOP FOUR teams in the nation, which had qualified after numerous gruelling rounds of quizzing. For a team like us, the pressure was even more to defeat the incumbents, and also we had much less time than the other teams to prepare for this. With the slightest hint of nervousness, we took the stage in front the many dignitaries from CBSE, and media outlets that were giving coverage to the event.

The format was again five-round, and we hit bullseye in the very first question, courtesy me. It was still buzz-in-first-gets-to-answer format (a risky one, as there are negatives on a buzzer), but that suited us, since I ‘stole’ all the tech questions away from other teams. A new picture-based round on tech stories, Picture This gave us a slender lead. A brilliant answers by one of my teammates (on ‘programmed cell death’) put us further into the lead, and might have caused quite a flutter among the other teams as that put a significant gap between us and them.

Then came a round that sealed the fate of all the teams on stage. A very challenging round called Think Lateral, which was based on finding connections between audio-visual-pictorial clues presented on-screen (it was a well-organized quiz, with interactive elements on-screen). Technology to the rescue! All tech based, all lapped up by me. I must say it was a pretty ingenious round, but I don’t think the other teams found it so, because they were scratching their heads at what had been thrown at them. Maybe it was a bit unfair to other, since they were all medical stream students, but in a science quiz, you are supposed to know all this, lack of knowledge in a field is NOT acceptable in a quiz contest, since having that knowledge is exactly what your job as a quizzer is.

This round practically put us out of reach of anybody, for a second time that day. So we again relaxed in the Quick Science round. The battle was now on between Sri Sankara and DPS for the second spot, since DAV was too far behind to catch up. The end of the round saw a tie between Sri Sankara and DPS, thus forcing a tie-breaker; which won by DPS. The pressure (and the Delhi cold) got too much on Chennai, when asked for the name of the scientist mentioned in the clue, they said Amartya Sen (!!!!), while the correct answer was Kalpana Chawla.

Thus ends the story of how we became National Champions. The team was a bit disappointed since we didn’t get to lift a trophy, just a cash award of Rs. 20000 and certificates, but it is the position that counts for me; that FWF (fuzzy warm feeling) that you get on knowing that you are (atleast for one year), THE BEST in the nation. Later, we also gave interviews to the mediapersons in an impromptu ‘press-conference’, and packed up to come back and defend next year, maybe with a slightly different team.

I continue the endeavour for excellence in quizzing, but for now, its back to school for our pre-boards (or maybe, pre-boards). Just amazing, the contrast, quizzing is so fun, and you actually get to learn a lot, the exact opposite of the rote-learning emphasized in school.

This work is licensed under a Creative Commons Attribution-NonCommercial-NoDerivs 2.5 License.<!–

Erm, sorry for being so late for telling you guys about this, but I was VERY busy the last few days.

Apologies handled, now I can go ahead with telling you about this contest. Wait! Let’s celebrate first, coz I came first there. FAPS Quizzical Quest 2005 was conducted at Frank Anthony Public School (FAPS), New Delhi on 15 December 2005 as a part of its inter-school competition, Symbiosis 2005. Titled Quizzical Quest, it was a science quiz. Also being held were other events like Alchemy, the science symposium, and a computer programming competition.

A significant number of schools came, like DPS (Mathura Road), Amity (Saket), Gyan Bharati, Salwan Public, Convent of Jesus and Mary, Ahlcon Public, etc. (my memory in non-quiz matters is short). Two participants from each school sat for a 20-minute written selection test, which had 45 multiple-choice questions. I suspect the organizer was a biology teacher, because the paper mostly consisted of biology questions.

After that, we had to endure endless reruns of two Linkin Park songs, Points of Authority and Numb. Maybe they only had those, but even good songs sound boring after some time.

We came first in the written round. There were six stage rounds, in which the four qualifying teams participated. Boring, and the questions were damn easy (for us atleast!). These were the final positions:

Overall, a boring quiz. The questions were tough on stage, as we did not have any options, but still this was a pretty small-scale event. The exciting thing was the fight I had with my partner, over who gets to keep the individual trophy (the school got one too). We compromised and decided to exchange it every year.

If you have gone off to sleep by now, good night.