The school and open quiz to be conducted by Cradle Sports was held yesterday. A brilliant quiz, and my first ‘Parnab’ quiz. I reached in the morning because I wanted to see the school edition of the quiz too (to get an idea about what was to come in the open quiz). At first when I reached the venue I was confused as to whether there was a quiz. I finally found that it was in one of the other halls in the Siri Fort Auditorium compound. The school edition saw a very enthusiastic response, going by the jam packed auditorium. And note this isn’t like Times of India Fun-da-Mental or HT InQuizitive where most of the people are cheering teams; these people in the hall that day were quizzers who wanted to be there. So it’s nice to see such a large turnout. I saw quite a few people I knew there. Unfortunately, DPS VK couldn’t make it because pre-Boards are going on and most of the quiz team is either in 10th or 12th.

I missed the school quiz prelims but I got to see the school quiz semi-finals and final. Lots of DPS RKP teams qualifying, apart from the extremely capable team from DPS Dwarka which had Utkarsh and mini Ankit Sud. Also nice to see that Sardar Patel Vidyalaya find talented replacements for Vinayak Sapru and Pulkit Gupta. St Columba’s School is always a force to reckon with, and they proved it by winning the quiz (Chirag’s team). DPS Noida’s team also seems promising with Rishav except that he’s way too cocky to make it to the top anytime soon.

Surprisingly, the open quiz saw lesser response than the school quiz! But it was nice to see a lot of school teams stick around and at least try the prelims. I was participating in the open quiz, teamed up with Prateek Vijayavargia, Chandan Shahi (runner-up of Brand Equity Quiz 2008), and Manazir Wasi. The prelims were tough with a large gap between the toppers of the prelims and the ones after them. Our team scraped through onto the finals. We totally got PWND at that stage. Except by the SPV team which didn’t score, but you gotta give them credit that they made it to the finals too. The finals had a lot of old Bollywood stuff which nobody on our team was good at. Between the other colleges teams who do bother to keeps tabs of that kind of stuff, the competition was quite close.

That brings me to the question which people interested in quizzing would have been dying to know when reading this article – how was Parnab Mukherjee? I admit, I’ve ‘heard a lot of stuff’ about him in past on many quiz blogs but it was nothing like that! Look, I can’t talk about the past because without having been present at those quizzes I can’t pass a judgment myself. I can talk of what I saw at the quiz yesterday, and what I saw was an excellent quiz. I believe the attendees who were there will also agree with me. The questions were good and didn’t come across anything which was ‘outrageous’ in the sense that people talk of. It was an extremely well-balanced quiz, with no team getting too easy questions. Most of the questions were workout-able, which is the proper style to go for to get students interested in quizzing.

Parnab Mukherjee’s feat is even more impressive when you consider that he’s recalling questions from his memory. If you’re a quizzer, you know exactly how difficult it is to recall even ten questions in succession at a moment’s notice. More so when you have to do a balanced quiz. As far as I gathered, the questions were not ‘made up’, as some people have claimed earlier about his quizzes. I randomly checked up a few questions which I remembered and I didn’t find one wrong. So as I said, I don’t know about the past experiences others claim to have had, but what I saw at yesterday’s quiz was a good quiz. 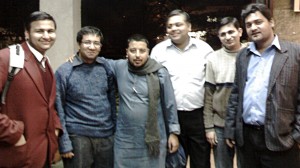 After the quiz got over, I got to interact with Parnab a little longer over a late ‘lunch’ (if you can call it that) we had with the Cradle Sports team. (Prateek and Prashanth were there too.) Arindam Bhattacharya of Cradle Sports, himself a quizzer (he competed against Aditya Mubayi in his school days) is a really friendly guy. It’s a good thing that he sought feedback from the student community throughout the quiz. In Arindam and Parnab Delhi has two guys who are truly passionate about quizzing. We had a nice chat where Parnab spoke of how instead of preparing by reading quiz books students can learn simply by knowing more about their surroundings. He gave a nice example of how much history you can associate simply while going from point A to point B in Delhi. Prashanth, who’s from Hyderabad, asked him to show a similar example using a route between two places in Hyderabad – and Parnab came up a perfectly valid trivia question (which Prashanth admits is true). I hope in a future quiz maybe the Cradle Sports guys can arrange for Parnab to have a short talk before / after the quiz. Nobody is saying that you should prepare for quizzes only by zipping through Delhi roads, but the main concept behind preparing for quizzes as natural process instead of a ‘forced’ thing using books is something students should at least be made aware of.

You can check out an old archive of questions by Parnab Mukherjee here (ZIP, ~805 KB). One thing’s for sure – any future school quiz by him would be worth going for school quizzers.

do u have any idea about how to prepare the forum…

It best if we ask Ankur that.
Also its better if we converse thru Mail on this rather than cluttering up Ankur’s blog (comments) for this.

ya lets do tht

hey!
sorry to clutter ur “comment-box”, ankur, but this was an interesting conversation going on here.
firstly, abt anuj’s point of work-outable questions and non-work-outable ones, i feel that the quizmaster is completely justified in asking a question like that, because even for work-outable questions, u need a base of things that u know, on the basis of which u can work out the answers. in this question, he was just testing that base. but u r definitely entitled to ur opinion, and seeing that, i guess u would love the kind of quizzes that are held here (in madras).
abt rishav’s and prateek’s plan, its good to see young quizzers putting a lot of enthusiasm for quizzing! i hope u guys can make a club. at this stage, where travelling to the venue is a bit tough, maybe u can conduct online quizzes, or live online quizzes in a forum. once u become regular, then people will be willing to come to the venues also! anyway, all the best for ur endeavour!
and btw, vinayak sapru is in IIITD&M , whose classes are held in our campus here. i had realized that he is vinayak sapru only a few days back. and he is an amazing quizzer!!

Oh wow, Vinayak’s there? :O Yup, he’s an amazing quizzer. Working currently with Prateek, Rishav and a few others to make a quizzing forum where everyone can participate and discuss quizzing (there are way too few sites which allow that). Should be able to finalize something soon after their exams get over. And as I mentioned before, I completely agree with you on the point of workout-able / non-workout-able questions.

hi Achyut..
am from ur skul only….howz life @IIT….
so whtever quizzez u went for ..if u hav any quizzing archieve on u….can u send tht to me….???

hey!
i didnt know u were from my school!! dps noida?
ya i do have a lot of quiz archives, but many of them are from ankur’s archives, and many from quiz blogs.
check this site out
http://www.quizblogs.com
and this one

it has a link to all major quizzing blogs. i will try and send whatever i can though.

ya,,,thnk…u..we r aiming to do well in columban,NIE and HT pace…dis year..and since….u were the champs…we wd definately want help frm u….for our budding quiz..team..which is improvin by the day.
my mail id is [email protected]

Hi Ankur,
The link to a set of questions by Parnab Mukherjee points to “MNNIT Parnab Asks”. Most of these questions were compiled for the Online Quiz by the MNNIT Quiz Club and not Parnab Mukherjee. You might wonder how I know this. Well, we were the guys to started this Quiz fest in our college, i.e. MNNIT and had called PArnab for the 2004 and 2005 editions.

Oh, so those are not by Parnab? Whoops! I thought they were!

To my knowledge those quizzes were brilliant and possibly with out Parnab the quizzes would not have been what they were…May be the reason for you being critical is driven by Personal animosity….Sorry for cluttering your space Ankur…Anindya what I didn’t like is failing to give credit where it’s due

Just wanted to share a bit of NEWS we have got the go ahead from MSVV to conduct MOD QUIZ 2009;the likely dates shall be 24th and 25th July..intend doing it in the form of a quiz fest….The official info shall come from School in due course of time….

Thanks any ways for your positive response for the event.

All quizzers feedback shall act as a great help in improving further.

BTW Anindya how are you?

I’ll post about it when details are fleshed out around June (right?). It’s awesome that you guys get to conduct Mod Quiz this year. 🙂

THE INFO SHOULD BE OUT BY APRIL…..

but you can informally spread the word…

April. Check. I’ll spread the word, plus quite a few quizzers in the Delhi circuit have subscribed to this comment thread.