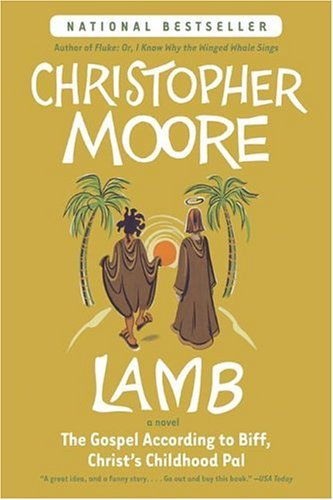 ‘Fantasy comedy’ writer Christopher Moore could not have picked a more controversial topic for his novel Lamb. Inspired by Soviet author Mikhail Bulgakov’s The Master and Margarita (which, in my opinion, is one of the best Soviet literary works because of its satirical nature), Lamb is a retelling of the life of Jesus Christ “through the eyes of his childhood pal, Biff”.

The fictionalised account is a first-person narrative from the perspective of Biff who is brought back to life in the present day to write a gospel that tells the “whole story behind Jesus’s life”. This artistic license arises from the fact the gospels in the New Testament do not cover the early life of Jesus. I was also surprised to learn while reading this novel that much of the commonly held beliefs about Nativity are, in fact, folklore that has been added in relatively modern times.

The novel starts off from the time when Jesus was a kid, tracing his journey as a teenager who realises that he is the Son of God. As they grow up, Jesus and Biff depart on a spiritual journey that takes them across the world to study with three Magi – who are, in the story, a wizard living in Afghanistan, a Buddhist monk in China, and a sage in India. The basis for this is the now mostly-debunked scholarly theory that Jesus travelled to or was otherwise influenced by Buddhism. Regardless, the novel borrows theology heavily from other religious texts such as the Torah (frequently quoted by the characters), the Gnostic Gospels, the Bhagavad Gita, and the works of Eastern sages such as Lao Tzu and Confucius.

The overall tone – the closest parallel I can think of is Monty Python’s The Life of Brian – is somewhat irreverent but at its core, the story is respectful of divinity of Jesus. The controversial aspect of the book arises from the fact that it considers both the fictional Biff and Mary Magdalene as close friends of Jesus, albeit it stops short of calling them apostles. Mary Magdalene, especially, as she plays the role of Jesus’s love interest.

If you’re willing to look past this, Lamb is a rollickingly funny novel that still manages to give food for thought on what morals we should have as human beings. It has Jesus fighting demons, being on first name terms with a Roman legionnaire, rescuing sacrificial kids in India, and making friends with a yeti. In the words of the author, the book has an answer to the ‘eternal’ question: “What if Jesus had known kung-fu?”