I wonder why I haven’t made this post earlier, given that Code Wars 2008 happened on Friday. I was there to conduct the quiz and crossword, and judge the web designing and digital imaging events. Before I begin though you may want to head to this page for Code Wars 2008 related downloads.

We went in for an online submission format for web designing and digital imaging this time. Those entries were judged on 20th. It was more of me cracking jokes with all the Code Warriors gathered around my laptop but we finally got the work done – eventually, when Lord Vader started chanting his mantra. I was highly disappointed to see that none of the web designing participants seemed to have spent much time making their website. Even if you don’t have much time, you can make a website classy by not cluttering it up – or using garish colours. Digital imaging was much better off (you can see some of the best entries here) and saw many more entries. Again, many people went off on the ‘Obama = Osama’ tangent which wasn’t what we were looking for. Quite a few schools went in for totally unreadable fonts. Among the schools which finished first DPS Noida was a strong contender for the second / third place because they had done work with their image, but their entry wasn’t ad campaign poster which we wanted. Points were given for using in-jokes from the South Park universe, mentioning the fact that Butters was the vice presidential running mate (which very few entries did), and displaying the fact that work had been done in making the image. Using unreadable fonts also went against teams.

Day of the Event

Reached pretty late, and went to our ‘command centre’ in the Internet Lab, only to find nobody there. We didn’t get permission from the police to use walkie-talkies this time because of the ‘security situation’. (Drat. I was planning to hold down the talk button and keep laughing like a maniac so that nobody else could transmit – ever seen Mission: Impossible 3?) Coordination had to be done using cellphones and good ol’ fashioned running around (except that as an alum I could make others run around).

Went to the mini audi to get the volunteers to start sending people for the quiz prelims. I had an extremely tight schedule to work on and I wanted to start right on time. Started freaking out when the teams were two minutes late and kept calling Karthick to send the participants. Eventually he rounded all of them up and the event started on time. I was perplexed to see that most of the teams could hardly attempt anything even when I believed the level of the paper was quite easy. Ended up giving quite a few clues. The duration of the prelims were for 20 minutes, after which I started checking the papers (I wanted to do that myself). I was trying to wrap it up in hurry and made a mistake while checking a few papers – mostly missing out on the ‘Mac OS’ answer. Thankfully I detected that error early (while trying to resolve a tie), announced it, reviewed all papers and things worked out. Karthick made the tie-breaker questions because we both decided that if I tried making them, it would probably again result in a deadlock. DPS Dwarka won the tie against New Era Public School. (Not writing ’42’ as an answer cost New Era a position in the finals.)

Crossword started immediately after I finished discussing answers to the quiz prelims. This year we went in for a single stage event on paper due to shortage of time. Initially, I made a crossword containing 80 clues – but then thought that would be a bit excessive and cut it down to 55 clues to be attempted in 35 minutes. Maximum points any team got in this event was 13 – maybe they’d have gotten more in case there was more time. Otherwise, the general feedback was that the crossword was quite tough – even though I believe the terms I’d included in the crossword were ones which anyone who’s been following technology closely should have got easily. Discussing this took some time and I almost overshot my deadline for starting the quiz finals. Since a crossword can’t have any ambiguity in the expected answers, these papers were checked by other Code Warriors while I set up the quiz finals.

Setting up equipment for quiz finals took up some time, which was potentially bad news in such a tight schedule. Agrim was shell-shocked to find me using Windows; I had to boot into that one because the last time I tried hooking up the projector with Ubuntu it didn’t work – not unless I manually edit X.org configuration files. To top it of, I was forced to use Microsoft Office 2007 for the presentation. I had started making the presentation in OpenOffice.org 3.0, saved the file, and then closed it. When I went back to editing my slides all my data was gone! Replaced with a blank slide and no text except for the 6×9 logo. Must be a bug in OO.org 3.0. Needed to start from scratch and did it in Office 2007, not taking chances.

Anyway, the quiz finals started off a bit late. I believe that the Infinite Bounce format is a much more fair way of conducting a quiz, so that’s what I used (not in the audio-visual round though). Got some exceptional performances from Jimi Hendrix, Montfort, Vishesh’s team from DPS RKP – but my biggest round of applause goes to St Xavier’s School. Haven’t come across them in many events, but notwithstanding the fact they came second, their team answered some of the toughest questions in the quiz. In the end the teams on stage showed how good they are by answering more questions than I ever expected them to. Jimi proved me wrong about him being out-of-touch with quizzing. Everyone loved the Japanese shrine question. 😉 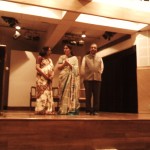 Montfort School put up a real strong performance this year, much credit going to their quiz team comprising of Mridul and Aditya. They won the overall, with DPS RK Puram getting the runners-up position (sent a comparatively weak time, probably because of DPS MUN – their team also forgot to shout “24” 😛 ). 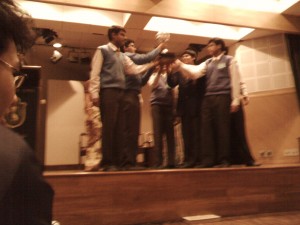 This year’s trophies were better-looking than last year’s, despite being made on a lower budget (Bani ma’am said, “I bargained this time.”). In attendance were Naman Bagga and Gaurav Trivedi (get detailed N-Crypton solutions on his site) – also alumni from last year’s CW batch who came to help in programming and N-Crypton, respectively. Our principal gave his speech…and spared us from his weird theories this year. Romil (the VP this year) was as nervous as Arjun last year when reading out the results. Finally, Feroze came to give the vote of thanks and did something unscripted – screaming out “42” at the end! Everyone was quite stunned and then broke into applause including the principal (who I daresay would have been confused).

The Best Gift Ever

Surprises didn’t end there for me. We assembled at the Internet Lab where I got something which I’ll cherish for a long time – a towel with ’42’ embroidered on it. 😀 Probably one of the best gifts I’ve ever got. [sob, wipes tears of joy with The Towel] Kinda smells of petrol (they dry-cleaned it) but it’s ossum. (Before I forget, me and the other alums also got Tekson’s Bookshop vouchers.) Large, fluffy, white, and forty-two’d…I just love it.

Each and every event at Code Wars started and ended at its scheduled time, which meant everything was wrapped up by 1.30pm. Naturally, this left a lot of time for ‘LAN testing’. Counter-Strike and Half-Life, and I think I’ve become slightly better at this. (Last year, people used to run up and stab me with a knife – just to prove a point – while I’d try to frantically gun them down). I did get killed a lot – mostly by Lord Vader – but I fragged some gamers too at times. Yay! (Jesus tapdancing Christ, having a towel does boost confidence!)

You can see some more photos of the event uploaded by Arjun over here.

Hey! soBIG.tough was my idea!

@Aditya: Oh, we had that idea too. 😉 (When the CW team saw the paper.) I was not really surprised when you came up with that one too.

Oh. Was simply kidding though. Thanks for mentioning our name in the post.

@Shantanu: Man, you plan to walk right up to me and stab with a knife, don’t you? 😉 Such an embarrassing way to lose THE Towel.

How was ur sat score?

Kind of reminded me of the good old days, Code Wars was always great, was the most successful event for me after access. Lots of good memories 🙂

@ Ankur – Yes ofcourse, Code Wars 2008 was definitely tough but one of the best organised events I have seen this year. It functioned smoothly. The level of the Quiz and Crossword was definitely higher, but we enjoyed it ;-)….Would have liked to be in the Quiz Finals 2 – Just wrote Mac OS X instead of Mac OS in a hurry and also “42” would have taken me to the finals :-(…Anyways, that can happen – But It was good to come 2nd in the Crossword, in which me missed some, could have easily come 1st 🙁
Congrats for the “42” Towel – You people, do take 42 seriously…
I have tried the N-Crypton Paper and enjoyed solving it…
Good Job – Thanks to Ankur and the Code Warriors!

@Prateek: I was sad to see you lose out from the quiz finals on those two too. 🙁 The moral of the story is to always write 42. 😉