So, the Indian Premier League 2010 extravaganza is finally coming to an end tomorrow. Nothing really causes as much upheaval among the masses in India as cricket does. This year, it has resulted in a minister in the Indian government having to resign, income tax raids, and the head honcho of the IPL potentially getting sacked too. Over the past weeks, the amount of space Indian media devoted to this event has been staggering – as always.

Let’s take a few steps back, for the sake of my UK visitors. IPL is a Twenty20 cricket tournament held annually in India, run somewhat along the lines of EPL. Privately-owned teams consisting of players from most of the cricket playing nations are signed on to these teams and knockout type sporting event proceeds.

Any visitor of YouTube would at least heard of IPL though, thanks to the loud flashing ads. If you’ve been unlucky enough you’d even have been bombarded with this video-as-an-ad the moment you opened YouTube’s frontpage. Take a moment to see this video I’m talking about.

Jai Ho is a song that has captured a niche similar to that of All The Young Dudes in semi-urban Hollywood movie trailers. You know, ever have those days when you really wanted to make an ad that said ‘India’ but couldn’t figure out what to put as the soundtrack? Why, just use Jai Ho! Also, going by this video, IPL is the bastard child of a one-stand between cricket and dance reality shows.

I’m not a follower of cricket. Never bothered that much about IPL when I was in India. However, when you’re so many miles/mules away from home, nostalgia draws you towards clinging on to whatever you can get. Such as (sometimes) watching IPL matches being live streamed on YouTube.

For most normal videos, YouTube automatically adjusts video quality according to connection speed. Naturally, having oodles of bandwidth here I expected to get a high quality stream. What do I actually get? A rectangular box filled with pixellated mess whenever any sort of action is happening on-screen. You can vaguely make out that a colourful blob is moving from one end of the screen to another, but precisely what’s happening is unclear. High speed broadband isn’t that common in India, so a lower quality stream for slower connections is fine, but if you want to attract viewers overseas you need a decent, viewable broadcast!

YouTube has a lot to prove, since this is the first time it’s live streaming any sporting event – that too with an event on the scale of IPL (duration, money involved, audience, et al). You’d think that with so much riding on this, YouTube would hire competent editors to see the webcast goes smoothly. Unfortunately, ‘competent editors’ is one of other items on their budget that faced cutbacks. I mean, look at the video below.

What they’ve done is they’ve taken standard 4:3 aspect ratio video and squashed it into a widescreen 16:9 format. Listen r-tards, squashing the bejaysus out of a (pixellated) 4:3 video into widescreen doesn’t automatically make it better quality. Nobody at YouTube HQ seems to’ve bothered to notice and rectify this either.

So far, watching IPL on YouTube has been like watching six hours of a Pac-Man game video interspersed with obnoxious ads. Maybe switching the camera angle will help? I thought that this would show the same match from a different angle – that would indeed be neat, but instead it turns out to be a ‘fun feed’. Blinking arrows on the streaming page exhort you to view this ‘fun feed’. Intrigued, I clicked on a ‘fun feed’ video.

This is so much phun. You have to see this video!

From what I gather, these ‘fun feed’ videos are supposed to be a recap of ‘fun’ moments from a particular cricket match. Going through some of the videos at random, I’d say that if these are the best moments of the match, then I feel sorry for the viewers. What you get is a poor quality video: poor quality because it mostly consists crowds not doing the Mexican wave (or pretty much anything); poor quality in the technical sense because you can ratchet it all the way up to 720p HD on and still get the same blurry pixellated mess that you get at lower quality. 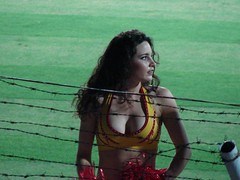 No Fake IPL Player this year to spice up the blogosphere, although a valiant stab at smartass commentary has been made by Eye Pee Yell. RSS shakhas across India would’ve their khaki shorts in a twist over the ‘degradation of Indian culture’ by bringing “booze and American-style cheerleaders” into the mix. Maybe next year we can have everyone drop their bats and fight it out gladiator-style with folding chairs. That will be a true DLF Maximum Citi Moment of Success that I’ll watch.

Enjoy the final of IPL 2010. Until next time, I leave you with this extremely gratuitous picture of a cheerleader.

I just hope this mess that they call IPL is over soon. Nowhere close to as awesome as EPL matches.

Never a big fan of cricket myself. Six hours is too long – even when video feed is not blurry!

I’m surprised that your feeds are blurry though. Because YouTube works flawlessly on 2mbps. Maybe you’re just too used to watching everything in Full HD now.

Any of the recorded videos are absolutely crap quality. Doesn’t matter whether you chose 360p, 480p, 720p (if available) – the quality remains the same. I think what’s happening is they’re taking the source video, exporting it at 720p/480p but reducing the bitrate drastically. I don’t see why they should be doing that. If people have a choice, let them watch higher quality video!

As for the livestream, it’s equally blurry as the recorded videos in scenes where there’s a lot of action on screen. It’s fine for relatively static shots like interviews. The bandwidth monitor on YouTube’s livestreamer shows stream bitrate is 700kbps, but at the same time also shows my bandwidth being much higher. So I’m not sure whether 700kbps is the maximum stream bitrate. If yes, then they need to have an option to offer higher quality streams to those whose connections can handle it. I did think whether our university network is implementing restrictions on these streams for QoS, but I think it’s unlikely. BBC iPlayer, Freewire, SeeSaw, 4onDemand – even YouTube’s own on-demand TV service stream perfectly at highest quality.

That still leaves the question as to why they’re squashing a standard definition broadcast into widescreen. 50 million views and nobody noticed at YouTube HQ that something’s off? Maybe it’s just me but I can’t stand it when aspect ratios are off in any video I’m watching. I’d rather have pillarboxed standard definition video if they have to use a widescreen player size.