Much as I would have liked the irony in awarding this book a 5.something rating, I can’t bring myself to do it. Simply ain’t ethical to give this a rating higher than what I have given currently. Five Point Someone was still bearable because it was, in a sense, a ‘path-breaking novel’ that brought about a flood of me-too alumni genre novels. (There was The Inscrutable Americans before that, but Jajau doesn’t really count.) By the time I read One Night @ The Call Centre I was suitably disgusted. “Never again”, I swore, “shall I read a book so transparently a Bollywood script rather than a novel.”

Alas. Visiting your relatives at a place with no contact with civilization makes you take stupid decisions. (Yeah, this place does have dial-up, but then we know that doesn’t count, right?) You walk into a bookstore to stock up on books to read during the forthcoming trip, the guy at the counter pulls a these-are-not-the-droids-you’re-looking-for Jedi mind trick on you…and you find yourself walking out from the bookstore dazed and wondering why you have bought a Chetan Bhagat novel. Since we’re talking of stupid decisions, let me list down the three mistakes of my life:

Today, kids, I’ll focus on the third mistake. You pick up the book and read the blurb on the back cover:

Based on real events, from the bestselling author of…comes another dark, witty tale about modern India, where God Chetan Bhagat brings out the ethos and isolation of an entire generation to the fore.

‘Dark, witty tale’? ‘Brings out ethos…of an entire generation’? Could this be an old wine in a new bottle, and possibly a wrong bottle at that? Or had Chetan Bhagat truly penned some masterpiece? Obviously not the latter, since a year has passed and nobody has called it so. I knew I should’ve never read this book. Goddamn Jedi mind trick.

I opened to read the acknowledgments, which Bhagat for some reason keeps in the beginning. That’s still okay, because although it’s not the norm yet some other authors do do the same. I read the first line (in acknowledgments), and I froze in terror:

My readers, you that is, to whom I owe all my success and motivation. My life belongs to you now, and serving you is the most meaningful thing I can do with my life.

If there was ever a less veiled threat that said, “By God, I’ll write many more shitty novels in the years to come”, then I confess that I’m the Invisible Pink Unicorn. You know what image this line brought to my mind? It’s this one:

Okay, so Chetan Bhagat doesn’t thank Messrs Bill Gates, Microsoft Word, Little Squiggly Lines Indicating Grammar-Spelling Mistakes & Co as he did in his first book. FPS started with a bang. (I mean, there’s a word for that kind of a start where you mention some part in the middle and then go to the beginning but the exact term for it escapes me for the moment. Like, you know it was there in Mission Impossible 3 too? Maybe one of you artsy-fartsy types can tell me what that kind of a start is called.) One Night @ The Call Center had a start that might be cooked up. The way 3 Mistakes begins definitely makes you feel that it was cooked up. Nitpicking here, but come on, it’s fair game once the blurb says ‘based on real events’ right? The first chapter starts with an email sent to Bhagat from a guy with an email address [email protected]. Quick, I need to dash off to gmail.com to sign up for a Gmail address with an underscore in it. Seems that they’re giving those away now too. Dude seriously, if you need to anonymize or make up stuff, you’d have been better off with [email protected]. Anyway, this guy pops a load of sleeping pills to kill himself, shoots off a mail to Chetan Bhagat who eventually tracks him down through the good offices of an IIM Ahmedabad professor who took excessive interest in Chetan’s college love life, then Chetan practically gets his boss fired, dashes off to Ahmedabad and starts listening to this guy’s story in a hospital. 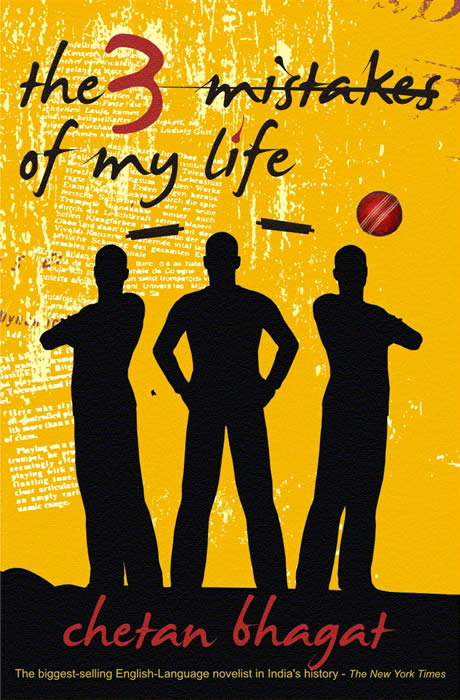 The plot is extremely simple (the guy, who is one of the protagonist, in the hospital is recounted it to Bhagat) and set in (old) city of Ahmedabad. There are these three cricket crazy dudes who start a sports goods store, get mildly good at it, try opening a shop in a mall which tears down during the Bhuj earthquake. Then they find a Muslim kid who’s like, the fucking Neo of cricket (he can see balls whiz in slow-motion), and through him end up in Australia. When they come back, the guy in the hospital – let’s call him Govind – starts fucking (literally, you know) his best friend’s sister under the guise of giving her maths tuitions. Hilarity ensues…until one thing leads to another and the post-Godhra violence is sparked off. That’s about it.

Throughout, Chetan Bhagat goes overboard trying to tell us “This story is set in Gujarat”. So the characters are always eating khakras, dhoklas, theplas and whatnot – even when they’re in Australia! Every frickin’ alternate page you find someone eating a khakra. Right, and I’m a Bong who eats aloo poshto with shorshe bata maach all day. Doesn’t matter that I’m a vegetarian and I could’ve my individual choices, eh? If this book was a Hollywood movie then there would be Russian henchmen sobbing about how vodka is so much costlier in ‘Mowther Rosshia’ these days, while ineffectively holding someone hostage for ‘beelyons’ of dollars before Harrison Ford sucker-punches them in the face.

There are places, however, where the book does shine. A bit, mind you, not a lot. These are mostly the politics / religion related ones, especially the ones associated with the Ayodhya and Godhra issue. This is the sort of stuff that if this book had focussed on more would have made it a great read. Probably though, Chetan Bhagat avoids going to deep to avoid any controversy and end up alienating readers. This shows in how he refers to Congress and BJP as ‘the secular party’ and ‘the Hindu party’ respectively. Maybe he was simply trying to avoid libel suits from pissed off politicians or trying not to get his book banned.

Apart from khakras, every page is a nightmare full of the worst and most stereotypical clichés that you can think up on anything. “Oh look, this book can double up as an Aussie slang dictionary too!” is what the marketing guys forgot to add to the blurb. When our chumps head Down South every dialogue must, of course, be filled with Aussie slang in every line followed by parenthetical inserts explaining what was just said. Rest of everything follows the formula in his previous novels.

Neither the author nor the publishers mind the fact that the books are populist trash. To give you a sense of how wildly popular this book was, within a year of its publication The 3 Mistakes of My Life is in its 48th reprint. (Even The Inscrutable Americans, published so many years back, is only in its 42nd reprint.) Another line from this book’s acknowledgments states

My publishers Rupa and Co, who have fulfilled all my dreams and continue to pursue the goal of making India read.

Now, Chetan Bhagat obviously isn’t a dumb guy if he’s survived as an investment banker for so many years, although investment bankers are probably not considered very bright these days after the market crash last year. Still, he is most definitely an intelligent guy. The problem with his novels is that he has this fascination for Bollywood which means he always ends up writing Bollywood scripts instead of stories. Incredibly childish stories, which only Orkutards who write “lulz ntn odr dan ncert buks n chetan bahgat novels” in the ‘books’ field will like. Seems that Bhagat very consciously writes down to the level of that audience. Maybe if Chetan Bhagat throws in a few pages of colouring, connect-the-dots, and a few spelling exercises in his next novel it will work wonders for those Orkutards. Anything to stop the spread of SMS lingo and oRKuT cAsE if dear ol’ chap can ‘make India read’.

How much Bollywoodization of the plot was there in this novel? No calls from The Alpha and The Omega, but there was one scene where a mob tries to kill a Muslim boy and the leader of the mob is killed by getting whacked on the head by cricket balls smashed in his direction by said boy with a bat, a bat that he can hold astonishingly even after his wrist muscles are torn to shreds by trishul jabs. Dear Mr Chetan Bhagat, please don’t set your sights lower – on Bollywood. Please get in touch with Michael Bay. I’m sure he’ll love to meet a like-minded writer for his future screenwriting projects.

I need to recover from the traumatic experience of reading this book. Time to read some Douglas Adams works.

8 replies on “The third mistake of my life”

Lol, this reminds me so much of this – http://www.youtube.com/watch?v=614jMMrtjW8

You see, you can’t doubt the fact that India IS lapping up his Bollywood-style novels. The 48th print point itself is proof. So you can give the guy some credit.
Maybe he writes this way BECAUSE it’s so popular? I mean, yes it’s unreal and stupid at points, but he does have the readership and he might just be catering to that.

That said, his 3rd book was by far the best one. The 2nd book was entirely bullshit.

Um, yeah, that’s what I said. Chetan Bhagat isn’t a dumb guy, but he ‘writes down’ to a lower level. And boy does it work. 😐

hahahahaha..this is one of the most amusing articles i hv ever read. i admit 2 being a fan of bhagat, bt i do agree with many points u’ve made.

Must be an enjoyable read The 3 Mistakes of My Life by Chetan Bhagat. loved the way you wrote it. I find your review very genuine and orignal, this book is going in by “to read” list.